Well, I Did It

I took my walk this morning and did some laundry and made the bed and took a shower and washed my hair and put on a dress and earrings and even a bra-like garment and why I did those things I do not know because I had no plan to see anyone on our little trip to the coast but my husband.
Perhaps I felt as if he deserved a break from Raggedy Mary.
Our plan was to call a barbecue restaurant on the way down to get some lunch to go and we did that. I was so excited! Food I didn't cook! Hurray, hurray!
And I was still excited when I took this picture. 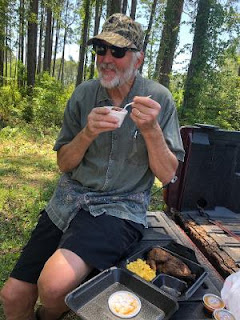 We had pulled over to a shady spot to eat our lunches on the tailgate of the truck and I had chicken and macaroni and cheese too as well as coleslaw.
Ugh.
The chicken was okay. I could not eat the coleslaw or the mac and cheese. Completely inedible.
To me. Mr. Moon did okay with his mac and cheese and his beans were the best thing in the whole two orders. He shared them with me.
"They didn't even give us our dinner roll!" I lamented.
Poor baby. 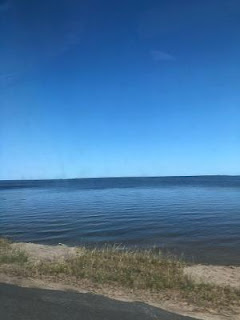 If you look very, very hard you can see Dog Island on the horizon.

So we rode through the woods and we road along the bay and we got to East Point where the marina is and we dropped off the boat. On the way home we stopped in Carrabelle to buy seafood to bring home. Stone crab claws and rock shrimp.
Have you ever had rock shrimp? They are like tiny lobsters and a lot of people don't even know they exist and a lot of other people do know but they think the meat is too hard to get out of the shells which are a bit sturdy. But they are SO good.

And then we drove back through the woods and all the way to Lloyd and I survived. I did. I got a little anxious but I suppose it was good to get out of the house, out of my comfort zone and I did not personally talk to anyone but my husband. I think he was the only person in the entire county wearing a mask which he wore when he went into an establishment. People are insane. And I will admit that it's so easy to relax our vigilance as time passes and we may not even know anyone who has gotten the virus, much less died from it but instead of thinking, well gee, this is nothing, we should be thinking, this self-isolating thing is working! but no, we're stupid humans who think that masks are a bore and a pain and that it's really time to get a haircut and how can that hurt? and by the way, my nails are in such a state! and I'd kill for a lunch out.
Well. Fuck it.
This pandemic is not a vast conspiracy and hospitals aren't getting rich by padding the numbers of who has the virus and doctors and nurses are not holding their phones up to dying patients so that their loved ones can say good-bye because they're getting some sort of weird pleasure out of it.
This is really happening and no one is behind the screen directing it all for some deviant twisted reason and scientists have been warning us for years that this day was going to come and to be ready and we just weren't.
Animals have been passing viruses and bacteria to humans since before we were humans and it's not because of vaccinations and it's not because of mad scientists and it's not because of politics.

Please be safe, y'all.