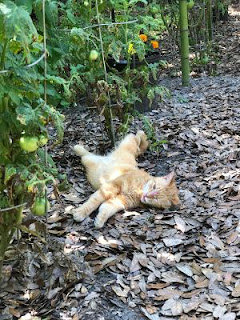 That's a rather goofy picture of Maurice having a roll in the leaves in the shade of the tomato plants as I toiled away, weeding and mulching. She just does love to come hang out with me in the garden and I'm fairly certain it's because she likes to watch me sweat, to laugh at me silently, the way cats do. Now she's napping on the table where I'm sitting. 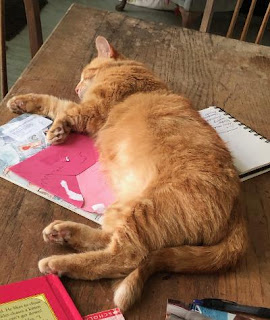 She's like a little ghost cat who is suddenly just there, occupying space that you could swear was empty. She seems to have mellowed a little bit in the past few months and hasn't drawn blood on either Mr. Moon or me. She is still strange, even for a cat. She will absolutely rub her head on us and beg to be scratched but when we try to please her by obeying her, her tail will twitch, twitch, twitch, which as all cat observers know, means irritation to say the least.
She loves to sit on the big chair with Mr. Moon where I know she feels as safe as August does when he sits there.
Oh, how I miss watching those two beloveds sitting together, watching TV, being content.

It's been a quiet day for me. I took the trash, went to the post office. I received my replacement driver's license and do not have to renew it until I am 73 years old. As Mr. Moon said, "They sure are optimistic, aren't they?"
Indeed they are.

I started pinto beans this morning and I made a loaf of sourdough which is in the oven now. I picked a grocery bag full of green beans. I did that little bit of weeding and mulching. And I saw this. 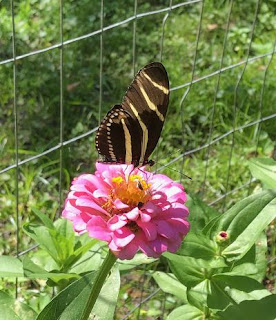 A zebra long-winged butterfly on a pink zinnia. Before I saw the butterfly, I saw its shadow on the ground where I was working. I looked up and there it was.
I suppose that's a metaphor for something.
When I was walking back to the house I stopped and looked up at the magnolia tree in our backyard. It truly is huge. 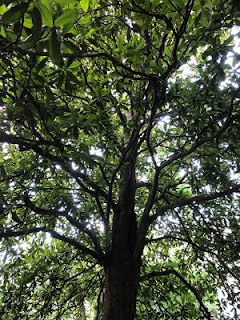 I almost said, "my" magnolia tree but it was a very long time ago that I realized that humans cannot own trees. We can plant them, we can cut them down, but we cannot own them no matter where the property line is. The ground and the sky own them. They own themselves. They have their own lives to live and if we are lucky, we can share space with some of them while we live our own lives.
That's what I think, anyway.

One of the reasons I've wanted to be quiet today is that I heard from an old high school friend that her brother had died. He, too, was my friend and was in my class. He was one of those sweet, smart boys. Not a captain on the football team, big and blustering. He did not swagger in any way. He had crazy hair and glasses and he was shy but funny and one time, when I was in the hospital almost dying, he came to visit me and brought me an aviator's cap with sheepskin wool ear flaps that buckled under the chin and I have never forgotten that because it was so beautiful for him to come and give me that gift, so unique, so sweet.
His whole family was the most grace-full family. I have spoken of them before. How the parents were what I would call "true" Christians, like Jimmy Carter. Never judging, always loving. I've spoken about how they gathered a bunch of us outcasts who had strange and what we'd now call "dysfunctional" families and told us that if any of us ever needed help in any way, to call on them and they would be there.
And they would have.
The last time I saw them was many years ago. I had dropped by their house to see if they were there and they pulled up right beside me in the driveway. As they got out of the car, the wife said, "Is that our Mary?" And they love-hugged me so.
I'll never forget that. I cry when I think about it.
And so of course their son was a good one. I keep saying "sweet" but dammit, he just was.
A few months ago his sister had gotten in touch with me to tell me that he was very ill. She sent me his e-mail address and I wrote him and he wrote me back and I answered that but I never heard from him again. His sister told me that he'd really appreciated my e-mails but he was just too sick to respond again. That he was in a lot of pain.
And now he's gone.
All day I've thought of his merry eyes, shy beneath that great mushroom-banged hairstyle of his.
Do you want to know a secret?
I wish I had kissed him in high school.
I don't think he would have minded that. I think I would be a better woman now if I had.

David Teeter. His name was David Teeter. I'm glad he's at peace but I know his family is deeply grieving. One of his sisters, the one who's been in touch with me, is a poet. Her name is Alice Teeter. She posted this today on Facebook.

Added to the family of ghosts
who gather at the table
how is it possible this sunlight
fluttering the green leaves
these birds chirping in the trees
this white cloud billowing
high into this bluest sky this
cool breeze blowing across water
will no longer know him?

And all day as I've heard the birds and seen the green leaves I've thought of him and his family.

And of course I've thought about people rioting and wondering why it's taken so long for people, descended from people owned by people who had no more qualms about saying they owned a person than a person would have qualms about saying they owned a tree, to take to the streets because they have exhausted all other recourse. I sat and watched a video that Trever Noah posted and if you have any questions at all about why this is happening right now, I suggest you watch it too. In fact, I think everyone should watch it.

There were protesters in Tallahassee today, I hear. They started at FSU, marched to the capitol, and then to the police department. Someone (a white someone, of course) drove a truck through them as they marched. Amazingly, no one was killed and police had him in handcuffs and in custody as soon as the truck was stopped by the protesters who followed it, to ensure that the driver did not get away.
The dominos have truly begun to fall.

On top of everything the virus is still very much among us and I shudder to think of the people being exposed as they gather to protest. I guess that once the dominos start to fall, there is no stopping them.

I wish I prayed because I would pray for protection for all who are fighting for an end to the horrors of a very-not post-racial America.
But I don't.
So I guess here we are. History is being written, being made as we watch.
And like they chanted during the Viet Nam war protests, The Whole World is Watching!
Only now a million times more so.

Remember to look up, even as you look around you.