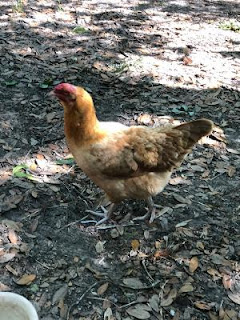 So this morning I was sitting here on the porch reading blogs when I heard something I'd heard at least a month ago which was the sound of a juvenile rooster attempting his first crows. It's a funny, gargling sound completely unlike anything else and I was mystified. None of the baby chicks were old enough to even begin to think about crowing and Liberace was definitely the only rooster on the property.
Hmmmm...
This morning when I heard it though, I knew immediately who had made it because she (yes, she) was right there in the yard beside the porch and she was only chicken not in the coop because she never sleeps in the hen house but in a tree instead.
Miss Suzie. See above. Who is definitely an egg-laying female.
Now whenever I've heard of a hen crowing I've always laughed it off as the bird in question actually being a rooster who just wasn't mature enough to show all of his roostery glories.
But.
As I watched, Suzie, who was indeed at that moment clucking in hen-talk, threw her head back, straightened up, fluffed her feathers and...crowed.
Well, the strangly juvenile version of a crow.
I called for Mr. Moon to come and witness this. She didn't do it again while he was watching but he did hear her a few minutes later.
Do I have a trans-hen?
A trans-cock?
I guess I do and if anyone ever tells you that a hen won't crow, you can tell them that it's just not true.
I will tell you that she doesn't do it if Liberace's out of the coop though. She's not stupid.

And that's my chicken story for the day although here's a picture of Mr. Fancy Pants (aka, Precious) and tiny Tweetie Bird. 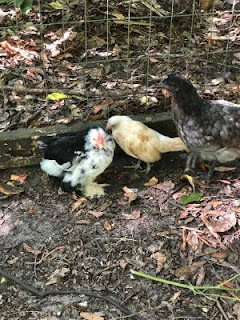 I swear, she looks far more like a canary than she does a chicken.

After we let the chickens out this morning and fed and watered them, Mr. Moon and I went out to the garden where we picked even more squash and I took a picture of one of the rattlesnake bean's bloom. 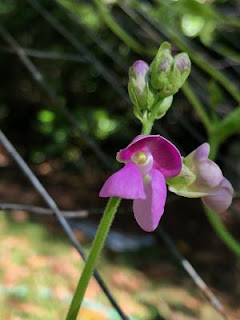 Isn't that a sweet little thing? It's not as large as my pinkie fingernail. Beans coming soon!

I walked down to the post office and collected all the mail that's been accumulating and the nightgown I'd ordered a few weeks ago from the Vermont Country catalog had come in. I brought it home and washed it along with my old one. Here they are hanging on the line. 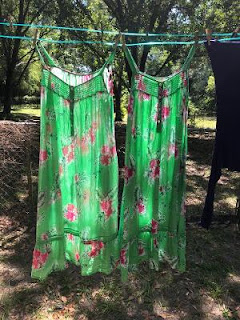 Yes! I am so boring that I bought the same exact nightgown on purpose! If you look closely at the one on the left you'll see that the fabric has worn so thin on the strap that it's torn away. But guess what? This isn't the second nightgown just like those I've ordered. It's the THIRD!
Honey, I find something I like and I stick with it.
I wear 'em out and buy a new one. I'm pretty sure this won't work with husbands, however.

Mr. Moon has been working on the duplex that Hank and Rachel are soon to move into all day long. Well, since he left the house a little before noon, anyway. He is going to be tired when he gets home. I think he's been laying flooring but I'm not sure. He is a hard-workin' man. And such a good daddy. And husband too. No doubt about it.

I went through my recipe file today and found my recipe for squash soup. 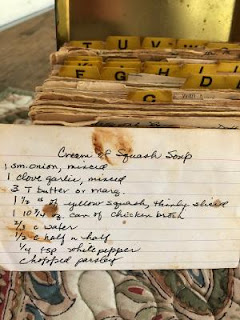 Which was requested by my good husband. I know I used to change it around somehow but I can't remember. Did I add nutritional yeast? Sherry? I must have put nutmeg in it. I should have written those things down but I did not. All I know is that it was so good that people who don't like squash asked for more.
I've also got a quiche in the oven with some thawed out Easter ham and garden kale in it. Also a few onions I grew. And of course made with eggs that our darlings laid. Probably even some from my transroo.

I cleaned out the hen house today and put the poopy hay on the hydrangeas now that I've got them weeded. I did a little more weeding out there and have noticed that my Confederate Rose is already starting to bloom which is really, really weird. They never bloom until late summer, around August or even later. And it's been a cool spring, too. So I don't have any idea what's going on there.
Crowing hens, early blooming trees.
Is it the end times?

Oh god. It might be. If we get a plague of locusts now I'm not going to be that surprised. Here's a meme that Lis sent me this morning. 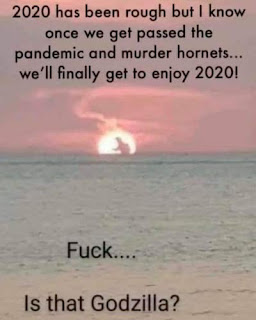 And Little Richard has died.
Hank posted the best thing on Facebook about him of all the posts on Facebook. He used these two pictures. 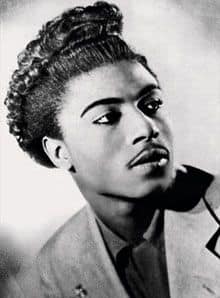 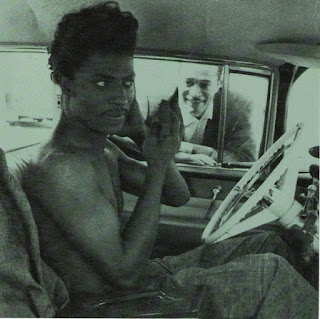 And what he wrote was this.

"As a child, they called him War Hawk for his singing voice. At 10 he became a faith healer, before joining the circus to perform as "drag baby" Princess Lavonne. He entertained in brothels and gay bathhouses and his first hit - Tutti Frutti - was one he wrote about greasing up some good booty. Women threw their panties at him on stage and his mixed race, mixed gender hotel room orgies have become the stuff of legend. They say he had a threesome with Buddy Holly. When he played, white kids threw themselves off the balconies to get down into the dancing, shouting, black crowd in the segregated floor seats. At 25, he quit secular music to become a preacher, and when he came back to rock The Beatles opened for his return tour. All before 1965. Elvis? Elvis was a talented puppet, a cover artist, an acceptable rebel. Little Richard Penniman fucked gospel and r&b and blues and honky tonk and gave birth to rock'n'roll.
Rest in power, Queen of Rock and Roll."
Hank always has the best words. These reminded me of when a friend of mine posted on a Facebook thing about Pat Boone, "Your version of Tutti-Frutti fucking sucked," which was one of my favorite FB comments of all times.
And that's about it. It's been a good day, overall. I've not done much and I haven't wanted to. I've just rolled with it. I did forget to mention that I found a very large and very dead rat right where I've been doing all the weeding. I'm pretty sure that my familiar, Maurice (or Scratch as Maggie calls her) left it there for me. She's been hanging out with me while I've been on my knees in the dirt. 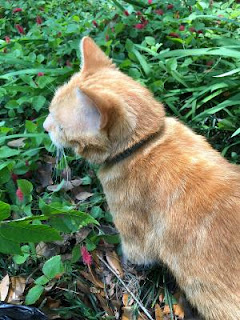 She probably thinks I've been worshipping her and wanted to reward her good and faithful servant. It's a theory.
The quiche is about ready and I'll start the soup soon. Mr. Moon still isn't home but I am definitely trying to get his supper on earlier and mostly succeeding. I wasn't so good at it on martini night but the supper itself was very good.
Oh wait! Here it is! 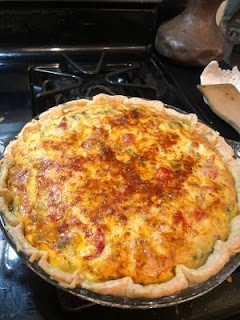