And Then There Was Squash 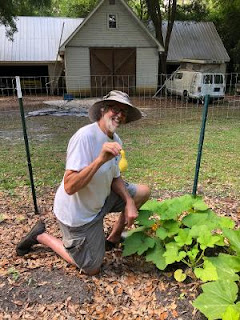 Another day, another walk, another line of clothes, another floor-sweeping, another nap, another article in the New Yorker. At this rate I'll catch up on all of them by the time I'm dead.
The article I read today was about Dr. Fauci and I'm glad I read it. I had heard some of what had gone on in his career when he was head of AIDS research but I didn't know that he had actually listened to the demands of AIDS activists about changing the drug-testing protocols when so many people were dying and suffering. It seems to me that not only is he obviously gifted at research and medicine, he is also a compassionate and empathetic human being who is able to learn from those around him, to have an open mind, to stay removed from the politics of a situation when that is what's called for. And that he's not afraid to speak truth to power.
Which he obviously has to do these days.

A friend of mine posted on Facebook that he took his dog to a beach near his condo in Panama City (Florida) and there were so many people there not wearing masks, toting beach gear, cramming up together that he got back in his car and drove off. He saw cars from all over, many of them not from Florida.
My god but people are stupid. The paper posted pictures from Tallahassee of places opening up again, couples sitting at tables with no masks (because you can eat when you're wearing a mask!) with servers standing right there beside them, taking orders. Florida is as ridiculous as the press makes us out to be and that's all there is to it.
I guess we'll be a big old experiment to see what happens when you go back into the burning building because there's enough fire trucks to keep the flames under control.
Is it really that important to go to a favorite restaurant or to buy a new dress? Oh! Don't worry! After someone tries on a garment they steam it before putting it back out on the rack!
Well.

So we picked our first squash today. Those things can almost double in size overnight. I swear. Here's two that we picked. 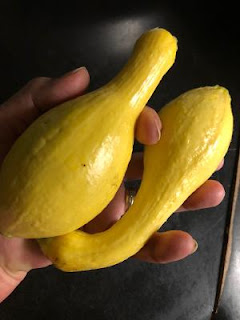 I'm going to make a small squash casserole tonight along with some sweet potatoes and pork chops, some collards and kale from the garden. Mr. Moon has been working so hard and we are going to enjoy the results of his labors so much.

In some sort of miracle it's supposed to get cool again this week. I can't remember ever having weather this mild in May. I know it won't last but while it does, I am going to revel in it. This morning's walk was hard, the day already hot and humid by the time I got out there but nothing like it's going to be by the end of the month, I'm sure.

That's about all I have to say this evening. I've been a little low today but I plan on picking myself up by my big girl panties and moving on beyond that tomorrow. Not sure how but dadgummit! It must be done! There is no excuse for me to wallow in misery when I am surrounded by such beauty, such bounty, such love.
That's what I'm telling myself tonight.
And I am going to try.

Let's all remember that this virus is no joke, that no matter what presidents and governors may say, the danger is far from over. And that's not the paranoid ranting of a libtard, either. It's the damn scientific truth. When your state won't even release the true numbers of infections or death but says it's safe to go out you have to suspect that perhaps it really isn't.