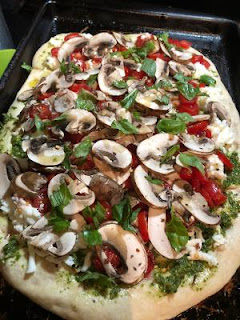 All right. I have to tell you that that focaccia/pizza rustica/whatever you want to call it, was one of the best things I ever made. After it was baked I dressed all of those tiny arugula leaves that I patiently stripped from a plant many people would have pulled up long ago with a tiny bit of olive oil and balsamic, salt and pepper and we ate that on top of the pie-without-a-name and had bowls of squash soup and it was pretty much heavenly.
Do I miss going out to eat with my kids and grandkids?
Yes. Of course. Because of the social aspect, because it's fun to see everyone. But not for the food. I'll tell you the truth- I don't think I brag about much. I admit that my housekeeping skills are a bit of a joke, that my husband is obviously a much better gardener than I am, that as a chicken-tender I could definitely keep things cleaner for the birds, as a seamstress I'm subpar. But when it comes to cooking, I can do it.
And last night I really did it.

I may have discussed this before (what? twenty, thirty times?) but sexing young chickens is a fool's errand. I'm not about to stick my finger up anything so I just judge on looks and I don't claim to be an expert but this morning I got a picture of a youngster that I'm fairly certain is going to crow eventually. 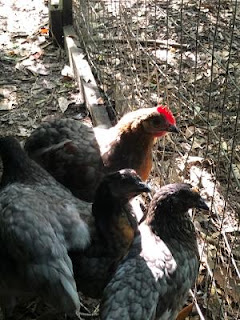 I love the way the sun is shining through his little comb and wattle. He's a very handsome guy.
I think.
Combs and wattles do vary as to size and even presence according to breed and I don't know enough about chicken breeds to testify to anything but I do believe he's a man bird.

So this morning I was in a horrible, down mood. Tears spilled without prompt. I'd had so many ridiculous and disturbing dreams and they were hard to shake and I just did not feel good. Jessie and Lauren were planning on taking all the kids blueberry picking at a local farm and had invited me and I really thought I wouldn't go. It was already so hot and humid and honestly, berry picking in Florida is a special sort of hell. But after I got the sheets on the line and the chickens all taken care of I decided that I'd join them. Lily was at work but sweet Lauren, being a trouper, agreed to take that brood. I met them at the farm after a beautiful drive a few miles north of here. Everything is so very green right now and the road the farm is on is a canopy road with giant oaks bending towards each other over it. I'd never been to this place before and it's pretty cool. They've moved three old farmhouses out to the property that I would gladly live in. They are fairly primitive but beautiful in their unpainted, chinked log walls. I have no idea if they do anything with those tin-roofed, graciously-porched old beauties but I'd live in one.

I met up with my sweeties and it was hot. Hot AND humid. But we started out cheerfully enough. The bushes are in full sun, of course, and I'd forgotten my hat and the bushes were absolutely NOT filled with berries. We found some as big as marbles, but they were few and far between. Even the little ones were sparse. We trudged from field to field, from row to row and thankfully, before I admitted defeat, Maggie and Gibson and Levon put their little feet down and said, "That's enough. 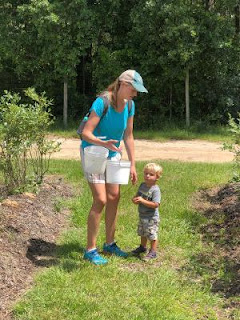 The little man was just exhausted. 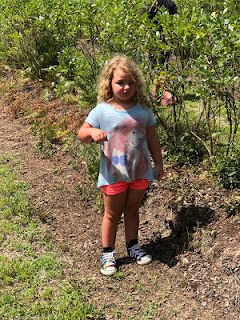 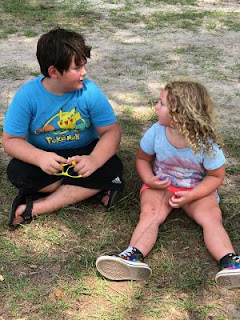 Resting in the shade.

We probably didn't pick for half an hour and between all of us, I doubt we got a pound of berries. But it was fun, talking to August and Owen as we walked between the rows. August wants to be as big and as cool as Cousin Owen so bad. He wants to impress him. And Owen is sweet with him. We were talking about what time we get up in the morning and Owen said, "I sleep until ten o'clock!"
I said, "I'm pretty lazy. I sleep until about 8:30."
And August said, "I sleep until 31."
"Wow!" I said. And Owen didn't point out that thirty-one is not a time and he calls August "dude" which makes August feel like a man, and it's something that I love to witness.
On our walk back to the parking lot, Levon and Maggie had a long conversation and it was precious to see and hear them just talking away. Such sweeties.

But we didn't walk back to the cars empty-handed. Turns out that you can buy pre-picked berries for the same price as the ones you pick which is truly ridiculous. People are paying for the privilege of sweating their asses off and I get that it's a grand experience for children and people who are thrilled at the idea of harvesting something right off a living bush but really?
Yeah. I'll take three pounds. Here's fifteen dollars. Thank you very much.
They're really not that cheap but they are good.
August asked me what I was going to do with my berries and I told him I wasn't sure. I think I'm going to give Hank and Rachel some and maybe make a pie. Sounds good, right?
And speaking of Rachel- she's been accepted into the FSU Master's program for social work! We are all so proud of her. She's just amazing. That's a line of education I had considered at one time. The counselor who saved my life had an MSW and it was something that I probably could have gone on and done with my BS in nursing behind me but I never did. I don't know that I regret that but it sure makes me happy to see Rachel going for her own dream.
She's a very, very strong woman and our family is so lucky that she's part of it.

And that was my day. I also made Lily another mask and put the clean sheets on the bed and I've got a nice little chicken (not my own, of course) in the oven with stuffing and everything. I'll put some potatoes and carrots from the garden in with it along with some garlic and onions in a little while. My husband is home from working hard all day at the duplex. It's getting close to being finished. Mr. Moon posted this picture on our thread after Rachel made her announcement today: 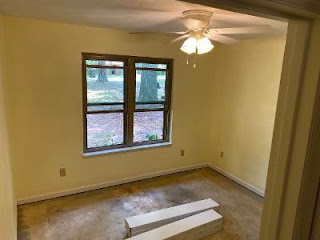 His text said, "Rachel your office and study room is ready for the floor."
Such a good daddy. Such a good man.

And so somehow during this day my mood has lightened, my spirits have risen. 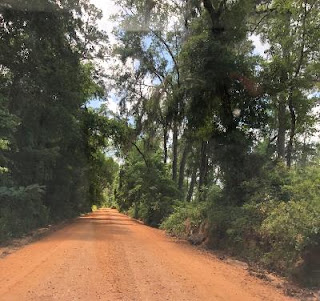 This was taken on the road I drove home on. The orange clay is so very much a part of north Florida, just as it is of southern Georgia because borders are so random and do not reflect geology but rather man-made constructs.
Not unlike time which we think we have harnessed with phones and watches and nuclear clocks while my chickens go to bed at the same time every evening although it is only the same time in their estimation which I think is probably the truest one.
Perhaps they go to bed at 31. I would not be surprised.