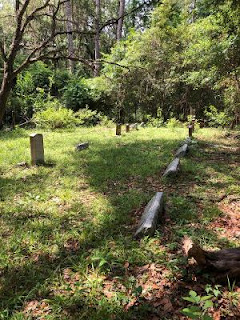 I've felt so much better today. And again- no idea why. It's not like Donald Trump isn't still alive and the president and the US is certainly not any healthier today in any way, shape or form than it was yesterday but perhaps my boat has just floated more lightly on the river of denial I seem to drift in. I remember that Kathleen used to say she carried around her own bucket of sand to stick her head in. I think of that frequently.

But I started out by going to the Post Office and sending a package to a friend and then I decided to walk my old, old route and I did. I checked on the old graveyard and it is still there, its occupants still resting peacefully in the shade under their headstones. This is a pretty old cemetery for Florida. I am always surprised that the grave markers are still readable. Some of them are over a hundred years old. 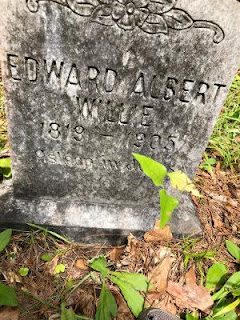 I do not know who cuts the grass and keeps things mostly in order. The most recent burial was in 2013 so it's still in use.

I walked past Mabel's house. Some of you may remember her. She's about my age or a little older and is retired and has her own house at the top of a hill in a nice little neighborhood. She has told me stories about taking care of her younger siblings, picking cotton and blackberries through hot summers to help her family, working in their garden, feeding their animals. She's had a hard life and I think she loves her little home where she lives by herself. She never married or had kids and that's the way she wanted it. She was out in her yard which is her kingdom where she knows each leaf that falls, I swear. "Hey!" we said and I took my headphones out of my ears.
"You started back to walking?" she asked me.
"Oh, I've been walking, I've just been going different routes."
She told me she'd broken her leg March a year ago and hasn't gotten back to exercising yet. She asked how my garden was and I told her that since the virus my husband has mostly taken it over and that it's beautiful. We both agreed that we like staying home and so the virus isn't affecting us as much as it does a lot of people. Before we really got into it all though, her phone rang and I said, "You take that. I'll see you soon," and she said, "Okay, good to see you," and I walked on. A few houses down, a guy was opening his gate to drive out of and said, "I see you walking all the way up in Leon County."
"Yeah, well, sometimes," I said. I told him that if I get out and walk I can be lazy for the rest of the day and feel okay about it. He laughed.
I like having the eyes of neighbor people on me. I like feeling recognized and known. It makes me feel like if I had a problem someone would stop and help me, just as I would stop and help someone if they needed it.
Isn't this how heaven would be? We don't have to love or be best friends with everyone but we can recognize them and keep an eye out and help if needed.

Speaking of which, my husband's been at our friend Tom's all day long, helping him weed his garden. Glen's that kind of friend. He just does what should be done. He knows that Tom can't get down on the ground to tend his garden the way a garden needs tending and so he planted his beans for him and now he's weeding them. He came home to get out of his wet clothes after he'd been rained on, and to eat his lunch. We went out into our garden and picked some more beans and admired the pretty roses and laughed/fussed at the chickens who were busily sticking their heads through the wire and beaking bites of bean leaves. 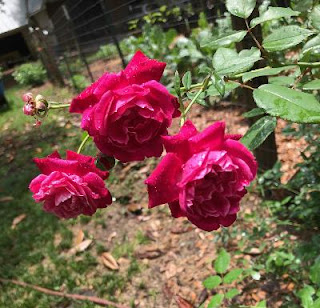 Ellen! Those are yours!

We laughed together and were easy together, the way you hope and imagine you'll be with someone you've been in love with forever and ever.

After he left to go back to Tom's I got out the canning kettle and filled it up and boiled my jars and simmered my lids and made my brine for the bean pickles. I spent well over an hour trimming beans to the correct length to fit into the jars. 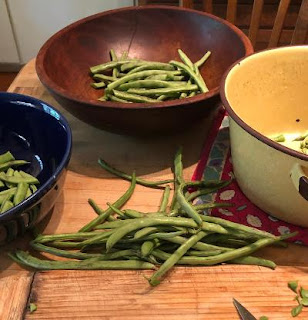 I saved the trimmed bits and bobs, thinking I'd cook them for a meal but ended up processing them too to use in salads. Why not?
Two gallons of beans filled seven pints plus the two with the snippings. I added a peeled clove of garlic to each jar after I'd filled them with beans, then dill seed, mustard seed, hot pepper and coriander seed. I put them back in the canner and probably processed them too long in the boiling water but this is all a learning experience. I think that all of my jars have sealed. The canner's delight is hearing that metallic pop. The sound of success as I always say. 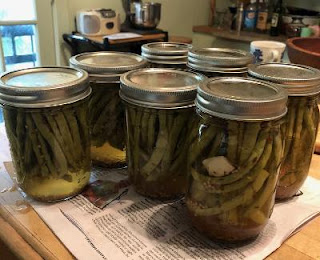 I still have enough beans left over to cook for supper.

Mr. Moon's potato digging did not give us a huge bounty but they look lovely. 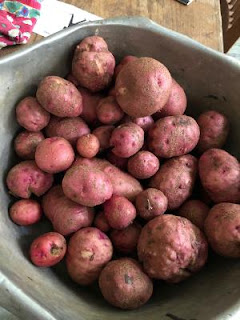 I'm going to cook some of them for supper too.

So it goes, so it goes. I got nothing to complain about. At least as long as I stay here in my own little bubble of Lloyd where there are too many of us to all know each others' names but too few to be complete assholes. We're all either related or neighbors and often both.
One of these days we'll all be in the ground and it's important to keep that perspective.

Meanwhile, I think I need to find out if the Wacissa is open for swimming and see if we can figure out a time to slip down there and dunk our sweaty bodies in the clear holy water. I'd say we could go at night when surely we'd be alone but alligators might mistake our arms and legs for something on their regular menu so, no. We won't be doing that.
There are as many ways to die as there are to live but I'd just as soon not die by alligator.
That's gotta hurt.