Carrying On And Keeping Calm. Mostly.

Well, here's some news I haven't written about- Jessie got tested for Covid last Sunday when she'd had a headache for two days and then lost her senses of taste and smell.
Ooh boy.
By Monday she was feeling so fine that she felt silly for having been tested but according to an article I read on the NPR website, those two things- the headache and the loss of taste and smell are often the only indicators of the virus in young, fit people. So. She said it was easy to get the test but because this procedure had just been put in place, it was so bombarded that she hasn't gotten her results yet and won't until next week. Hopefully she will by then because now she's supposed to quarantine herself and can't go to work and really shouldn't come out here although she was here on Saturday when the headache first arose. We were mostly all outside the entire time so I'm not worried about Boppy and me.
They're getting work done on their house involving getting rid of old insulation and putting in new so that could very easily explain the headache. Not so much with the loss of taste and smell.
Anyway, that's what's happening here in Coronavirus news.

Today's been a long day and I'm exhausted. I took a walk this morning and got the laundry on the line and then I went into town for a shopping. I went to Costco first which wasn't too bad although it was pretty crowded. Everyone was wearing a mask as you have to be wearing one to get into the store. Beef and pork purchases are limited to one per customer. I bought no beef or pork. I did get some things for Jessie and took them over to their house to drop them off.
It was about the hardest thing I've ever done not to hug those boys. 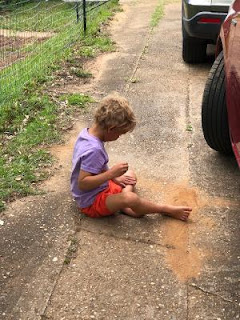 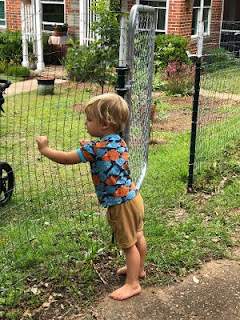 We had a bit of conversation in the driveway. Levon told me that when he's grown up, he's going to play in my car. I told him that when he's grown up he can drive my car. I said, "I'll call your house and say, 'August, Levon, I need one of you to come and drive me to the grocery store.'"
August pondered this for a moment and then he said, "You'll probably be dead by then."
"Well you could be right," I told him. "But if I'm not, I'm definitely going to need you to drive me to the store."
Oh, the honesty of a four-year old. I think he's preparing himself for the inevitable in a very wise way and I'd just as soon talk about it as not.
I told them all about fifty times that I loved them before I left and they told me that they loved me.
This part is just hard.

Then I drove to Publix where I met Lily in the parking lot and gave her a bottle of vodka that I'd bought for her at the Costco liquor store. I'd bought Jessie and Vergil a bottle of gin, too. When I checked out I told Kevin that I was a good mommy, buying my kids liquor.
It's true, too.
Lily told me a funny story which was that someone had passed some counterfeit bills at Publix and the damn thing was that they weren't wearing masks! Haha! If they had been, the security cameras wouldn't have been able to ID them. I mean, if you're going to do something illegal, it sure is the perfect time to do it in disguise. Am I right?
A lot of people were wearing masks at Publix too which was good although it would seem to me that men are a lot more apt to forego that than women. Especially men between the ages of twenty and fifty. They wear their backwards ball caps and no masks. They are obviously invincible. One woman who was probably in her fifties was in line in front of me and she wasn't wearing a mask and I heard her talking to the guy between us who was one of the backwards ball cap guys with no mask and she was saying something about "herd immunity."
Right-O!
I wanted to say, "Herd this, bitch," but of course I didn't. I also wanted to say, "Hey! I may have been exposed this week. How would you feel if I took my mask off and got into your personal space? Let's get that herd immunity thing over with!"
I noticed that she allowed the bagger to carry her groceries out for her (he was masked) and when I left the parking lot she was still standing there less than three feet away from him yakking her head off.
Who knows? Maybe he was her son.
I doubt it.

So. I'm home now and I'm not leaving for a good long time. I just want to stay home and live my little life and watch out for my chickens. Last night when Mr. Moon went to put them up there was a possum halfway into the coop and we all know what a possum can do with a chicken. I left the coop open today so that the youngest chicks could go outside if they wanted but I don't think one of them set a claw out. They are skittish little birds. That's fine. They can take their time.
Miss Pansy laid me an egg in the basket on the porch today. It was green, of course. I can't wait until the bebe's all start laying. I'm going to be so rich! And by the way, the green beans are starting to bloom so we'll be rich in eggs AND green beans soon. We're pretty wealthy in squash already. The tomatoes appear to all be under attack by every freaking fungus, bacteria, virus, and pest that nature can offer despite Mr. Moon's constant attention and vigilance.
Hopefully we'll get at least a few cherry tomatoes and maybe a few fried green ones as well. Who knows?
Not me. 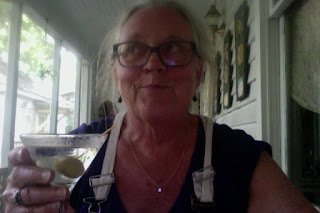