A Most Blessed Heart 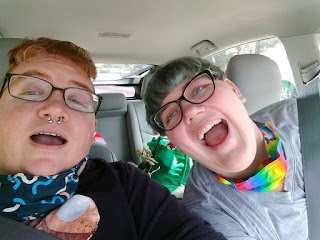 Look whose heart decided to start dancing properly again! He's so happy. I think Rachel is too. He reports that this morning about 4 a.m. it went back to normal rhythm (that is the hardest damn word for me to spell) which, as soon as he woke up, he realized. And so the cardiologist came in and said, "You can go home now," and he was outta there as soon as they got the paperwork done.
Of course he'll be following up with his primary care doc and a cardiologist.
We are all so damn relieved.
I just texted him and he's still doing well. He's spent a lot of the day napping which is no surprise. Hospitals are the worst places to get rest. And he's been through a lot, obviously. His Facebook posts have been amusing. He's been posting pictures of his meals which are fairly hysterical. Here was what he got for breakfast this morning. 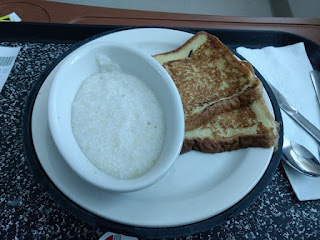 And as Liz Sparks commented, "Only in the south would grits and white bread be considered a heart-healthy meal."

I suppose that my relief freed up a bunch of my energy and I actually got a few things done today. I have been meaning to weed the garden and mulch. You know how much I love to mulch. There has been a huge pile of yard waste bags full of leaves in the corner of the garden for months and there are also about fifty bags of leaves that Mr. Moon has bagged himself. I didn't get to any of those but I did use all the leaves in the old bags in the corner. And those bags are heavy as hell. I love spreading the leaves out though. When you open the older bags they smell like brewed tea and some of them have started composting so you can actually feel the heat of that process. Not that I needed to feel any more heat today. I think it got up to about ninety. And there's still plenty of the garden I didn't get to but what I did makes me feel good. The leaves will help retain moisture in the ground and as they break down it makes the dirt more friable and enriches it. And perhaps best of all- mulch helps with weed control. 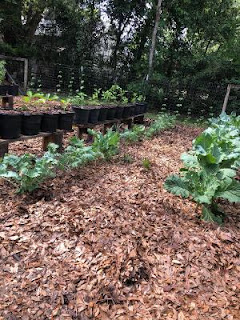 There's a small part of what I did. Mostly what you can see growing there are kale and collards which have not bolted and which are still providing us tasty salads and cooked greens. Bless their sturdy green hearts!
Mr. Moon picked the first green beans this morning, I picked a few more this afternoon. We're going to be AWASH in green beans very soon. Maybe this year I'll be diligent enough to freeze some of the bounty. And perhaps I'll make dilled green beans which are delicious.

Before I got out in the garden I started a pot of soup with white beans and garbanzos, which is sort of weird but I wanted to use up two little bits of bean packages I had hanging around. I put the beans to cook with some chicken broth, and sauteed onions and red peppers and garlic and some Easter ham. Added those to the pot with the beans and cooked them all day long with some parmesan rinds. I've only recently learned about saving and using parmesan rinds and it's a life changer, y'all. I've now added canned tomatoes and will throw in some macaroni pasta at the end. Of course there are spices in there and all that regular stuff. And I picked some of the collards and kale and cut that up thin and added it. So. Dinner in a bowl along with some sourdough bread.

AND, because I'm a crazy woman, I made the man some oatmeal, raisin, pecan, chocolate chip cookies. 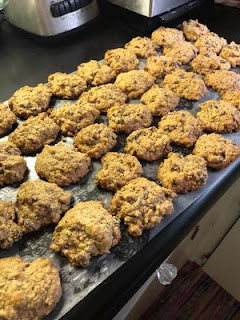 In blog news I've been battling a horrible, terrible, hideous infestation of spam. I am talking about waking up to find over eight hundred spam comments. Thankfully, Blogger has been putting them in the spam folder and not publishing them and I've figured out how to mostly deal with them in my e-mail notifications. So I'm not freaking out. The spammer changes its name frequently. The names range from Asian sounding to Latino sounding to faux-American sounding. If it doesn't stop soon I'm going to have to cut off comments for awhile because this is a pain in the ass. When I tell you that there have been THOUSANDS of spam comments, I am not kidding.
As if life wasn't presenting me with enough to worry about already. In the grand scheme of things a few thousand spam comments is not that big a deal but it is more than I care to have to mess with.

Speaking of things I need to worry about, here's a picture that sums it all right up. 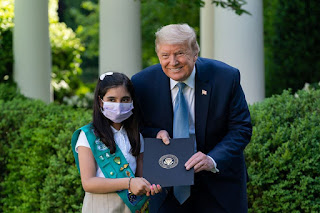 Sorry. I know. I should have given a trigger warning. But can you BELIEVE the motherfucker didn't even put on a mask to protect a child?
Yeah. Of course you can.
I don't even need to comment about the expression on his face.

There are not enough curse words in the world to describe how I feel about that man.

There are not enough sweet words in my vocabulary to describe how grateful I am that Hank is home and that his heart is beating as it should be.

We're supposed to get rain tomorrow. I so hope we do. Last night it rained just about enough to moisten the ground and it smelled like heaven.

And that's plenty for tonight.
Shall we meet again tomorrow?
I hope so.