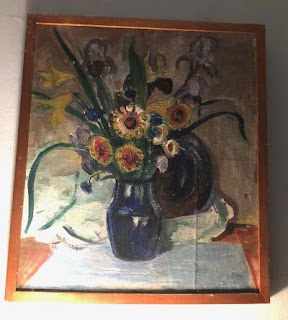 Not much to report today from here in my bubble in Lloyd. Didn't even leave the property. Hank and Rachel came out and wore their masks the entire socially-distant visit and I appreciate that. Hank, because he's been not only in the hospital but in a doctor's office is being super careful about protecting others. We talked for a long time on the back porch. There's a lot to talk about. Hank and Rachel are both upset that they can't be present at the protests. They are both strong believers in showing up to represent. But it's just too dangerous for Hank now and Rachel can't afford to bring anything home. They are as upset as any of us. They are both the kind of people who see injustice and want to do something about it. I am proud of my children. They are all that way. But perhaps because of Hank being a part of the LGBTQ community, he has always been the most finely attuned to fighting for the rights of all. I remember when he first told me he was gay and I, being afraid for him, said, "I just don't want you to get hurt. You don't have to be too vocal about it," and he said, "I couldn't hide it if I was black."
My kids are my greatest teachers.

I don't know what else there is to say today. I can't watch videos of the violence. It makes me sick. I understand it and where it comes from but I cannot watch it. I did not watch the video of George Floyd's death, either. All I had to see was the picture of that cop with his knee on George Floyd's neck with his hands in his pockets to understand it all. It's just all so crazy. It's like the LA riots and Viet Nam war protests and Selma and all of it all together at the same time combined with a global pandemic. I have seen some strange times. I have witnessed hard things. I have been present at a time when things changed so much that it almost could have been called a revolution. It WAS a revolution. I have seen good changes and bad changes. I have seen a president murdered. I have seen a president shot. I have seen police set dogs on peaceful protesters and I have seen students killed while they were protesting.
All of this via television, of course. We ate our dinner watching Vietcong getting blown to bits, American soldiers coming home in body bags.
But I swear, these may be the craziest times I've ever seen.

Perhaps in a way for my brain to distract me, this morning I woke up thinking about my Granny and Granddaddy's house in Roseland and it occurred to me in my sleepy musings, that I could remember almost every thing in that house. Not everything, but specifically every thing.
Of course I can't literally remember every item in their little cottage but I swear- I can remember so many of them. It's not that I have a great memory- I do not. It's just that they lived that simply. And they were not poor. They were in their retirement and after they died, my mother still inherited money from them, even after Granny had lived for years in a nursing home. My grandmother never worked and Granddaddy had one job his entire life and sent three kids to college but he saved. They had enough money to buy a good chunk of river-front land in Roseland and donate a part of it to have a community center built which is still there. But their own home and the homes of their friends were incredibly uncluttered and unpretentious. They just didn't keep things around that they didn't need, didn't want. Marie Kondo could have learned from them. They were, in their way, quite Zen. And so each thing in their house had purpose and meaning and I remember everything from the way the enamel cabinets and drawers in their kitchen sounded when they opened and closed to they magical way the little telephone notebook they had magically snapped open when you slid the lever down to the proper part of the alphabet. I remember Granny's hairbrush and comb on her dresser and the picture of her mother she kept there. May has that picture now. I remember the picture she had over her bed that my uncle had painted when he was a boy and which I feel sure my granddaddy made the frame for. It looks like his work, perfect and absolutely simple. I have that picture and it is in my own bedroom. I can remember Granny laying down to take her nap, her glasses with the horrible hearing aids in them laid on her bedside table, her tiny feet crossed at the ankles. She wore one of the three or four dresses that she wore daily, arranged straight as a pin on her small body as she lay on her back on top of her white bedspread, the oscillating fan on from across the room in the afternoon summer Florida heat. I remember Granddaddy's banjo clock on the wall, the rattan couch and chair in the tiny living room, the spices set on the back of the chimney bricks over the stove in the kitchen, the strange and wonderful porcelain piece on the mantel of a boy and a girl, somehow completely too fancy and out of place in this Florida cottage. I loved it.
My mind keeps going back there today, to Granny and Granddaddy's little house. It soothes me. It was the first house I was ever in that made me feel safe and yet, held mysteries and magic even in its small spaces. That porcelain statue, Granddaddy's card shuffler, the iron dog nutcracker that I would insert my finger into its mouth- the cracking part- and raise the tail which caused the mouth to clamp down to test my ability to withstand pain. The cabinet of books, one of which was a National Geographic book on early man which Granddaddy would look at with my brother and me, explaining the pictures as we turned the pages. My favorite picture was one of a group of almost naked men stabbing a mastodon to death. I could not study it endlessly, trying to suss out the agony of the animal, the determination and fear of the men.

Perhaps, like I said, I am thinking of these things as an alternative to thinking about the horrors.

I don't know.
I don't know shit.
I do know I am missing Roseland right now. Even though horrible things happened to me there the eternal beauty of the river and the trees and the plain simplicity of life and the unadorned and unspoken goodness of my grandparents somehow saved me even as it happened.

That's all I can say.