Isn't It All Really About Protecting The Vulnerable? And It Would Appear That We Are All Vulnerable

I guess I had my first real, true pandemic dream last night. It involved elements from other dreams. I was living in an apartment house in a big city and I could not find my apartment. I had no idea what number it was and to make things even more difficult, the place was so big that it took up an entire city block and there were different sections in it as well as restaurants and bars and the restaurants and bars were open and people were gathering, eating, drinking, not wearing masks, not concerned in the least about social distancing. I was worried and frightened and not so much about me but about the baby I was carrying around. A little baby girl in a pink dress and she had a wet diaper and I needed to change her and also, mostly, get her to safety.
I so often dream about babies, specifically not being able to protect one. I suppose that is my greatest fear on earth- the inability to protect a child. Even my grown-up children. When I think about Lily being at work in the grocery store or Jessie being at work in the hospital I have to just shut the thoughts down because there truly is nothing I can do to protect either one and to obsess about that fact would lead to madness.
But of course babies are the most vulnerable of all and I can remember that the first emotion I had when Hank was born was an unbelievably powerful need to protect that child. And my dream-babies represent all of my babies, the grown ones and the grandchildren, too. And in these dreams, even as I struggle in one dangerous scenario or another, there is generally a baby or a child or children that I must keep safe. I suppose this has been uppermost in my mind since Hank was born or perhaps even when my baby brothers were born and I fell so in love with them and became one of their caretakers.

The dream may have been triggered by comments left on a White House Facebook post last night by assholes who are overjoyed at being able to go out into the world. One comment especially stunned me for its overwhelming ridiculousness.
"Finally got to have a sit-down dinner at Denny's!"
Because I have an evil demon in me I replied to that comment with, "Seriously? You'd risk your life and others to eat at Denny's?"
The person replied, "I choose not to live in fear."
To which I said, "While you were making choices, seems like you could have chosen a better restaurant."

Look what I found this morning in a tomato plant. 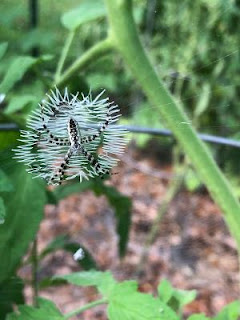 I can't recall ever seeing a spider like that in a web like that. As I watched her, she dropped down and wrapped a bug beneath her in silk and then scuttled back to spread herself out against the center of her web again. Her web reminds me of stitches patching an old shirt, of the thick place in a sock which has been darned. It reminds me of the rays emanating from the Virgin of Guadalupe in images of her. 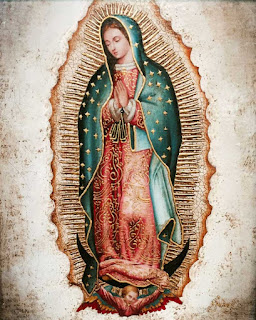 It reminds me that there is still wonder.

The final reply I left to the commenter who finally got her sit-down dinner at Denny's and who chooses not to live in fear was that it has nothing to do with fear but everything to do with having the ability and compassion to protect the ones we love, our families, our communities, from unknowingly spreading this virus. I have no idea if she replied to that. What does it matter? Obviously, there is a huge gap between those who interpret respect and caution as fear, and those who interpret going out to eat now as showing bravery.

Sometimes it seems like not one damn thing has been right since the election of 2016. I'm not saying that if Hilary Clinton had been elected that we would never have seen covid 19 but I can damn well guarantee you that we wouldn't be dealing with it the way we are, which is with ignorance and political aims and dangerous policies.
No use wasting time on now-impossible possibilities.
But we can still dream of better times to come.
Maybe. I hope so. I really do.