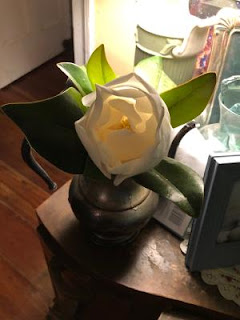 My husband actually went in to his office at the credit union today which is his physical location for business. The lobby there isn't open yet so he felt pretty safe in his office. It was quite a shock to see him this morning in an ironed shirt and neat jeans, hair combed and looking all professional. He'd probably fall over from shock if he saw me dressed in anything but overalls or a wrinkled dress. I'm really not making much effort (none) to try and look decent these days. I do shower regularly, so there is that.

I spent the day doing housewifely stuff for the most part. I did take a walk and it was as humid and horrid and unpleasant as ever but it didn't seem to lay me out as badly as the other ones I've taken lately. No idea why.

I opened a jar of green beans I pickled yesterday. It was one of the jars with the cut trimmings in it and they're pretty okay. No one's going to demand I start selling them in bulk. But they're fit to eat.

I've swept some (and honestly, I'm thinking of getting in touch with an exorcist about the amount of dust that collects in our bedroom in a week because it seems highly unnatural and I suspect demonic forces) and washed the sheets because it's Friday and one must delineate the days of the week somehow. To be honest, I've spent a lot of time online reading about the horrors that are occurring daily in our country. I am incredibly relieved that the cop who killed George Floyd has been arrested on a murder charge although the charge was third degree, and not first or second. It's never going to be enough. Here in Tallahassee a transgendered black man was gunned down by police two days ago and although the circumstances were different, if he'd been white they would somehow have managed to take him alive instead of just going at him, guns blazing.
Shot in the back.
Remember Dylan Roof?
Anyway, what can I add to the general conversation?
Not one damn thing.
If you're reading here and you're not outraged and if you don't understand why people are rioting then you're probably not in the right place.
No. You're definitely not in the right place.
I have so much to say about this that I wouldn't even know where to begin. Maybe I'll try tomorrow.
Or maybe I'll just shut my white girl mouth and do what I've been doing my whole life which is just to treat everyone with respect and kindness and to call out racism when I see it. See? Even that sounds so fucking entitled.
Well, let's not deny the fact that I am.

When Mr. Moon got home he handed me that magnolia blossom you see above. You have no idea how amazing it smells unless you are personally acquainted with the blossoms. I love the way the light shines through the thick petals. I am grateful to live in a place where these flowers abound this time of year. And even when they aren't blooming, the glossy, waxy leaves are things of beauty to behold.

He brought me a flower. I baked him a pie. 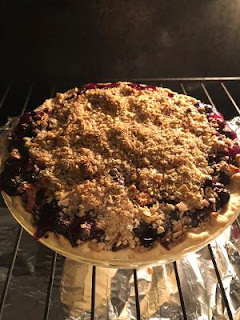 It's actually a cross between a pie and a cobbler. The topping is made of oats and almonds, sugar and butter. There are blueberries, blackberries, cherries, and apples in the filling.

And as for delineating the days of the week, we know that martinis may be involved. 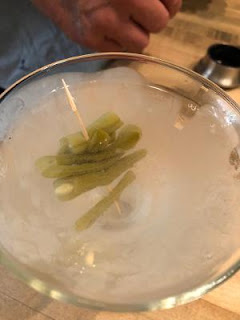 He made the martinis, I made and shish-kabobed the pickled green bean tidbits.

We work well together, Mr. Moon and I.

Happy Friday, y'all. Or, you know- whatever passes for happy these days. The bar seems to be set lower and lower but then again, our ability to appreciate that which is good increases daily.