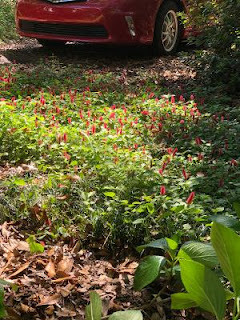 Isn't that a lovely plant?
NO! NO IT IS NOT!
That's the chenille plant that has taken over half of my yard. I finished weeding it and the monkey grass and the crocosmia from around the hydrangea bushes today. It's only taken me what? Three weeks? And by the way, there are only three of them. Maybe four. I'm too lazy to go look.
I actually put on my overalls and a long sleeved shirt and Owen's old pair of rubber cleaning gloves to go out and see what pulling poison ivy felt like and it felt like a very, very ridiculous thing to do. And because its roots are so deeply embedded and integrated into more monkey grass, I wasn't getting any of the roots so it was pointless. There is no way around it. I am going to have to use Round-Up. I mean, you can go online and search for more natural ways to deal with it but even most of them sigh and say, "Well, in the case of poison ivy..."
Unless you have a goat. I suppose I could borrow one from next door and tie her to the fence. It's a thought.

So that's what I did today. A little weed-pulling and some crosswords. I made an eggplant casserole early because I thought that Mr. Moon and I were going to take a safe trip to the coast where the boat motor repair place is to drop off the big boat which has some problem.
As boat motors almost always do.
But that's another story.
Before our little journey Mr. Moon wanted to take Lily an earth box and some tomato seedlings which he did and while he was there he helped her with a few other things and then he went and picked up a free washing machine (not stolen, I swear) and took it over to the duplex we own that Hank and Rachel are going to be moving into.
By the time all of that was accomplished it was getting late so we decided to go tomorrow because tomorrow is always free and clear these days.
I'm a little anxious about going so far from home although really, it's only a two-hour drive at the most. More like one and a half hours. I've already decided that if I have to pee (which we can count on) I'm going to use the woods (there are a lot of them on the way) rather than the germ-ridden restrooms at the Stop'n'Go or Beer'n'Bait.
I really am worried that if this is ever all over that I'll be completely and utterly agoraphobic and never want to leave my yard again.

Last night one of my best friends from nursing school texted me a whole batch of pictures from when we were all at FSU and there were even pictures from my wedding and also of right after Lily was born. 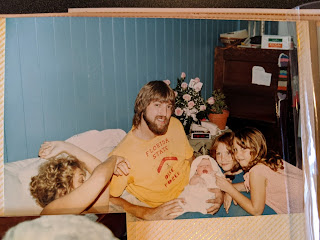 Look at us! Me with my 80's perm, Mr. Moon with no gray hair, Hank and May and that beautiful little peach of a baby, Lily Rose Moon. I looked pretty good for just having birthed a 10 pound, 2 ounce child, don't I?
Oh, gosh. That was one of the four happiest moments of my life.
And my nursing school girls were there. The pictures Vicky sent threw me right back to those days over thirty years ago. We were so close. We studied together, got trashed together, danced together, cried together, laughed together, survived together. We were there for each other through so much. Exams and bad dates and good dates and heartbreaks and hairdos. And finally graduation and the state exams. Which we all passed.
Here we all are at our pinning ceremony. 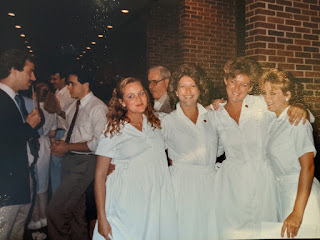 I was already well and truly pregnant with Lily, wearing a maternity nurse's uniform.
What beauties we were! How we loved each other. Mr. Moon had to court not only me but all my girls and there were more because I had some very close friends who weren't in nursing school. Not to mention my children. He must have really been taken with me because it wasn't easy.

Well, so it goes. This is life.

It isn't always easy. In fact, it rarely is.
But some of it is magnificent and those parts always involve people that we love.
Isn't that what it truly all boils down to?
Whether you're in nursing school, pain, ecstasy or pandemic, it's the people we love and who love us who get us through the darkest times and magnify the joys of the best times.

Hang in there, folks. Love fiercely.