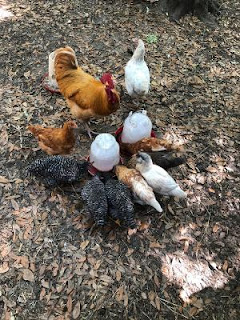 Nine of the twenty-three chickens currently residing in our yard in Lloyd. None of them were eaten by a raccoon last night nor was a raccoon killed.
He may have been scared though.

I feel so useless. I wonder if I'm depressed. Not the black dog depression but just the garden-variety-having-a-hard-time-getting-out-of-bed kind. I get up. I tend my birds. I do a little laundry. I eat some breakfast. I read shit online. I take a walk. I come home, I finish up with laundry, I eat lunch, and then I do not much of anything for the rest of the day until it's time to make supper. Everything I think of to do makes me just cringe. It's like I'm waiting for something to happen and I can't be bothered to start anything when at any moment...
What?
The sky will fall, I suppose.

At least I'm taking my walks. This morning I met another neighbor on the sidewalk.
"Do you walk everyday?" he asked me.
"Uh, just about four days a week."
"How far do you go?"
"Oh, I try to go between four and five miles a day."
"Huh. Well, I'm just walking to the post office."
"It's good for us," I said.
"It is," he nodded in agreement. We made our good-byes with the now-requisite, "Stay safe!"

I stopped and watched a little snake swim across the still tannic water of a small holding pond. He got to the edge and just rested on the border between land and water, curled so that if I had not seen him swim there, I never would have noticed him. It appeared to me that he was merely amusing himself but what do I know about snakes? Perhaps he, too, was getting in his daily exercise.
I walked back down Heartside Run. I made it to the interstate. 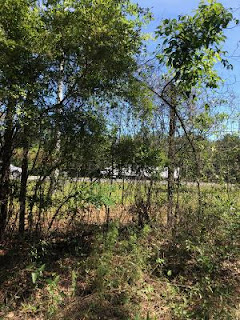 There was a house down a driveway just a few hundred yards away. I think a lot about how people travel the interstates so often bordered with woods and fields, not even realizing how many people live right past that tree line, over the hill where those cows are grazing or where watermelons are growing. Not beginning to imagine that an old woman/girl is watching them from the woods as they pass on their ways east and west.

On my way home I saw three women sitting and chatting. One was Emma, the wife of Jacob. They live across the road from the ranch that I pass where the cows and horses and at least one sheep live. There used to be nothing but an abandoned, ugly house there and woods. Scrub pine and palmettos, briar vines and blackberry bushes that I have picked in before. Since the new owners bought the property and fenced it, clearing the way for their animals and tearing down the old house and building their huge pole barn and the outbuildings and moved in RV's which I suppose they stay in while they work, I would imagine that Emma and Jacob have a lot more to watch as they sit in their front yard in plastic chairs- the kind that used to be in bowling alleys. They are so kind to me, Emma and Jacob, always waving and greeting and asking how I am.
Sometimes the tenderness of of people that I don't know but who are kind to me nonetheless makes me cry.

Later on in the day I bagged up trash and drove it down to the dump depot. The man who works there sometimes, the sweet one who always helps called out to me, "You look like a beautiful rose!"
I had to have him repeat it because I could not believe he was saying that to me in my stupid old denim short-alls that show my age-spotted legs, and my ancient Gap tank top that shows my spotted, wrinkling arms.
But he did. He was.
Because he is so kind. He said it in that way that you cannot take in any way except as a pure thing. His smile is as real and as open and as sweet as the magnolia blossom in my kitchen.

I need to start supper. I've picked greens and squash and onions. My husband has just pulled up after working another long day. The chickens are finishing up their stations of the cross for the day. I love the way they have a routine, a map for scratching, a timetable for eating, drinking, and sun and dirt-bathing as they loll and nap like movie stars by the pool.

Maybe I'm not depressed. Maybe I am just feeling too much without much to distract me from feeling.
I don't know.