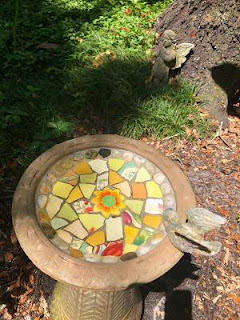 I heard a car door slam in the yard today and next thing I knew, Glen was calling me.
"Tom's here!"
Tom is our long, long-time friend whom I've known since 1975, I think, and he is one of the best finders I know. He finds cool stuff and takes it home and sometimes he brings me cool stuff that he's found. This morning he brought me that sweet, sweet bird bath. I love the tiles in the mosaic. They look Mexican to me. And the pretty little rocks around the edge and of course the bird perched on the side. Now here's the funny thing- it was only the dish part that he recently found. The base is something he found thirty years ago.
And which he has kept.
So. Can we say that every now and then it's good to hold on to things?
Right now it's in the little bed off the kitchen but I may move it to sit under the hummingbird feeder which I can look out on from the back porch. Do hummingbirds bathe in birdbaths?
I do not know but Lon told us that one day he was watering a plant with a fine mist and a hummingbird came and darted in and out of the spray for a very long time so I guess they do like the water.

It's been an easy, laid back Sunday. Neither Mr. Moon nor I did much after we showed Tom the garden and we all discussed pests and viruses which can attack our plants and how Tom has created a tool to help him pick garlic properly because he's having health problems which make it too hard for him to reach down to the ground to do it the regular way. Mr. Moon showed him the earth boxes that he is making to grow things in. I really do not understand these things but my husband is extremely enthusiastic about them. They require a lot of parts that he's having to make and a specific way to layer soil and compost and fertilizer and he keeps trying to explain it to me and I'm just like, "Uh, okay." You can buy these things online but of course my man took a look and decided that he could do it himself.
Mr. Moon did go on a bike ride while I sat right here and worked the Sunday Washington Times crossword. They are free, y'all. And I don't know if I am grateful to Lon for telling me about them or if I should curse him because I sure do spend a lot of time on them. Time that I could be learning Spanish or making quilts or...I don't know. Something other than filling in little squares with letters. I am abysmal at doing crosswords, to be honest. I suppose this makes me feel as if I have a lot of room for improvement.

After a few hours of crosswording, I put on my overalls and went out and weeded around the hydrangeas a little more. That was somewhat fulfilling. I can almost hear them sighing and relaxing their roots. And that was the extent of my physical labor for the day.

So that's about it from Lloyd, Florida. The chickens are growing. Even the bebes are getting big enough to think about letting them out of the coop although Precious and Tweety would be immediate hawk bait. Not sure how I'm going to deal with that. It would break my heart to lose one of them. We've noticed that Miss Pansy has been hanging out with the teens which is interesting because a lot of them are Americaunas or, at least what they call Easter Eggers and so is she. Can chickens recognize their own breed? She's been a bit of a loner since her sister died. I wonder if when I let Tweety and Precious out, Violet, who is also a banty, will start hanging out with them. She's definitely a loner.
Chickens. The more I know, the less I know.

I swear to you, the older I get the more I am aware of what I am unaware of. It's staggering! I mean, most of us are aware that there's a lot we don't know once we pass that stage of snotty adolescence where we're pretty sure we know everything (and to be honest- adolescents know a LOT!) but it's only as I've aged that the true reality of how ignorant I am about so many things has made itself apparent. And to add to all that I never learned, I must now confront the reality of having forgotten so much of what I used to know.

And hey! Just in time for our Sunday hymn, Youtube has once again given me the means to embed videos. So. In the spirit of all that's going on, in the holy name of Rock'n'Roll, in the eternal grace of our Lord Sir Mick of the Sacred Pelvic Thrust, I give you this.

One thing I have not forgotten is that I love the Rolling Stones.
Also- I sure used to be able to dance.
Sigh.
I'm glad that Mick still can.
That bitch.