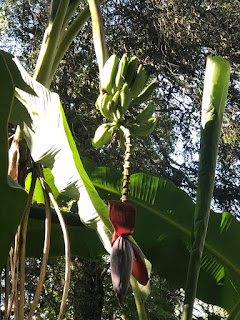 Mr. Moon and I were sort of at loose ends today. Neither one of us had anything we had to do. He went out to the garage after breakfast and worked out there for awhile and I did laundry and chores inside and then I moved on to going through some clothes to give away, throw out, whatever.
Get rid of.
Why is this so damn hard?
And then I decided to cannibalize raggedy old too-small overalls for their strap hardware to replace broken hardware on other overalls that I still wear and that project went nowhere very fast.
Mr. Moon came in, hot and sweaty and ready to be done with outside work and we decided to get sandwiches at the Hilltop and then go to the river to eat them. The river seems safe enough right now although the gulf and the lakes do not. There have been reports of people getting flesh-eating bacteria in both the ocean and in local lakes but we (probably irrationally) believe that the cold, spring fed, flowing river is free of the nasty stuff. I cannot believe I am so calmly discussing the fact that people are dying from swimming in the Gulf of Mexico but the fact is, they are. It's probably ridiculous to worry about it. The odds of getting it are probably ridiculously low but who knows?
So off to the Hilltop we went and while we waited for our chicken salad sandwiches on the old church pew we got to talking with the couple who were waiting to our right. Well, the guy did all the talking. We were discussing random things that parents say to kids like, "Don't make me stop this car," and then we moved on to how when we were kids, paddling in the schools was absolutely allowed and the man came out with the thought that children don't get spanked nearly enough these days.
To Mr. Moon's great embarrassment, I'm sure, I had to speak up.
"Well, I disagree with you. I don't think it's ever right to hit kids," I said.
And I don't. I can't say I've never spanked a child but I wish I hadn't. I'm not proud that I did it. And I'm sixty-five (almost) years old and I don't have to listen to shit like that silently. What's the guy going to do? Hit me?
So that pretty much ended that conversation.
The ladies to the left of me were looking at memes on their phones. Memes like, (and this is a direct quote), "If you wake up without a song in your heart, sing anyway," which led them to say things like, "Oh, isn't that so beautiful? I just love that!"
Of course things like this make me want to puke and I will admit that I am EXTREMELY judgmental about people who think that these trite little pieces of bullshit are profound in any way.
I'm not proud of this either but at least I didn't feel the need to give my opinion on the subject to them. Mostly because they weren't talking to me. I mean, that would have just been rude.

Finally our sandwiches were ready and we drove to the Wacissa which was beautiful but absolutely crowded with people. We sat and ate our lunch and watched the goings-on for quite awhile. It was, as usual, a pretty mixed crowd at the river. Kids and parents and old people. Beige people, people of color, tattooed people, untattooed people, fat people, thin people, lots of people. No one was blasting any music and everyone seemed to be getting along. Packs of skinny little feral boys ran about, tossing things back and forth, absolutely unconcerned about where they were going or who they might be about to run into. Grown-ups and kids lined up to jump off the rope swing, flying high over the water and then dropping into the cold water. Kayaks were paddled off and paddled in. A few airboats disturbed the peace. The cypress trees swayed in the sweet, cool breeze coming off the water.
Sunday at the river.
Finally after our sandwiches had settled somewhat (wouldn't want to get those cramps our mothers always threatened us with) we both went into the water, holding our breath and just diving in because that's the only way to do it. The water's too damn cold to ease in. Gotta just mermaid it. A little girl came up to us and said that she, too, was going to get all the way in. She held her nose between her fingers and dunked as far as she could with her swimmies on and we congratulated her when she came up for air. "I can jump really high!" she said, and she demonstrated that, too.
And then we sat in our chairs some more, just completely relaxed, in the shade of a cypress tree until eventually we dunked ourselves in the water again and sat a little longer and finally packed up our stuff and loaded up the car and came home.
It was absolutely non-earthshaking but sweet and good for everything that ailed us.

And that was it for the Moon's today. We accomplished nothing. We relaxed. We were simply...being. It was nice.
I hope your day was too.