Maggie Gets A Boat Ride...And More! 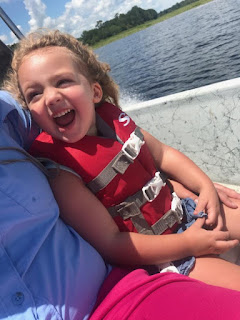 Boppy's been wanting to take this little girl fishing for awhile and her mama, who loves to fish, has been wanting to go too and today was the day. I didn't take the pictures I'm going to post. Lily did but I'm sharing them because they are so sweet and perhaps one day Maggie can look back on them and remember.

The boat they took isn't the BIG boat, but a smaller one- the one that Mr. Moon's had so much trouble with, motor-wise, but his genius mechanic finally got it running properly and it's not very large so Owen and Gibson came over here and we hung out while their mother and sister went out on the lake with the grandfather.

A problem arose when the place where Mr. Moon buys crickets for bait didn't have any and then Mr. Moon looked for worms but there were no worms to be found. There used to be a little store down where the boat ramp is on Lake Miccosukee so they loaded up sandwiches and fishing poles and went on down there, hoping for the best but the store was locked tight and so what had started out as a fishing trip became a boat ride. Which, as you can see, must have been pretty thrilling although there were obviously some peaceful moments. 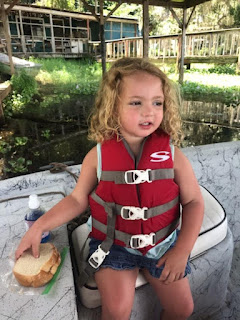 That child is just so pretty. When I gave her the dress I made her she held it to her body and said, "My dress!" as if she'd never gotten a new dress in her life. I can't wait to see it on her. Here she is with her Boppy. 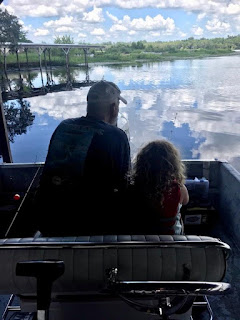 She told me, when they got back, that they couldn't get in the water because there were alligators. I am quite certain that there WERE alligators but I'll have to take Maggie's word on whether or not they actually saw any.

I was a lazy grandmother and let the boys play a Wii game they'd brought over while I caught up on reading the New Yorker. They involved me by letting me pick out which avatar they should be for each game. They're so thoughtful. We did play some cards and the matching game and I made them lunch. They'd brought Sammy over and he explored and hung out with us. Jack strolled into the house, came almost face-to-face with him and immediately planted all four feet in a spread-out position, turned into something resembling a footstool, hissed like hell, turned around and darted back out. Sammy chased him and he's lucky he didn't catch him because Jack would have torn his ass up. The poor cat has just gotten his courage back up enough to show his face and he's hanging out on the porch with me right now. I wonder if he'll ever go back in the house again. On the other hand, Sammy seemed to be quite intimidated by Liberace when he crowed and well he should be- the rooster is taller than the dog.

When the boaters got home, Maggie came into the house and announced, "I'm going to go see my boys," and went into the Glen Den where Owen and Gibson were. I just love that- my boys.
And let me report that once again, Gibson cleaned up the Glen Den. He is so proud of himself when he does this. And I pour on the praise.
I know I say this all the time but I just cherish the way each one of my grandchildren is so different and so exactly himself or herself. It's so beautiful. But one thing they all have in common is that they love to be loved and it is my pure and certain pleasure to provide that service.

And now, in other news, the Rolling Stones played in Jacksonville last night and a friend of mine went to the concert and he posted video he took on Facebook of the last encore and the Stones' bows and it blew me away. My friend was overwhelmed by how hard the old boys rocked, how unbelievable it was to watch them onstage, doing what they do best. I loved watching the clip, especially the final bows. The whole band gathered first for their bows and then everyone but Mick, Charlie, Ronnie, and Keith left and those four put their arms around each other and bowed and Charlie and Keith grabbed hands and held on for a second or two. Then they all turned and left the stage, Keith leaving last, hitting his heart with his his fist and raising his arm to the crowd before he finally made his exit.
I got shivers, watching it.
You know why they are still touring?
Because they can.
And because they're still doing what they love and they can still bring that to so many people.
As Keith said recently in an interview, they'll probably keep going on until one of them keels over. As my friend said on Facebook, he saw them on their first US tour and was not going to pass up the opportunity to see them on what might be their last- although "with these guys, who can say that?"
Amen.