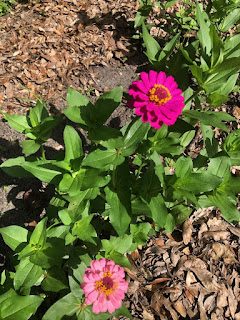 In the mornings I go out and open the door to the hen house and the chickens all come spilling out. They have a nice coop they can access from the hen house where there's water and food and there's really more room in the coop than many chickens have to stay in all day but I love to see my hens and the rooster make their way around the yard every day. They are birds of habit and routine and would be incensed if I did not let them out to roam and scratch and take their dirt baths. Liberace crows until I make my appearance. They hang around for a few minutes to eat the scratch I throw for them outside the coop before they begin their daily explorations. Every single morning when I throw that feed to them I think of the mom on Lassie and how she used to throw scratch for her chickens on that show. Her chickens were in black and white but mine come in colors as do the zinnias which are starting to bloom.
After I finish with the chickens I go to the garden to see what's going on there, perhaps to pick a handful of beans or tomatoes and I also generally check the nests to see if the hens have laid any eggs early. Today I found seven eggs in my early search which is unusual but maybe I missed some from yesterday.
It's a good way to start the day, this little time outside, before the heat gets to the broiling point. The light is generally so lovely and the spiders' webs catch that light and it is apparent why they are  known as Golden Orb Weavers as their webs do shine with a golden hue. I have one right beside the porch and I almost feel as if she is my familiar by now as I have watched her grow from a small little mama to a much larger girl, seen her web increase in size and in complexity, have watched her carefully handle and eat her victims. She is a tidy web keeper and I hope she is able to live there all summer, or at least as long as she is alive.

So yesterday when Mr. Moon got back from the river with the boys, Lily came to pick them up and she had with her...a dog.
Her children have been begging and pleading for a dog for a long time now and Lily, whose mother's heart is huge has wanted one too. She and Maggie go to the shelter just for fun sometimes although she hasn't told Maggie that you can actually take home a dog from the shelter. She thinks you just go there to look at all the doggies and that's been for the best, most likely. But a co-worker of Lily's had a little dog whom he had fostered who was older, ten years, and he couldn't keep him anymore because according to their apartment neighbors, the little guy barked a lot. And so Lily has him now for a trial period but I have a feeling that the trial was over the second the children saw him.
His name is Sammy.
Owen brought him into the house and the dog was perfectly charming. He just walked about as if interested in what he might see and smell, calmly and cheerfully. Not anxious or wiggly, just dignified and curious. He made friends with Mr. Moon who assured him that he could come and visit us.
Hoo-boy. I guess I have a new granddog.
Supposedly he is very good about not peeing or pooping in the house and although Lily had not really thought she wanted an older dog, he may end up being perfect for their family. Here's a picture she sent this morning. 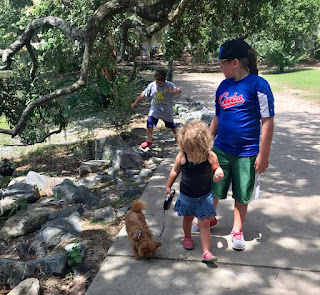 A dog that Maggie can walk! With big brother right beside her to step in if a problem arises. I can only imagine that she is over the moon- her own real baby to take care of! 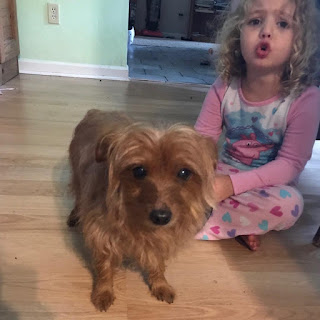 Of course the newness will wear off eventually but for now, those are three enchanted children. When they left yesterday Owen was asking if they could please give him a bath. He is a little goobery looking but he reminds me somewhat of the best dog we ever had who was named Queenie and like Sammy, Queenie was part Yorkie but not the annoying part. Lily and Jessie and I spent some time this morning reminiscing about Queenie via text and what a fine and funny little dog she was. Honestly, I still miss that dog and that's saying a lot.

And that is that story and it's been an okay day. Really better in a lot of ways but I was most gentle with myself and really didn't do much although I stayed busy. I started another dress for Maggie but I really wasn't feeling it and when I made a mistake and it was time to get the seam ripper out I just put it all down and turned off the sewing machine light and took a nap. I find that I'm exhausted which is normal and I am not going to fight it.

I am very, very excited because tomorrow Steve Reed is coming to visit! He has visited Lloyd before, years ago, and in a delightful circumstance of synchronicity we were able to see him in Cozumel a few years back. He was on a cruise that docked there while we were staying on the island and we had a beautiful day with him. Owen still talks about Steve Reed from when he visited Lloyd before. I am not sure why Steve made such an impression on him but he did. Owen was just a little guy then but he remembers and he's so excited too. Gibson, upon hearing that Steve lives in London was almost beside himself. He wants to talk to Steve about London and Big Ben and also, his job.
What a kid.
Steve is traveling from Jacksonville to Tampa and I am so glad that he's taking the time to stop by Lloyd. We plan on going to lunch and Lily and her children and Hank will be there and then Steve and I might go to the Bad Girls Get Saved By Jesus Thrift Store. We were going to go to Japanica! for lunch but it would appear that they've been having health code violations so we're going to go to Tan's, the Asian "fusion" buffet that we love so much. I think he will like it. And it's funny- I don't feel the least bit anxious about Steve coming to visit. From the first second I met him he just felt like family.
The good kind of family.
Not that other kind...
He's not going to believe how grown-up Owen and Gibson are and of course he's never even met Maggie because she was but a gleam in her father's eye the last time he was here. So this is going to be very cool. And it will get me out of the house, out of Lloyd, and into the world a bit in a very enjoyable way.
And I am grateful for that because that is exactly what I need.