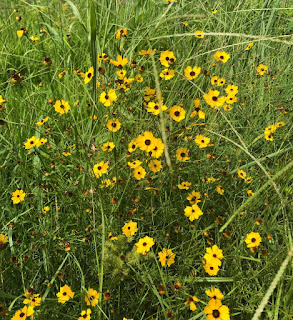 Today has been a better day. I mean- how could it not be? Trump actually cited how the Revolutionary War heroes took control of the airports in his speech yesterday! Sometimes you just have to laugh. If he wasn't such a danger to us and to the planet, he'd be nothing more than a figure of ridiculousness but of course along with his knows-no-depths ignorance there is also his cruelty and narcissism.
And yeah, the whole power thing.
BUT, we survived the 4th and it was sort of like dragging ass through a birthday that one is not so happy about or any other holiday that is given such importance when really, it's just a day and we can choose to celebrate or not, stay in bed or not, ignore or not.
It was hard to ignore the sonic booms of the fireworks (definitely not legal in Florida) that a neighbor set off for about an hour last night. I mean really. How RUDE! It reminded me of the guy at the river with his music refusing to believe that everyone there wasn't just delighted to hear Toby Keith sing about whatever Toby Keith sings about.
Shit-kickin', I guess.
But I got up today and went for my walk and once again did not die which is always a good beginning to a day. I washed sheets and hung them on the line and did another load of clothes and hung them on the line and finally around two I got out of the house and went to town where I did a much-needed shopping. I've been living out of the garden and the freezer for awhile and that is wonderful and there's nothing at all wrong with it but sadly I do not grow wheat or sugar or coffee or sesame oil or, well, a whole bunch of stuff that cooks need. So I went to Publix and did a huge shopping, zipping through my carefully constructed list and then I went to Costco and got a few things there that I needed. I ran by Lily's on my way home to deliver a few things and also to pick up a couch cushion cover whose zipper had come unsewn in the wash and I think I can fix it easily. I got to kiss my babies and asked Gibson and Maggie where their grandfather's flashlight might possibly be. It's been lost since they were here playing with it.
"Hey, y'all," I said to them. "Do you remember when you were at my house and playing find each other with Boppy's flashlight? Do you have any idea where it might be now? We can't find it."
Gibson looked at me and said, "I think Maggie had it last," which is exactly what I knew he'd say, having been a child once myself. And then he said, "And that game we were playing is called Hide and Seek."
Oh, to be educated by a seven-year old.
Maggie had no idea where the flashlight might be and I suppose it will appear at some point.

Came home and unloaded bags and bags of groceries and put everything away and had my afternoon espresso shot on ice and brought in the clothes and sheets and made up the bed and now Mr. Moon has just pulled into the yard after fishing all day.
I do not know how he does it. He gets up at four o'clock, drives to the coast, fishes all day long which is a physically demanding thing to do on a boat on the Gulf, helps clean the boat and the fish and then drives home. But he loves it. He loves it and he is still able to do it and until the day he can't anymore I will cheerfully encourage him to be out on that water. My husband is of Norwegian and Swedish descent and I have long recognized the Viking in him when he is on the water. It's where he feels most comfortable. It's where he's happiest.
Well, except for maybe in the woods in a deer stand watching the animals come and go, the sun rise, and the backs of his eyelids.
I've said it before and I'll say it again- it was certainly never in my plans to marry a HUNTER but I fell in love with one and there you go.
Of course my first real, true crush was Johnny Weissmuller's Tarzan and I suppose I've been carrying around that image of Tarzan bringing Jane home an ostrich egg for her to cook my entire life. I'm just a girl who likes a man who can bring home the breakfast. Literally.
And of course wrassle alligators and protect his woman from lions and bad men and speak fluent Elephant. Or at least the modern-day equivalent.

Okay. I have a question to ask. Have any of y'all ordered anything from one of those companies advertised on Facebook that sell dresses? Maybe you don't get those ads but I do. And I don't recognize any of the names and I feel certain they're all Chinese but the dresses look so pretty. 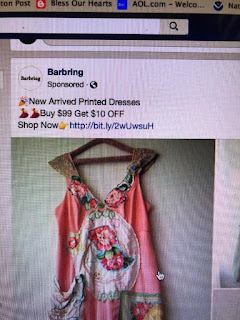 And they're cheap.
So cheap that I am doubtful about the quality of them, to say the least. Are these companies that have just cut out the middleman of American business and sell directly from their factories? I don't know. Do I dare trust my credit card information with these people? Will I go to hell if I do business with them?
So- any of you know anything about them?
I can't seem to find much online which is probably not a good sign.

It's still hot here. Brutally so. Not as bad as yesterday, I think, perhaps by a few degrees. Again, it's thundering to the east of us but the radar makes it look like we might get skipped entirely, only teased by the false promise of relief.

In chicken news I saw some of the young birds playing at cockfighting today.
I am not kidding you. And to tell you the truth, they didn't look like they were really playing at all. More like practicing.
Dammit! Here we go into rooster overload again.

I read a beautiful review of Wednesday night's Rolling Stones concert in Washington DC in the Washington Post and I'd link it but I've already read all of my free articles this month and they won't let me see it again, the bastards.
Okay. I'm cheap. They're not really bastards.
It was about how the Stones aren't just resting on their old laurels or phoning it in on this tour. They are a band, playing as well or better than they've ever played. As if they were playing for their lives. Dammit, I wish I could quote some of it.

I better go make supper for that tired, tired man.