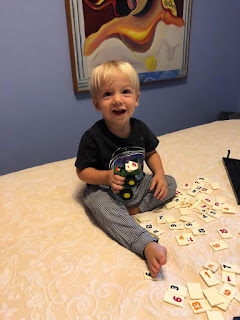 I've stayed at a few Airbnb places now and out of that small sampling I've made some observations. I shared one of these with Jessie today.
"Seems like a lot of these places have a definite hippie air to them," I said. As you know me, you know that this is not necessarily a negative statement. This pretty little cabin is no exception. There are some crystals and there are aromatherapy oils in the medicine chest and so forth.
Jessie thought a second and said, "Well, you have stayed at the places you chose."
BadaDUM!
Of course. I laughed. She's right!
Another thing I've noticed (and I feel that this may be more universal) is that the "artwork" in them is, um, well...pretty random. Like maybe paintings that friends gave them. Or possibly vaguely interesting things acquired at garage sales.
But you know- art.
So in the picture above you see Levon sitting on our bed in front of one of the original paintings here playing with his front-end loader and the tiles of a Rummikube game. We had a good time with those and also with the tiles of a Scrabble game. This all happened while Jessie took a few hours to herself to do some things she needed to do. 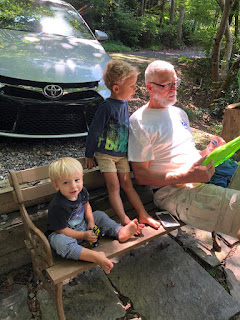 We spent a little time outside, too. The boys played with rocks because that's fun. And then Boppy did some drawing for August. Boppy does the best drawings. Especially of tractors. 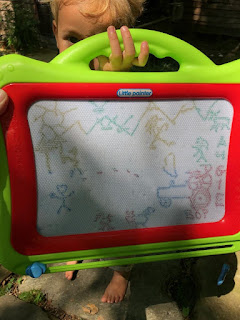 Can you see me climbing a mountain?
Mr. Moon has quite the imagination.

When Jessie got back we all went to lunch at a Thai restaurant and then we went to an amazing hardware store that also sold toys and Levon went insane over a little tractor toy and so the grandparents bought that and also a toy for August which is a sock-monkey sort of thing which shoots foam balls out of its mouth when you push in his stomach.
Hours of fun.
Hours!

August is spending the night with us here at the cabin tonight. Boppy's gone to go pick up pizza. It's been raining and it's so nice and cool. Black Mountain is a beautiful place in all ways. The town, the mountain, the vibe.
(Speaking of hippies.)

Oh! Jessie and Vergil have just moved into a little cabin near their property which is within the confines of a YMCA camp.
Long story involving family history. BUT here's the sign posted on their refrigerator. 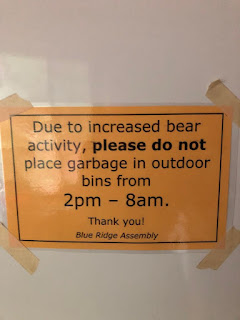 This is no joke. Jessie says that every time she's been to their property except for twice, she's seen bears. Her sister-in-law was in her kitchen, heard something and turned around to see a cub in the entrance of her house.
Don't worry. There's plenty of apples for the bears to eat. They're happy. And Vergil's mom has a flare gun she uses to scare them off.

I am mighty glad to be here. And I really want to see a bear before we leave. Not that we don't have them in Florida. We certainly do. I just haven't seen one in Lloyd. And perhaps these local Black Mountain bears, fattened on Vergil's family's apples are fatter and jollier than our North Florida bears.
I can do without seeing any of the copperheads that they've seen though.