My Garden Is Happy

It's rained all day but instead of that pleasing and soothing me, it's made me blue and agitated. I was fine for awhile. I made up a pot of the New York Times black bean soup recipe that I love so and they've been simmering all day and I sewed the zipper back in Lily's couch cushion but then I had to drive to town and I hate driving in the rain. It used to be that it only really bothered me at night but now it appears that I'm wussified during the day as well.
The first real experience I ever had with anxiety happened while driving at night in the rain. The details are unimportant but I was following a friend who was driving like a bat out of hell, passing semi's left and right on the interstate and there was a blinding rain and I suddenly realized that truly, I was going to pass out. This was pre-cellphone so I couldn't call him and say, "Listen, I have to pull over," but I did have to pull over.
He managed to realize I wasn't following him and exited and came back and found me but it was a horrible, terrifying experience and that was the beginning of my relationship with anxiety- a relationship that has shaped my life and not in a good way.
I get chills just thinking about it.

I didn't really get crazy anxious today. I was driving on roads I could probably drive with my eyes shut and it wasn't raining so hard that I couldn't see but still, I felt a little on the whack side.
If you know what I mean.

My errand involved a plant nursery and if you've ever shopped at a plant nursery in the rain, you know it's not ideal. I did find an umbrella in my car and considered myself lucky. I made my purchase and drove back home but it wasn't much fun and I laid down and slept for awhile to recover but that didn't work entirely well and now I'm wondering if maybe I'm getting what Lily has which is some sort of upper respiratory thing and looks and sounds horrible. I just don't feel right.

But. Tomorrow we are traveling to St. Augustine, one of my favorite cities in the world, to celebrate the fortieth anniversary of Lon and Lis who, coincidentally are two of my favorite people in the world. So I can't be sick because forty years is truly something and the way I love those two people is truly something and plans have been made and that is that. It's just going to be a quick trip. Over tomorrow, come back on Monday. The celebration is going to be held at a restaurant where Lon and Lis have had a regular Sunday evening gig forever. They'll play one set and then friends will take over the stage and folks will gather and dine and toast the beautiful couple.
Sounds lovely, doesn't it?
And it's all outside on the Matanzas River which makes it even better.
I got us a room via Airbnb in a restored "vintage" motel which makes me laugh. It'll be fun. I know it will be. I always have a good time in St. Aug. When the Williamsons lived there in a gorgeous old house that they'd restored, I used to visit them a LOT.
Oh, the fun we had! I look back on those days and can hardly believe that I was the same person.
I guess that actually and in reality, I'm not.
For example- Lis and I used to love to shop. Can you believe that? Of course St. Augustine is filled with great places to shop from the outlet mall to the oldest family-owned places and we enjoyed them all. I remember one place we used to love to treasure hunt in which was owned by a Cuban lady who made all the clothes in her little hole-in-the-wall place and she used the most gorgeous fabrics. Silk velvet, especially. I still have a skirt I bought from her. She loved and adored Lis.
Of course, everyone did.
And everyone still does.
There are going to be a LOT of people at that restaurant tomorrow night.

So. We'll be heading off to an adventure. Our next trip will be to North Carolina to see the Weatherfords. I talked to Jessie today and asked her if August still remembers my name. She assured me that he does. Here's a picture she took yesterday and sent to me. 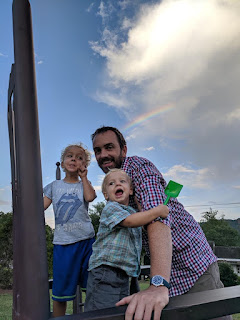 See the rainbow?
Levon still has his fa-fa and I find that so sweetly heart-tugging. Any kid can have a security blanket or a stuffed animal that they tote around but Levon Cobb Weatherford has security shovels.
He's the son of an engineer daddy.

I just went and tasted the black beans.
Oh. My. God.
So, so good.
I guess I better go make something to go with them. I'm tempted to make a pan of cornbread and call it done but I suppose a vegetable or two would not be a bad idea.
Whatever.

If I don't post tomorrow it's because I'm having too much fun.
That's the plan, anyway.
So don't worry. I'll still be alive.