Tell Us, Mary. Tell Us How You Really Feel 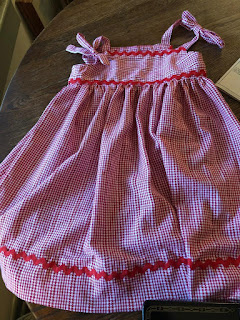 Today was sort of a one-step-back day and I knew I wasn't going anywhere. Not to Tallahassee, not to the river, not to Monticello, not even to the post office. It was a day to stay at home and continue to breathe, which I did.
So I did my pitiful amount of morning chores and then sat down to work on finishing up Maggie's newest dress and I think she will like it. I hope so. I told her yesterday that I was making her another dress and she asked what it had on it. She was wearing the dress made of the mermaid fabric I'd made her.
"It's just red and white," I told her.
"Oh," she said. "I'll be excited."
I love the way she can sound so sure of something. She's already wondering about losing her teeth. I'm not sure where she heard about that but she told me that she's going to lose her teeth.
"Yes," I said, "You will. When you start school, you will start to lose your teeth."
"At the dentist?" she asked.
"No. They'll just get loose and you'll be able to pull them out and then you'll get new ones."
"Yes," she said with certainty. And then, "Tonight." As if there was no question about it.
Hmmm...
Well.

So I made the dress and covered up any messiness with cheerful red rick-rack. In my opinion, there is not nearly enough rick-rack in the world today. Just the words rick-rack are fun.

Lily texted me some short little videos of the kids playing with air toys at the mall. There's a big playground thing, I guess, and she told me it's where the Gap used to be.
I was dumbfounded.
"The Gap is gone?!" I asked her. "It was there the last time I was there."
"It's been gone for quite awhile."
Damn. For some reason this upsets me. Where is one supposed to get tank tops? And don't tell me Old Navy. They're not as good.
I guess I don't go to the mall very often.

And so yes, I made the dress and then I took on the chore of tidying up the dresser I use as a sewing cabinet. It's filled with leftover material and patterns and thread and needles and pins and seam rippers and snaps and zippers and every other sort of thing you might need to sew with. I ended up throwing out a whole bunch of pieces of fabric that were so small as to be unusable. Also, some other stuff. And then I mended a pair of Mr. Moon's shorts and patched a rip on a pair of his jeans. Stuff that had been sitting there waiting for me to do since Noah built the ark.

As the day progressed I felt better but not good enough to qualify as "good." One of those days. I really do think that the current occupant of the White House and his shit are affecting me more than I even realize. And of course, it's not just him. It's the way so many people seem to feel as if they've been given permission to voice their racist, ignorant bullshit anywhere and anytime. How can these people be so gullible to think that this man cares about them in the least? I think it's pretty obvious that he cares about:
1. His daughter Ivanka, and
2. Himself.
And not even necessarily in that order.
Actually, of course not in that order.
Is Barron even still alive?

Well, I could obviously go on for days and really, there is nothing at all in the world humorous about any of it. It's just so fucking infuriating how low the man sinks in his lies, his demented verbiage, his smirking big orange face with that dead animal on his head. Watching footage from his rallies is enough to make a person with an IQ over 75 weep with despair. Remember when Hillary called his followers "deplorables"? My god. And there are so many of them who eat this horse shit up and don't care at all that he's making things up as he goes, slandering people whom he has a grudge against, claiming victories that are completely false, and goes against everything that Jesus supposedly ever taught. All they see is a "winner" who comes right out and says what they have been too ashamed to say out loud, thus giving them permission to do the same. 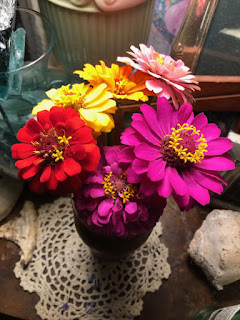 My first little zinnia bouquet from the garden this year in my granny's copper vase that I've been putting zinnias in for over forty years. There's no slime-bellied, lying, idiotic, fascist, racist, misogynistic, homophobic, ignorant pig that can detract from the glory of those colors.
I'm sure I missed about forty or a thousand adjectives I could have used but you get my point.

Happy Friday, y'all.
Let's see what tomorrow brings. Let us all continue to gird our loins because loin-girding is definitely necessary in these strange and horrifying times.