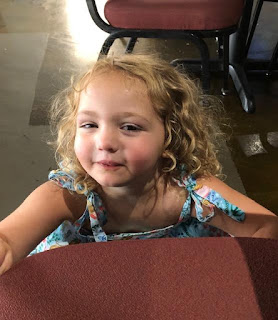 Because I really needed to get out of the house today I went with Lily and her children to town where we went to the library, to lunch, to Publix. I didn't need anything, really, except to be around people, to be be forced to talk, to interact, to hold little hands in my own.
When I got to Lily's house I was happy to see Sammy who appeared to be as cheerful and happy as an old small dog can be. He sniffed me and let me pet him and the children told me all about how he's doing. The only problem they're having is that the cats are upset and one of them is peeing and pooping in Owen's bed which, as all of us cat people know, is how they express their vast displeasure.

Anyway, we all got into Lily's van and drove to the library where books and movies were checked out. And then we got into quite the debate about where to eat for lunch. Lily and Owen wanted to go to Persis, the Indian buffet. Gibson did not. He wanted to go to Jason's Deli because they have all-you-can-eat ice cream and also, there's a guy who works there who jokes with Gibson and Gibson adores him. I didn't care. When I'm in the anxiety phase of life eating is not my top priority. We did end up at Persis, Gibson having been bribed by the promise of being able to watch his movie first when they got home. He had picked out "The Brave Little Toaster" which he claimed to be his favorite movie. Persis which was good, as always. After Owen finished his three plates of butter chicken and rice he laid down on the settee by the door and listened to the audio book he'd checked out at the library. "The Little Prince." 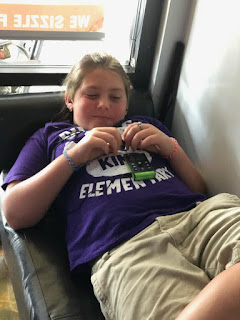 He was a happy boy.

Then on to Publix where Lily and the boys went in and Maggie and I stayed in the car. Every now and then Maggie would say, "I like you, Mer."
"I like you, Maggie," I would answer. "And I love you."
She was watching some duckie thing on her mother's phone that she loves. She also told me, out of the blue, that she used to be a grandmother when she was big.
Interesting. I tried to get more information about this but that was all she seemed to have to say about the matter.

And then we drove back to Lily's house where Sammy greeted us with more fancy and athletic prancing and dancing than one would expect from a ten year old dog. Dang but he's cute. I like him because although he is friendly and enthusiastic he does not appear to be clingy and needy. And by the way- yes, they are keeping him. The trial period is over.

And then I came home and here I am and oh- by the way- one of the five young chickens got slaughtered in the night by some predator. Probably a raccoon or a possum. So very sad but as we all know by now, it happens. Quite frankly, I'm surprised that it's taken this long for one to be killed. None of the other chickens seem to be much perturbed but I have not gotten one egg today and that, I believe is the telling sign.