The Birthday Celebrations Have Now Begun 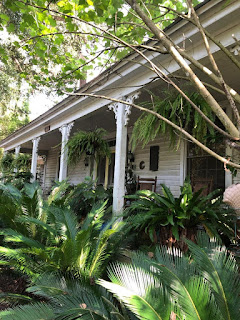 Well, tomorrow we'll be leaving the sweetness that is Lloyd and heading up to the loveliness which is North Carolina. I'm just about packed. I've polished my silver bracelets. I've cleaned out the hen house and taken the trash and recycle. I've ironed all of the shirts Mr. Moon might want to take. I've done every lick of laundry. I've thrown out leftovers to the chickens that we won't be eating. I've watered the porch plants. I've organized medications and supplements and even- in order to prevent forgetting them- packed them in my Virgin of Guadalupe bag that goes on every trip with me because it holds a whole lot of stuff.
Honey, I have shaved my legs.
I guess I'm about ready.

It's already been a very good birthday weekend. Last night Mr. Moon discovered that one of the many random networks we have was streaming "Havana Moon" which is the concert footage from the Rolling Stones concert in Havana, Cuba. I've been wanting to watch that film for ages now and finally- there it was. I enjoyed it so much. It seemed to me that the Stones were as happy to be there as the Cubans were to have them. It's so crazy to think that forty years ago, a Cuban could be jailed for owning a Rolling Stones record. But there was the one small sliver of time when things were loosening up between the US and Cuba when Obama was president, back when we all still believed in things like progress and peace and (dare I say it?) hope and change, and the Stones got the opportunity to play in Havana and it was a really powerful event. It happened just days after Obama and Michelle and their daughters visited Cuba themselves which was the first time a US president had visited the island nation since 1928. In fact, the Stones had to reschedule the date of their concert because of Obama's visit. And Obama mentioned them in the speech he gave to the Cuban people. They ended up playing on Good Friday which the Pope himself took a position on, telling them that no, that just would not do.
The Stones, however, basically told the Pope to fuck off and I would say that it was indeed a very good Friday.
I'm not sure I've ever seen any of the Rolling Stones' concert footage where the band looked so happy. Thrilled might not be overstating it. In fact, it appeared that both the audience and the band were thinking the same thing the entire time which was, "Can you believe this?"
This occurred in 2016, three years ago, which was also the year I got to go to Havana with Lis and other musicians from the St. Augustine area and I was just talking to her about that trip and how that was a magical opportunity and how very, very glad that we got to go.
I think there was lots of magic in Cuba that year.
Of course Trump has tightened everything back up again because he is evil. There is no other possible reason he would do that. Which is pretty much how I feel about everything he does.
But on March 25, 2016 the Rolling Stones put on a free concert that an estimated half a million people showed up to see and trust me- there was joy. Hell, even Charlie Watts was grinning.
I know. I KNOW! I've talked about this before but I suppose that this concert can rightly be called another of the Known Miracles of the Church of the Batshit Crazy. Just the logistics of the stage and electricity and lights and porta potties and speakers and, and, and...
I guess they shipped it all in from Miami. I have no idea. I know for damn certain that Cuba didn't have the infrastructure to put on an event like that.
But god, it was a great concert. They did long, long jams on some songs and just wove the magic of rock and roll until the crowd was frenzied and the band kept smiling bigger and bigger and Mick got more and more outrageous and he spoke Spanish during the breaks between songs which everyone loved.
Oh my. So that was last night and tonight we'll eat our supper and hopefully get to bed pretty early because we want to leave as early in the morning as is possible while still being civilized so that we can take plenty of time just wandering and meandering our way up to Athens, Georgia. We even have real, true paper maps!
Here's the screenshot of a bit of texting that I got from Mr. Moon the other day. 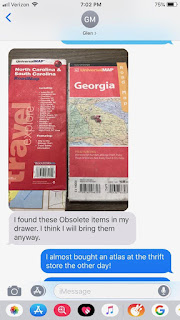 Google Maps is great but there is no substitute for a map that you have to unfold and squint to see the little roads on.

You know what I just realized? Mr. Moon has not packed one thing as far as I know. Maybe I better go suggest to him that it might be a good idea to start. Of course all he has to pack is his shorts, jeans, shirts and shoes. He already has a dopp kit filled with all of his other stuff. And god knows he's not going to shave his legs. He did buy snacks for the journey which I hear includes M&M's.
Sigh.
Well. Vacation.

If I don't check in tomorrow it'll be because I'm having birthday adventures. But I'll let you know how it's going soon. You know I will.