That Was Fast But It Was The Best 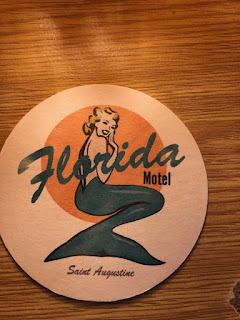 We are back from our teeny-tiny get-away where we had the very best time. It was what I'd call a perfect trip.
We started out Sunday morning and decided to take the backroad, Highway 90, instead of I-10 and that is just the prettiest road. Before we even got out of Monticello we'd stopped at an estate sale and rambled about in a big old beautiful house that reminded me a lot of our own house and looked at stuff. We didn't buy anything but it was fun. I do have not-a-buyer's remorse about a very large blue rug that was literally threadbare in places but it sparked something in me and the color was gorgeous. The difficult part would have been getting it in the car and it was easy to rationalize not buying it because of the wear and tear in it but the fact that I am still thinking about it is telling.

We drove through pasturelands and past woodsy places, miles and miles of empty beauty, dotted here and there with cows or crops or houses that caught our eyes, some large and stately, some small and humble, all old and still standing, straight and true. There were little towns and smaller villages, all of them with interesting things to look at. We stopped for lunch at a country buffet place and got there right before the church crowd arrived. I swear- everyone in the town of Madison, Florida must have been there for lunch. I feel quite certain that every church was represented. The food was good but the people-watching was better. One little girl at the salad bar was piling cheese on her plate and with no self-judgement at all said, "I love cheese. I could eat the whole world of cheese."
That tickled me. She was skinny as a bone and although I bet that in forty years' time all that cheese is going to show up, for now she is as free and passionate about her love of cheese as she could possibly be.

We rolled into St. Augustine in plenty of time to relax and get ready and so we did. The little motel which has been remade into an Airbnb rental was just swell. I loved it. The room was pretty small and one would not want to have to sling a cat in the bathroom but it was charming. 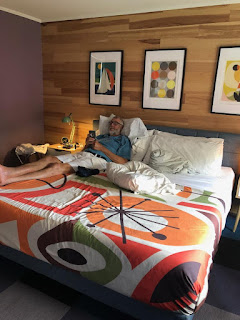 The bed was comfortable, the AC worked just fine, and if we'd had time we could have made use of the free bikes that came with the room. Helmets included. 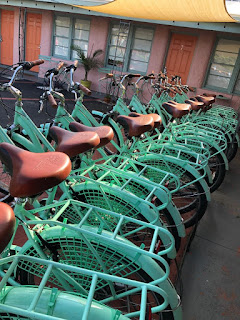 Someone has put a lot of time and effort and thought into that place and it shows. I wish them well.

But we weren't in St. Augustine to hang out at a vintage motel. We were there to celebrate the Williamsons and the love they've shared, not just with each other, but with their entire community for forty years.
Here's a funny thing- I had almost no anxiety about this celebration at all. I feel so comfortable in St. Augustine with the people I know there. I had seen a great many of them back in March when we went to the big party at Gator Bone but some I had not seen in years. And yet- I felt as welcomed as ever by these beautiful people. As soon as we walked out onto the huge deck under the trees where the stage is I saw three people immediately whom I just love. And it went from there.
There were hugs and hugs and hugs. It felt like joy. So many people were there to celebrate. I know I talk a lot about how beloved Lon and Lis are but it is never hyperbole. These two good people are simply adored.
And you know why?
Because they are as grace-full and loving and caring as any two people on earth. Because their love for each other is so apparent that it doesn't even need to be seen. It can be felt. Because they have and will go out of their way for anyone in their community and their community is huge. They cherish, they support, they work, they delight. And of course, they entertain.
They played the first set with the rest of the Gator Bone band- people they've been playing with for decades. Lon had come down with some sort of cold and couldn't sing and Lis was coming down with it too and had a sore throat. I could tell that they were both exhausted but they are professionals and I think they were buoyed by all the love. Glen and I got to sit with Lon's sister and her husband whom we haven't seen in awhile. They are wonderful people too, and actually live in Monticello. We also shared the table with the woman who goes by Lulumarie in the comments here and her man. I always refer to Lulu as "the sweetest woman in the world" because, well, she is. It was so good to get to spend time with them. We enjoyed the music and the breeze and seeing and talking to other old friends and then it was Sam Pacetti's turn to take over the music and he did a beautiful job as he always does and made a little speech about how Lon and Lis had taken him in when he was very young and encouraged him and helped him. Everyone in the place probably had a story they could tell about what these people have meant to them in their lives. Every story true. Every story heartfelt. Every story different and yet, the same in that all of us (oh, yes! I have my stories too!) have felt loved by them, often when we needed it most.
When Lon's sister's husband got up to make a toast he asked for a show of hands of all of the people who'd been at Lon and Lis's wedding forty years ago that very day. I was amazed at the number of people who raised their hands. And then someone pointed out to me that the wedding had been in Tallahassee which is where they'd lived at the time and this made it even more remarkable.

There was a photo album of the wedding day pictures and I looked at them and was astounded at what children they were when they married. I mean, they weren't really but in a way, they were.
Here's one of my favorite pictures from the album. 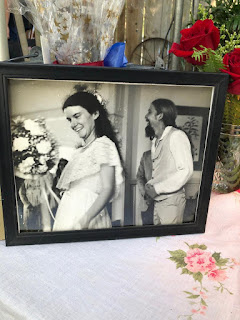 And here's what they looked like yesterday, forty years later with their son, Walker. 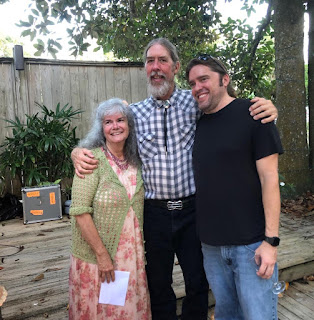 No longer children, even their child a grown man, but still beautiful, still in love, still together almost every minute of every day.

There was champagne, there was cake. There was music and there was catching-up. There was dinner and there was laughter and there was the deep appreciation of life and of love that only people of a certain age can feel.
When it came time for me to say good-bye to the anniversary couple, it felt, as it always does when we part, as if I was leaving part of myself behind with them.
My heart part, I suppose.
I admonished them to get some rest, goddammit! Those two people don't even know what rest looks like but I think that in this instance, they might at least attempt to try.

By the time Mr. Moon and I got back to the Florida Motel we were exhausted and happy and full and I, for one, was tipsy. I will not deny it. We watched a little TV and Mr. Moon had some cake that we'd brought back and then we cut off the lights and fell asleep and didn't wake up until after eight this morning.
And then, as a truly lovely lagniappe, Lulumarie and her fella met us for breakfast at a darling diner where we ate breakfasts fit for kings and chatted and laughed and bemoaned the state of the union. It was really fun and I was glad of the chance to actually get to talk to John because although we've known each other for a long time, we've never really had what you'd call a conversation.
But today we did and I discovered that he is as nice as his lady and as sincere and caring as she is. If that's possible.
I'm not sure. But it might be.

And so that was our trip. We drove back along Highway 90 again and even stopped at the same buffet restaurant for our very late lunch. We ate lima beans and black-eyed peas and green beans and fried okra and real, true creamed corn and other delicious foods and then finished our drive through the green fields and forests.
When we got home, Mr. Moon had to go into the office for a little while and I unpacked and started some laundry and picked the garden. The green beans are really coming in and I have an insane amount of tomatoes, both regular and cherry sized. The cucumbers are doing okay although I don't seem to be getting them until they've overgrown themselves and turned yellow. The field peas are continuing to yield and the pinto beans are coming up. The corn is swelling in its husks.
But it's hot. And it's so buggy. And it's SO humid. And we may be getting a tropical storm at the end of the week because a low pressure area in Georgia is moving down to the Gulf and then it's going to gather its forces and turn back to land as a storm.
Probably.
This is almost an unheard of event.
I've certainly never seen it in my lifetime. Storms ALWAYS originate out in either the Gulf or the Atlantic.
But here we are and there is no longer any "normal" to be found.

I think I'm going to make us a sort of caprese salad for our supper. We certainly don't need much and maybe I can use up a few of those tomatoes. I still have a bit of arugula and some very fine basil and a little bit of mozzarella. Not a whole world's worth of cheese, but enough for us tonight.

Last night so many people said to me, "I'm so glad you came."
And to every one of them I said, "How could we not have come?"
And you know, it wasn't just that I was glad I was there. It was that I was thrilled to be there.
I was absolutely thrilled to join in with so many lovely people to celebrate two of the most beautiful people I've ever known. I can't tell you how fortunate I feel to know them. To have them in my life. I wish I'd been at their wedding but we didn't know each other yet.
Time was waiting.
And I know them now. And how lucky I am.

Yes. A teeny-tiny trip but huge in meaning and in delight and oh! I finished, finally, reading Duane's Depressed out loud to my own beloved husband.
I cried at the end.
It was all perfect.