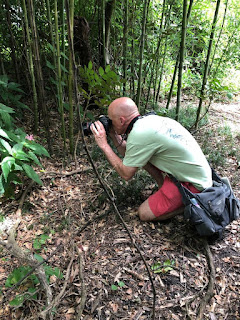 Steve Reed in Lloyd!
I had such a good time with him. When he got here it felt like we'd seen each other last week instead of a few years ago. I guess that's partly because of our blogs but also I feel a kinship with him because we both survived living in the central Florida area during formative years of our lives. We share similar experiences and it turns out we even know a few of the same people. Or did. But whatever it is that makes him seem so familiar to me, it's mighty sweet. I felt like we could talk without ceasing for about eight years.
As soon as he got here we hopped into my car and drove into Tallahassee to meet Hank and Lily and the kids and our friend Lauren and Mr. Moon at Tan's where we all dined on Asian Fusion which is what they call their menu. Everything from curries to sushi and it's all good. Every bit of it.
Owen and Gibson were very pleased to see Steve and Owen remembered him and Gibson soon got to know him.
"SteveReed" is what he calls him. One word. He asked him lots of questions as Gibson does. The children mostly wanted to talk about Sammy and how much they are enjoying having him around. He continues to be a fine, chill dog, making few demands and happily accepting walks and belly rubs.
Hank and Steve talked about trivia and places they knew in common because Hank used to live in Tampa and St. Pete for awhile. I asked Steve later if Hank had been anything like he'd imagined him to be and he said that yes, just about exactly.
When lunch was over there were the usual hugs and Steve got his share.
The other restaurant customers looked on with amusement. We are a huggy group.
After lunch Steve and I went to Goodwill where we had a good time and then we went to the Bad Girls Get Saved By Jesus thrift store and Steve scored a very fine and formerly expensive shirt that's pretty dang cool and fit him like it was custom made for him. And I found yet another vintage Revere Ware pan to add to my collection. So that was fun.
And then we drove back to Lloyd where we walked around the yard and Steve took some pictures and then he had to get on the road to Tampa. I was sad to see him go. I know we had a lot more to talk about.
He's such a kind, good man.
It's odd how some people just seem like family so immediately. Like a little room in our hearts has just been waiting for them to show up and move in.

And now I've picked the garden and am about to make our supper. Mr. Moon helped in the garden and knelt down to pick something and got ant bites all over one knee. Lord, y'all. This summer is a hard one. It got up to a hundred today, I think, and I've read that two people have gotten flesh-eating bacteria in a local lake. We don't dare go swimming in the Gulf because of that and toxic algae. It's scary as shit when you can't even swim in the ocean. When I was growing up, the ocean was considered the most healing thing in the world. It's always been my peace and my salvation.
And now, it's killing people.

Well. Today was a good day. I got to visit with a good friend and with my family. My hens are laying like crazy despite the heat. The young chickens are at the stage where they look just like miniature real chickens which is sort of funny and before I know it, they'll be laying too.
At least the female ones will be. Darla has started letting the kids go off by themselves and she and her sister Dottie have renewed their relationship. Darla is laying again and therefore, she has done her job raising them babies. The young'uns are their own little flockette but they'll eventually become part of the pecking order of the bigger flock.

We go on, we go on and if we are lucky, we have loved ones to share the ride. Or the walk. Or the dream. Or the continuing conversation wherein we try to figure it all out, try to accept that which is, learn to accept that we can be liked for exactly who we are. And we can laugh about it all.