There May Be A Quiz Later

Oh, but I really have nothing to discuss tonight except that I went to Costco with Lily and her children and then I stayed with them while Lily went to a parent-teacher conference with Owen's teacher and my chickens must be hiding their eggs because I am only getting about two a day and I was getting as many as eight and yes, I have lost two hens but still, the math is wrong and oh yeah, I made white bean chili for our supper.

Joe Cocker is being the back-door man and just fucked one of the hens and she fussed and ran back into the hen house and I know that Mick knows what he did and yet, he did not get off the roost and come and beak him. 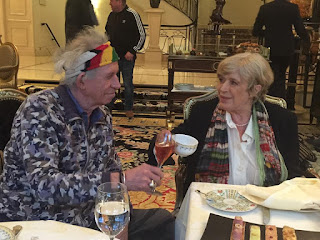 And so what does that last sentence have to do with this picture?

Once upon a time there was a rock band called the Rolling Stones and some said that it was the greatest rock band in history who, for better or for worse defined what a rock band should be and there is no doubt that when they were young, the boys in that band were considered to be some of the sexiest fellows in the entire world and redefined what sexy was in a way that's probably never been seen since. Say what you will- this is a true fact.

Anyway, one of the boys, named Mick Jagger, had a girlfriend named Marianne Faithfull and she was the epitome of sweetness and beauty and she became famous not only for being Mick's girlfriend but also for recording a song called "As Tears Go By" which Mick and one of his band members named Keith Richards wrote. It was a beautiful romance and they were a beautiful couple and represented something of the time which was primal and true. 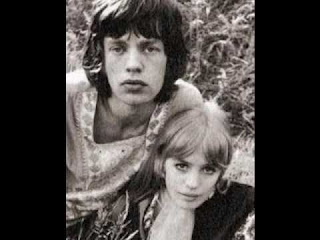 There was a sense of innocence, even as the Rolling Stones made their names and fortune being the very opposite of innocence.

At the same time, Keith Richards, who was the guitar player for the Rolling Stones had an equally beautiful girlfriend and her name was Anita Pallenberg. Anita's beauty was a different sort than Marianne's. A bit more dangerous, a bit sharper but she and Keith had children together and represented another sort of relationship and love. 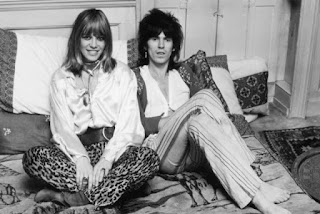 
which is so soul-searing it still knocks me to my knees and takes my breath whenever I hear it.

And that picture above, of an old man toasting an old woman?

Well, that's the guitar player and the lead singer's girlfriend all these years later and what Keith Richards wrote on Facebook where he posted the picture was, "Loved seeing Marianne."
Oh, that smile on his face tells me that is true. He did love seeing Marianne.
Anita, whom I wrote about a while back, died in June of this year, but I am so glad to see Marianne looking very much alive and well.

Roosters and rock stars.
They have so much in common. In my yard, sometimes even names.

And there, my dears, you have your history AND biology lesson in one go.

Thank you for indulging me once again.