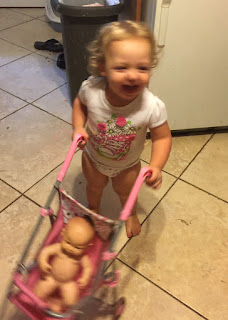 Zoom! Zoom! Zoom! She pushed her baby doll in the stroller at one hundred mph across the kitchen floor and laughed and laughed when I would put my foot out to stop her. One time I didn't put my foot out, being distracted by something and she tumbled forward and had a spill but the baby remained in the stroller and Maggie's tears lasted for about four seconds and then she went on to something else.
Yes. The picture is blurry. Every picture I took of her today is blurry. Except this one. 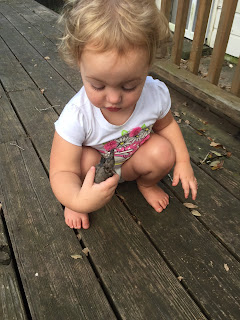 See that thing she's holding? That is a toy armadillo which is so realistic that I honest to god thought it was an actual dead baby armadillo on the deck at Lily's house. I called to Owen to come and look at it and he was like, "Uh, Mer. That's a toy."
"Oh," I said. "I thought it was real."
"Oooo-kay," he said.

No one can put you down like an eight-year old who knows more than you do.

But hey- Maggie thought it was a doggie so I'm not the only one who was fooled. At least that's what she called it. She made it walk and said, "Doggie, doggie, doggie."
That girl is so smart. When it was time to go pick up the boys at the bus stop I put her seat in my car and told her where we were going.
"Owen?" she asked.
"Yes, we're going to go get Owen."
"Gibby?" she asked next. It just about kills me that this is what she calls Gibson because that is what my father's father called me because Gibson is my middle name and I was named after his mother, Mary Gibson.
"Big bus?" she said.
"Yes. We will wait for the big bus."
And so we did and when the boys got off the bus she was thrilled to pieces and when Gibson ran to kiss her, she reached around his neck and kissed him back and I almost could not handle it.

I was watching the boys and Maggie this afternoon so that Lily could go shop at the One Week Boutique and don't ask me about that. It's at the Civic Center, it's huge, they sell children's clothes. That is all I know. By the time she got home she was regretting her decision to go but I think she's coming down with whatever version of this crazy virus we've all had that her body decides to go with. Will she puke? Will she have upper respiratory symptoms? Will she run a fever and have body aches combined with all of the other symptoms?"
Choose one from column A. Etc.

Her forehead already felt hot to me when she got home. I used my Mama TherMOMeter on her and that hand is pretty darn accurate.

Today is the first day that I've really felt recovered since I got the damn thing. I took a very good walk this morning and did not think I was going to die. Hallelujah and praise the Lord. This is the illness that just keeps on giving.

Anyway, life goes on and let us be thankful for small but positive steps in any healthful direction. I was glad to be able to hang out with the kids although Owen climbed the loquat tree about halfway up to the sky and when I discovered this and told him to come down he said, "My mom lets me," which is the default response to anything the kids want to do that I don't want them to do. I texted Lily and she said that no, he is not allowed to do that. I feel sorry for kids today. That age-old strategy for getting to do things they shouldn't when Grandma's in charge just does not have much chance of working now. He hasn't had a seizure in quite awhile, knock wood, but if he did have one up in that tree...
Still, it was amusing and rather impressive to see him get that far up and it was even more amusing when the cat climbed the tree to be with him.

And, since things are never allowed to get boring around here or anywhere else, there is a tropical depression in the Gulf which is projected to become a hurricane by the weekend and could quite possibly affect us but most definitely is going to affect my beautiful, beloved, spiritual home of an island, Cozumel. 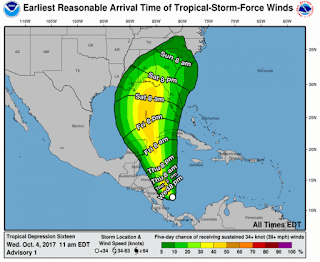 In his blog at Weather Underground, Dr. Jeff Masters, hurricane expert had this to say:
"If this track does indeed verify, I expect that TD 16 will be a Category 1 hurricane on Friday afternoon when it makes its closest pass to Cozumel, the northeastern tip of the Yucatan Peninsula, and the western tip of Cuba."

Luckily for Cozumel, they do not have to depend on DT for help if the hurricane does affect them. The Mexican government is hell on wheels when it comes to recovery and those people know what they're doing. No one will be throwing paper towels at them and then saying, "Have a good time!" as he gets on his plane and flies away.

So. We tumble and fumble and carry on and it's October 4th, 2017 and I have the air conditioning on again. We slept without it last night and it was not that comfortable and it's supposed to be even warmer tonight. I really hate the idea that we might lose power again this weekend but it will be what it will be.

Zoom, Zoom, Zoom! goes life and you cannot put your foot out to stop it no matter how much you want to.