Mary Moon! THIS Is Your Life! 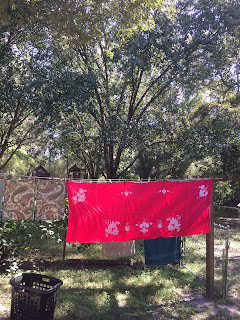 And it's been another very nice day here in Lloyd. Mr. Moon jokingly asked me last night if I was going to get up early today and make his breakfast before he left for Georgia.
And I asked him if he would be getting up late and making mine.
We laughed.
When I got up he had been awake and getting things done for awhile but not for so long that I was shamed for my sloth, and I did indeed make breakfast for both of us once I'd had my coffee and looked at the paper.
I've always said that there is real time and then, there's Glen time and he admits this is true.
So when he finally pulled out of the driveway, I'd done some laundry and made that breakfast and whipped up some of my world-famous gourmet tartar sauce (haha!) for him to take with him and walked for an hour but I met him in the road and we kissed goodbye again.

And I was quite productive for a few hours, hanging laundry, cleaning out the hen house, and then working in the library again, rearranging books, culling books, cleaning shelves, and dipping into photograph albums which are kept in there.
Just a little bit.
Looking at old pictures breaks my heart. I understand that this is something which is supposed to cause smiles and joy but for me it's as if all I am doing is looking at images of ghosts. The ghosts of people who are no longer with us, of course, but also the ghosts of babies who have grown up to become adults and for some reason, that is so hard for me.
Perhaps because I have loved each and every stage of my kids' lives (well, except for maybe a few teenaged moments) that I am still grieving the loss of those suckling babies, those feisty toddlers, those first-day-of school children, and yes, even those teenagers who looked at me and the camera as if they knew everything and maybe they did.
So that whole library thing is difficult for me and I even have emotional attachments to a lot of books that I know without a doubt that no one here will ever read again if they ever read them in the first place (the teachings of Plato? the complete comedies of Shakespeare?) that it's so hard to toss them into the donate box and yet, I realize logically that it's the right thing to do.
But then, I stumbled upon these pictures in a white envelope and I may have actually posted them before but they undid me in every way. 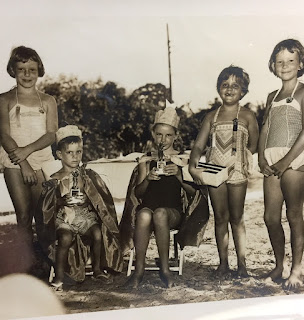 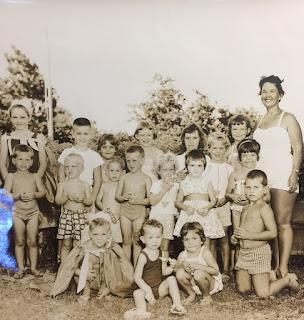 And here I am again, the little girl with the missing teeth in the back row. My brother is the cute little guy in the middle row, fourth from the left.

These were taken at Aunt Dot's preschool when I was probably about six although I can't remember going there until I was at least seven. It was during the summer because I never attended Aunt Dot's during the school year as I was already in elementary school.

Look at how beautiful Aunt Dot is! We were wearing swimsuits, for the most part, because Aunt Dot had a pool and we spent most of our time with her in that pool, learning to swim and generally being fishes. Aunt Dot is one of the people who was responsible for me being as sane as I am. She either really loved me or else she was the best actress in the world.
I think she really loved me.
I can still remember her skin, brown and warm from the sun and yet, somehow so soft. She always talked to me as if I were an adult and she is the only grown-up I can ever remember who spoke to me of my father whom my mother had left when I was five, and who I didn't see again until I was thirty.
She somehow knew I was grieving for him, for the loss of a father, no matter how lousy a drunken daddy he'd been and what she said was, "Mary, I think that your father really must have loved you and been a good person when he was around because you are such a good girl."
Or something like that. And oh! How I needed to hear those words.
My brother and I went to Aunt Dot's for several summers while my mother was in Gainesville, getting her degree in education so that my grandparents, charged with our care did not have to deal with us for at least a few hours of the day, and as I got older, Aunt Dottie gave me responsibilities from being a life-guard to helping her clean up which would never be allowed now, but it all rested easy and proud on my little girl shoulders and somehow made my life more bearable.
She took me camping, she had me over to spend the night. She made clothes for my Barbie. She didn't make a big deal out of any of this, she just took me under her wing as if it were the most natural thing in the world, and I loved her with all of my heart and I adored her husband whom we called Uncle Jack who was funny and sweet and loved the spaghetti his wife made.

Funny. I remember that bathing suit my brother was wearing but I can't put a name on any of the children in those pictures. Not a one although I think that the boy who is kneeling in front of Aunt Dot may have been a boy who peed in his pants in first grade and I do remember his name but I will not tell you what it is. We never forget these things, do we? And I believe that's his sister, two kids down from my brother with the sash around her waist and the piercing look in her eyes. I do not remember her name but damn- even I can remember that face, those eyes.

I am almost certain that I have told these stories before and for that, I apologize, but some stories you have to tell over and over again, even to yourself because they are what you are made from, they are what have made you who you are.

After I found those photos, I absolutely had to take a nap and I slept for far longer than I had thought I would. An hour passed in a breath and Jack slept with me.

Here are two raccoon paw prints I found in the mud today on my walk, perfect in their form and their impression. 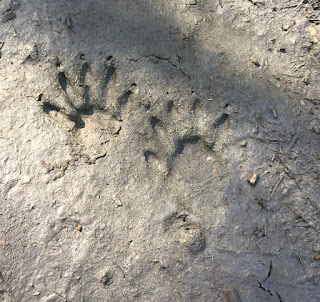 Look at that!
And here is a picture of my handsome rooster, Joe Cocker. 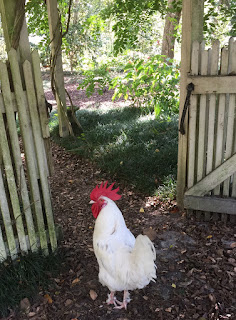 Ain't he just a corker? Good Lord, that comb!

Speaking of chickens, I need to go shut mine up.

I wonder what tomorrow will bring.