A Sunday Which Included Many Fine Things

Vergil and Mr. Moon went hunting early, early over at the deer blind with the custom camo curtains and they did not see a darn thing except for a wild turkey and so, as is so often the case, it was hunting and not shooting.

They came back here afterwards and Vergil helped my husband move some heavy stuff which needed to be moved including some furniture from my office which had wood-destroying organisms in it and then Vergil went home and the next shift of helpers came over- Lily and Jason and their cubs. I made a big breakfast of sausage and bacon and eggs and pancakes and Jason helped bring the mattress downstairs from where Jack had spent all that time locked in the bedroom upstairs where he understandably destroyed the bed. I had woken up at three a.m. and almost decided that I wanted to switch bedrooms to the back bedroom where Mr. Moon and I used to sleep until we moved the most comfortable bed in the world into the guest room which is where we sleep now because we just slowly and surely made that bed our own bed and it weighs several tons and so it was easier for us to just re-nest than it was to move the bed.
But.
Sometimes a girl needs a drastic change and I don't want to cut my hair.
So after breakfast we all talked about it a lot and Mr. Moon was already exhausted but Jason was pumped and ready to go. I thought about how I needed to get blinds for the old room if we were going to move back in there and change the pictures and move my vanity back in and then move a dresser in the room where we sleep now and all of that was doable but then I looked at the wall right beside my bed which has become a sort of vertical altar, hung with holy relics which watch over me as I sleep and I said, "Oh, not today. Not today." 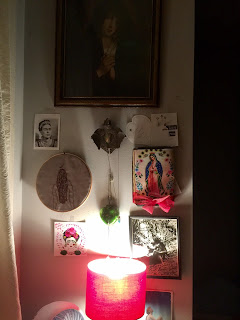 But it was fun having the Hartmann's over and I got to spend a little time with this girl. 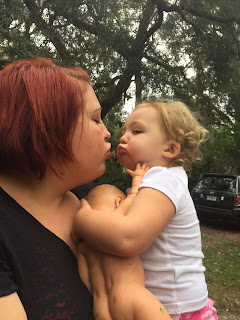 Oh, little Maggie. You are a princess and a precious. You are tough and you are determined. You are loving and so smart, and you are nobody's woman but your own.
She is such a pucker-up and kisser, pointing those rosebud lips at her intended kissees and we rush to receive them. As Gibson said today, "She loves everybody in our family so much!"
And so she does. Her love for her Boppy is enormous and it is no secret that I am second best but that's okay. Second best is fine. I admire her priorities. But she spent some time with me today while Boppy was resting in his chair. She wanted to read books and we would read a few pages and then she'd say, "That's all," and slide off the love couch and move back to the horse which she would ride for awhile. She became very maternal about that baby doll and would not put it down. We went outside for some stroll-arounds and she insisted on holding it, even though it is quite heavy for a doll and hard for her to get a grip on. I held her hand as we went down the steps and she said, "Thank-you, Mer," as pretty as you please and after Lily tried to remove dirt and snot from her face with a washrag which provoked much resistance, she said, "Thank-you, Mama," and that is my Maggie.

Now. I just think that's a dandy joke and someone needs to write a book about the development of humor in children and how to encourage that particular trait because if there's anything more important than humor, I'm not sure what it could be.

Before too long, Lily and Jason loaded their young'uns up in the car and I kissed them all good-bye and they went on to further adventures and I swear, I have been so lazy today and I don't feel bad about that at all. I swept and tidied and did some laundry and took a nap. And that was plenty.
It is so much cooler today and it is windy and has been gray and overcast and I've had the house open, the front and back hallway doors letting the leaf-rustling breeze sweep through them to clean and bless them.

The sun has gone down and the frogs are chorusing and the chickens have settled into their nests after their usual evening squabble about the interior real estate of the hen house and I am going to heat up some spaghetti leftovers and that will be so good.