I Am Such A Wuss And I Don't Care

Well, I took control and turned my mood around today.
How did I do that? you may ask.
Simple. But not easy. (For me.) I picked up the phone and called my doctor's office and rescheduled my appointment for next month!
Hahahahahahahahahahahahaha!
Now I'll just have to go through it all again in a month but hey! That comet may hit the earth, destroying all earthly life forms before then which would mean I never have to go to a doctor again! Kinda puts a little spin on the old perspective, doesn't it?

After the phone call I took a walk. I saw Ms. Shelly and had a chat with her. First thing she said was, "I gotta wash my windows."
I looked at her windows. They appeared to be pristine to me.
"Woman!" I said, "Every time I talk to you you make me feel bad about all the housework I do not do!"
She laughed.
She'd die if she walked into my house. One look at the mold on my walls and the dirt on my baseboards and she would flat pass out.
Anyway, I enjoyed my chat and then I went to town and met my husband and Jessie and August for lunch. We ate at a Cuban restaurant and I'm still full and August ate about half my sandwich. It was delicious and it was fun. 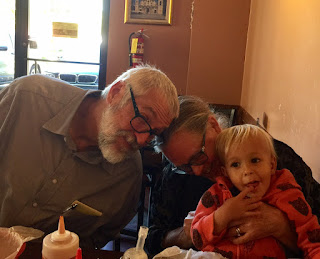 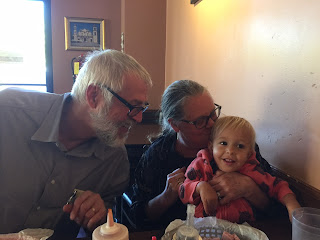 While August was sitting on my lap eating my sandwich I snuck in about fifty kisses. He's not a real kissy boy so I felt like I was getting away with something. I hope the poor child doesn't end up in therapy one day telling a professional how his grandmother would just never quit kissing him.
If he told me to stop, I would. I swear!
No does mean no. Even when it comes to grandchildren.

While Mr. Moon and I were waiting for Jessie and August to arrive, we shopped around in an Indian grocery store which is a marvelous place. Lily and I had gone there when it first opened but it has expanded quite a bit since then. There were all sorts of mysterious vegetables I've never seen before and an entire aisle of rice and there were pickles and beans and grains and, well, everything. I bought some beautiful small yams and also, this. 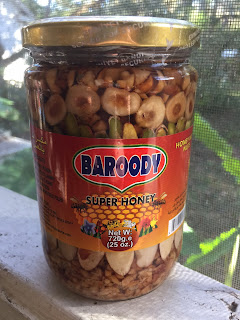 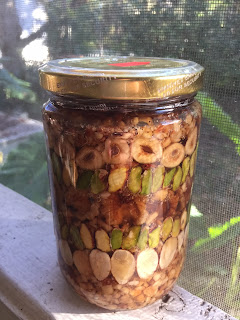 Super Honey! It's the most beautiful jar of food stuffs I've ever seen. Layers of different nuts and seeds, all in honey. I mean- I had to buy that. I have no idea what I'm going to do with it. Does anyone know what you're supposed to do with it? Eat it on pancakes and on ice cream?
That has to be about the most calorie dense food in the universe.
After candied bacon, of course.

So anyway, that's been a lot of my day. I also went to Costco and Publix which was fine, although strangely boring without any of my children or grandchildren but sometimes boring is okay.

The news is never boring these days and of course the Russian thing was the main topic of discussion today and I just have to wonder what's going to be coming out in the near future and I would not be the White House spokesperson for the money in the world and someday, Sarah Huckabee Sanders is probably going to write a book and make a  fortune but her soul is already gone.

And speaking of coming out- Way to go, fucking Kevin Spacey. Apologizing for a supposedly drunken assault on an underage boy thirty years ago and revealing himself to be gay in one breath.
As if so many ignorant people don't already associate male homosexuality and pedophilia.
I don't even have the words to say how despicable I find that and for a man who appears to be extremely intelligent, it was a stunningly irresponsible thing to do.