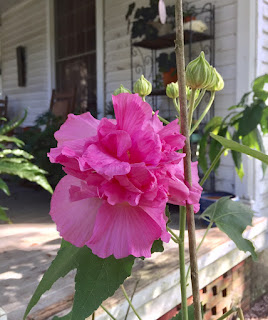 I have had about the most boring day in history although I wasn't bored. I spent most of it sewing and I have to say that at this point, King Richard's quilt looks like a color-blind circus costumer made it but I'm sure that by the time I embroider some on it, it'll be awesome!
Right?
I did get off my ass for about half an hour and went outside and picked up some windfallen branches and pulled a few spent rooster-tail lilies (why did I ever plant those damn things?) and sweated like a trouper, as my granny used to say, and came in and wondered if I am somehow damaged by old age or something and will never be able to work outside in the heat again.
That would be sad.
Speaking of working outside, I realize that after approximately fifty years of gardening I planted my seeds in a completely shitty way and although some of them are coming up relatively normal, some of them obviously got rain-washed by the gully busters we had last week.
So I feel pretty darn useless.

That's a confederate rose up there in that picture and I'm sorry but that's its name. We could call it by its formal name which is hibiscus mutabilis or it's other common name which is the dixie rosemallow.
Jeez. Not much way to win with this one.
Whatever you call it, it's one of my favorites, so fancy and pink, almost tacky in its exuberant girlyness. It really does remind me of the flowers that my best friend Lucille Ferger and I used to make with Kleenex and bobby pins. I just googled "making flowers with Kleenex" and that's still a thing. I wonder if Lucille is still alive. I can't find her via Google or FB although I think I did find her twin sister but only the fact that she is, or was at least, a physical therapist.
Of the other three siblings I can find no trace.
How odd. My life between 1960 and 1965 was so very wrapped up in the lives of the Fergers who lived at the other end of the street which I lived on in Roseland- the only paved road in Roseland proper then and the only paved road in Roseland proper now. When I go back to Roseland I can't believe how small it was. The house is still very much there although the garage where Mrs. Ferger washed the clothes in an old wringer washer and the chicken coop are gone. Five kids and the daddy was a barber. In those days, a barber, even in a very small town, could support a family of seven although it was always tough, making ends meet. I could tell even then. My family still calls soda crackers with peanut butter on them Ferger snacks. But Roseland was a poor place and the Fergers had enough to eat even if it was plain and simple and a car, even if it was old and rusty, and they had a record player which we listened to Mitch Miller records on. (Watch the bouncing ball!) They were Catholic which was an oddity in Roseland but not really that remarkable.
I'll never forget watching Lucille's brother cut the head off one of their chickens and indeed, it did run around for awhile, headless and bleeding. I'll also never forget camping in the yard with Lucille, our tent made of a blanket stretched between garage and chicken coop and fastened with clothespins. We burned Pic mosquito repellent coils and we got up in the very deepest part of the night and looked up at the sky and the number of stars above us was so unfathomable that I would say that that was my first religious experience and my first inkling of the concept of infinity.

I just went out and shut the chickens up and tonight, Joe Cocker is sleeping by himself and Mick is The Man. Would you look at this? 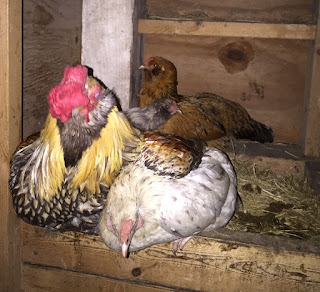 Mick has his wing over Miss Dora and if there is an explanation for this behavior, I do not know what it is. It's certainly not cool enough for them to want to share body heat. I just googled that (what in the world did we do before Google?) and it would seem that Ameracaunas are a snuggly breed and Mick is an Ameracauna. Ameracaunas are the ones who lay the colored eggs and frankly, I think they are a superior breed. Or at least a very sweet one. That's little Violet and Lucy behind them and I know that it's Lucy and not Owl because the egg I got today was the pale green one, not the blue one.

All right. This is what happens when I don't talk to another soul all day long.
Thank you for letting me talk to you.