Mr. Moon and I drove to Apalachicola for the day and just the day because it feels a little too close to King Richard's birth to spend the night out of town. We had some permit something-somethings to hand in and get something-somethinged, don't ask me, I don't know but I signed my name and it was notarized.

We sort of didn't plan things too well and by the time we got to Crawfordville we were starving so stopped for lunch in a little place called The Fisherman's Wife which is in an old house and we got salads with broiled shrimp and scallops and fish on them. They were fine salads although the scallops were tiny enough to use for a pencil eraser and the fish was a generic fish but all-in-all it was tasty and the massive amount of blue cheese dressing which was brought with the salads with real blue cheese crumbled in it made up for some of the fish and scallop deficiency.
Two tables in the same room we were in both said grace before they ate.
One table had two parents and two tween kids and the kids looked Asian and the parents did not but they were the All American family, eating seafood and french fries and onion rings and cheeseburgers, the kids teasing each other, the daughter looking at something on the mom's iPhone with her, the dad giving the kids the side-eye when he thought things were getting the least bit rowdy. The other table was a group of men, all manly looking and there was also a baby in a seat whom everyone seemed to know and cherish. After careful eavesdropping, it was apparent that this group of men were doing church work that day, clearing things out of the church and taking it somewhere. One of them was the pastor, I'm sure, and he said the grace and he blessed the work they were doing, the people who had prepared the food, and the food itself and that was nice.
I sort of loved watching the way the men dealt with the baby. It was just so damn cute. They all had opinions to offer about what he should be eating and how to deal with things like the baby crawling over and dumping out the dog bowls and what to expect when he started walking and so forth. The baby seemed very happy and content and made the sweetest little sounds.

So that was nice and on our way out of the restaurant I spied a bush which looked to me like a bay tree and it had the most amazing blossom on it. The leaf of the tree/bush smelled bayish and this is what the bloom looked like: 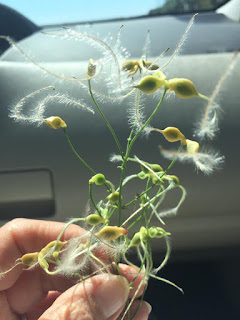 Soft little feather tendrils coming off of pods and I have never noticed anything like this before. I google-imaged bay tree blossoms but none of those looked a thing like this. Isn't it wonderful? Sort of Dr. Seussian. I posted it on Facebook and no one seemed to have an idea about what it was so do any of you?

I went and did a little Apalachicola shopping while Mr. Moon was flirting , charming,  dealing with the ladies in the permitting office in a business-like way. I had to go to the Grady Market, of course, to see if by a miracle there are any Johnny Was garments on major sale and there were not. A few were on 20% off sale but that means they only cost thousands instead of billions.
Okay, that's a bit of an exaggeration.
Still.
So then I trotted over to River Lily because how can you go to Apalachicola without going to River Lily which is the very best ladies' shop in the entire southeast? I did buy something there. I bought a cotton dress of beautiful blue because the ancient blue linen Goodwill dress which I have worn to every one of my grandchildren's births is literally falling apart and although I am going to try and repair it, if I can't do that adequately, I will wear this new one. It is soft as a cotton ball and blue as the fall sky.
One more step in being ready for this birth.

And I went to the bookstore because I have to go to the bookstore but the owner whom I am trying to seduce into being my friend was not there but that was okay. This may be a lifetime project and I am patient. I did buy a gorgeous ball of yarn and a pattern to make a hat with it which is ridiculous because goddam it, I have one million gorgeous balls of yard that I've been too weak not to buy there even though I can't knit for shit and my crocheting is just as bad if not worse.
Oh well. I am supporting a beloved local business and there's nothing in the world wrong with that.
Who knows? Maybe I'll actually knit a hat. Miracles do occur.

And then we met up, me and my husband of 33-years and had coffee and then drove home, stopping in Carabelle to buy rock shrimp and I'm going to cook some of that for our supper. We had thought about eating supper in Apalach but we just weren't hungry and yes, we could have parked our butts outside of the brewery on this beautiful day where the temperatures were perfect and the air was sweet with the breath of fall, but really, I just wanted to come home.

It wasn't an anniversary filled with dramatic and overt gestures of love and romance but it was a sweet one. We made yet another step on the road to fulfilling a goal we've shared for twenty-four years and we talked about our lives, our grandchildren, our children. How incredibly unbelievable it is that here we are. Maybe after this new baby is born and things have settled down and the holidays have passed, we will go have one of our wildly-inappropriate-for-our-age honeymoons.
Meanwhile, because it is chilly this evening and going to get chillier tonight, perhaps we shall snuggle under the covers, holding each other tightly as we have done now for so many years.

And isn't that what it's all about? Having someone to hold on to through the good times and the bad, to always have that person to nest with, to feel safe with, as the rest of the world goes about its business?