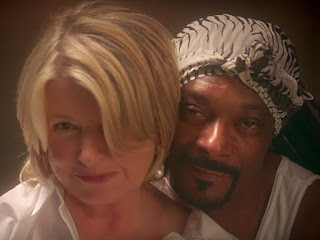 Y'all! I don't really want to be Martha Stewart. I mean, she seems like a pretty okay woman with a good sense of humor to me and god knows she's got a lot of energy and survived her prison sentence with a lot of class in my opinion but mostly, I just love that she and Snoop Dogg are working together and appear to actually enjoy each other's company. And who the hell wouldn't want to be friends with this guy?


Anyway, moving on as I will never even meet Snoop Dogg or be anything like Martha Stewart who can do EVERYTHING, obviously, although I did spend quite a few hours today working on Baby King Richard's quilt and I have almost have one part of it done. I also got to go hang with Magnolia June for a short time today, just the two of us, and it was sweet and fun. I love that little woman baby, that sassy pants princess, that curly-haired cutie. She likes me okay, too. We got a good thing going on. She's so loving with everyone to tell you the truth, but I like to think that she has a special place in her heart for me.
We looked at some books and laughed and laughed at a sound that a button in Elmo Learns To Use The Potty makes which is supposed to replicate the sound of toilet paper spinning off the roll. She let me scratch her back but she would not let me give her a foot massage.
"No," she said. And so I did not.

It rained hard again this afternoon and we got a few mighty cracking booms of thunder and today I have felt relatively cheerful and so much less despondent than yesterday.
Again- no idea why. Absolutely nothing has changed.
More of my seedlings are coming up in the garden and I washed some rugs and chased a roach which was so big that I honestly didn't want to kill it because the guts would have been just too much to handle without a Hazmat suit so he's now somewhere under a kitchen cabinet or maybe the dishwasher.

And that's what's happened in Lloyd today and I'm going to broil some snapper and make my famous gourmet spinach and rice casserole (haha) and maybe some stewed tomatoes.

None of this is special in any way but because I am feeling not-crazy, it just seems rather heavenly. Well, except for the cockroach.