And Pancakes Were Made Once Again 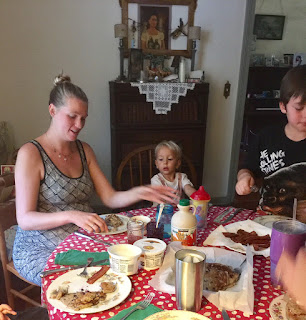 It was a pancake brunch Sunday here in Lloyd today. Lily and Jessie brought all the kidlings and I made blueberry, apple, banana, oat bran pancakes and bacon.
Does it go without saying that there will be bacon?
Oh, how we love bacon. 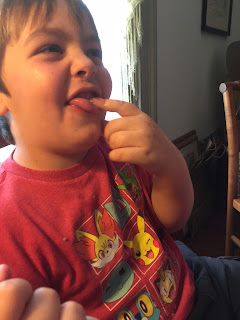 Gibson did not make us do the pre-meal hand and chant thing. I believe he was too hungry to remember it. Owen said he was starving too.
"But you already ate a whole bag of carrots!" his mother said.
I sure wouldn't want their grocery bill. And it's only going to get worse as those boys get older.

Maggie and August went out to play on the swing set. Mostly they wanted to climb the ladders to the towers and Maggie wanted to slide. 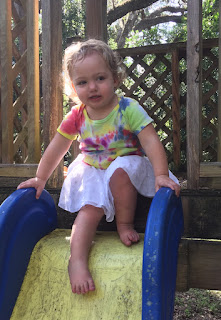 That child kills me. She'd climb the ladder to the tower, get on the slide, say, "Ready, set, go!" in her own language and then shoot down that thing like Dale Earnhardt on the racetrack. Inevitably, she'd hit the ground hard and sometimes even her little pumpkin head and she'd cry for about one second and then she'd run back to the ladder and do it again.
We kept asking if she wanted us to hold her hands.
"No!" she said.
From his perch on the swinging thing August said, "Careful, Maggie. Hold hand." 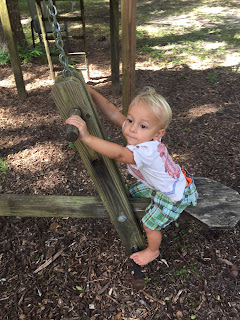 She ignored him.
I do not think it is too early to predict who is going to be the daredevil, risk-taker here.
She is not unlike her mother and all I can say about that is- Hang on to your hat, Lily.

August wanted to climb the towers too, and did. Jessie followed him, slowly and carefully, to stand on the ladder so that she could prevent him from falling down. He tried to push her off but he was quite polite about it and said, "Sorry, sorry."
I do like a child with good manners.
Maggie rarely neglects to say, "Thank-you, Mer," if I do something for her or give her something. Sometimes within seconds of protesting another issue at the top of her voice. I am not sure I've ever met anyone quite as mutable as my granddaughter. At least the pissed-offedness is balanced by the contentment and sweetness. And my god. She is so cute. That hair. Those perfect bow lips.
Look at this pair. 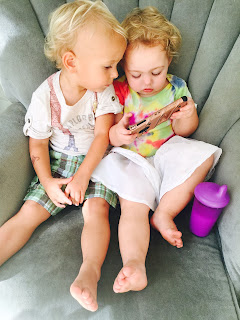 Jessie and I just stood and stared at them for awhile.
"They are so different looking," she said and I agreed with her.
"And both so beautiful," she added.

And another beauty some to come.