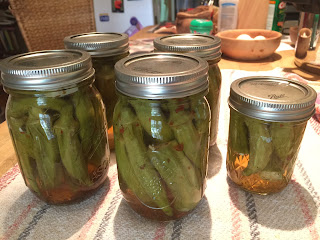 I have stayed busy, busy, busy today. I did go out and pick in the garden and the way I picked the edamames was to just pull the vines and then bring them into the shade where I sat and took the pods from their tough stems and then gave the vines to the goats next door. I have read that soybeans all come ripe at approximately the same time and since I'd already picked quite a few, I figured that these were the last of them and they surely all did seem to be at about the same stage of maturity.
Then I picked a large basket of the field peas and some okra.
I came in and washed the edamames, then boiled them in salted water and put them in quart freezer bags and popped them into the freezer. I blanched the last field peas that Mr. Moon shucked- about a meal's worth- and froze those. And then I got out the canning kettle and found enough jars and spices and vinegar to put up four and a half pints of my okra. I refuse to let that okra go to waste and I hope it is good.
And then, because I felt like being productive, I cut out another dress for Ms. Magnolia. It is going to be of the dinosaur material with a red ruffle on the bottom and a red ruffle on the shoulders and red pockets.
This pleases me so much. Who knew I would fall in love with sewing again?
But I surely have.

I remember quite well learning to sew in Home Ec in the seventh grade and then sitting at my mother's old Singer (the replica of the one I have now which was my grandmother's) and teaching myself how to use that machine with the perfect handbook those machines came with.
This was in Winter Haven where we had indeed moved after that summer in Gainesville.
It was a rather bizarre time in my life in so many ways. One, of course, being that we were leaving Roseland which I was both sad and thrilled about. I wanted to join the Girl Scouts, I wanted to take dance, I wanted to be near a library. I wanted to be somewhere where everyone didn't know me as the fat, smarty pants/teacher's pet. I wanted to be in a place where there was more to do, more opportunities.
But I knew, in my heart, that I was going to miss Roseland and that river and the woods.
I just didn't now how much I would miss it.
And I suppose I also thought that maybe once we moved, the nightly visits by my stepfather would cease.
Well, I was right about the Girl Scouts but wrong about the nightly visits.
And on top of everything, I had gotten a horrible case of what we called "ground itch" which ain't nothing but a form of hook worm. Kids got it in Roseland all the time because we all went barefoot and the larva live in the intestines of dogs and cats and also, wild animals and god knows we stepped in some shit. A simple case of it could perhaps just involve a meandering line of red on the foot where the worm is making its way under the skin and was treated in those days by freezing the worm with Ethyl Chloride which involves spraying the skin long enough with the stuff to freeze the worm underneath it.
And yes, it is a gross and as horrible as it sounds.
But the very worst thing about ground itch, is that it itches to the point of insanity. As the worm crawls, the itching commences and nighttime was when the worm crawled.
My mother took me to the only doctor in the area of Roseland and Sebastian in those days, Dr. Kip Kelso. I remember him distinctly. He had one eye and an eye patch. He was gruff and he was plain spoken. He showed Mother how to spray the Ethyl Chloride on my skin, warning her that if she sprayed it too much, the skin would become burned.
Burned by cold.
So then we moved and the ground itch got worse and Mother took me to a pediatrician in Winter Haven and by then my foot was infected and nasty and the ground itch was still there and it was just a fucking mess. I ended up wearing bandages stained with pus around my foot, covered by a sock and had to either hop on one foot everywhere or walk using the one tiny part of my heel on the affected foot which was not involved.

This was how I started school in Winter Haven. I was in the sixth grade and there were more kids in the sixth grade classes than there were in all of the classes together at Sebastian Elementary.
And there I was, hopping and wearing a sock on my left foot which by the end of the day had also become pus-stained and I, having been a smart fish in a very small pond, was worried sick that not only would no one want to be my friend, but that I would prove to be not nearly as smart as I thought I was.

The good news? Turns out that hopping everywhere is an amazing weight-loss exercise. Stress may have played a part in that too.

Mother was pregnant again and of course, worried sick that this pregnancy would not come to term either. C. had begun his new job at the community college and I'm sure he was stressed out. He was also still grove-tending and would go to Orlando every chance he got to work there.
And OH! I had completely forgotten that before we left Roseland, my grandmother suddenly became demented. I don't know what other word to use. But it was the most bizarre and frightening thing imaginable as my sweet little granny started telling us we had to wait dinner because Jackie Kennedy was coming to eat with us and also, that she was God, and Granddaddy was Jesus. Or something like that. She also became obsessed with our pastor and I think she gave him a bunch of money. Meanwhile, I was wondering if maybe she wasn't God. I mean...people must have thought Jesus was crazy, right? And hell, maybe Jackie Kennedy would come for supper. Anything was possible.
She was diagnosed with "hardening of the arteries" and put in a mental institution for awhile and then she went home and Granddaddy tried to take care of her. The man had never cooked a meal in his life and suddenly, he was having to do all of the cooking and laundry (they had a "maid" who came in to clean) and was taking care of her.
Could things get any stranger or weirder?
I mean, you almost have to laugh.

We lived in a house in a neighborhood which was fine. Nothing fancy and my brother slept in a breezeway between the living room and the garage but I don't think he minded. I had my own room and it was just a few steps down the hallway from Mother and C.'s room. We all shared the same bathroom.

And so there we were and Mother was completely taken up with her own worries and not paying attention again and C. was coming into my bedroom every night and I had worms in my feet and was trying to balance all of this with trying to fit in and make new friends in school and doing my best to prove that I was not an ignorant country hick and my grandmother, who had half raised me, was insane and my granddaddy, who had also had a lot to do with my raising, was having to take care of her.

I look back on all of that and it's simply unimaginable. And yet, once again, I lived through it. I lived through it and my foot finally healed and I discovered I was pretty okay in the intellect department and I made friends and I joined the Girl Scouts and that troop was a blessing in my life.
And I was thinner.

Soon, my life was about to change again when Mother had my brother. In some ways, it was the best thing that ever happened to me. In other ways, it made my life even harder. But I have to say- and I will stand by this to the day I die- falling in love with that baby boy probably opened my heart to the possibility of what true, pure, uncomplicated, unconditional love was.
And damn, I needed that.

So it's been a good day and I got a lot done and after spending all day out in the world with her babies, Dottie has them all back, safe and sound in the coop.
What a good, good mama!
I am sure those chicks will sleep very well tonight and I am relieved to know they have survived their first day out. 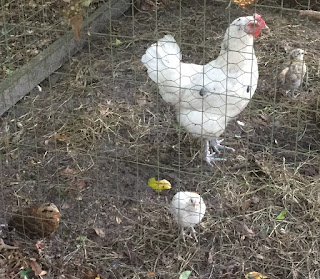 And I can't talk about what's going on in Virginia except to say that when DT got elected, I realized that I don't live in the country I thought I did and yet, I had no idea of the depths of that truth.

What in the world could cause those people to be so filled with hate?

I can't fathom it. And the well of hopelessness and helplessness feels as if there is no bottom, as if we are all drowning in the infinite depths of those dark, dark waters.