Why I Cannot Lounge, A New Business Idea, And Chickens. Trigger Warning 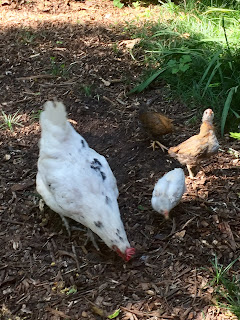 Well, there's Dottie and her babies. You can barely see little Rose behind Amethyst but she (or he) is there in the shadow. I threw out some old cornbread for them and they gobbled it up. I love watching them as they go about the yard, scratching in the leaves, the young ones following their mother's lead. They delight me in their adult abilities, their miniature size.
And Dottie delights me with her mothering, the way she watches over them and protects them and teaches them every second of the day, and at night she still spreads her wings over them keeping them safe as they sleep.

I got seven eggs today, one of them definitely a maiden egg. It is longer than a normal egg, and small, light brown. I would think that it is one of Owl's or Emily's as they haven't been laying yet but I think they will lay a different colored egg because that is a trait of their breed. So who knows?

And what I mostly did today was this: 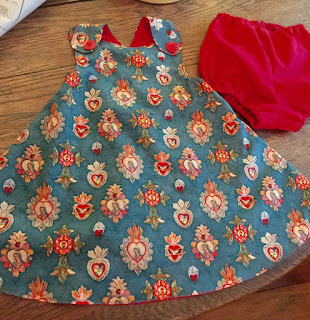 Another sundress with a red lining and red panties. I have a LOT of red cotton. Here's a close-up of the Virgin of Guadalupe material. Which I bought at...Walmart.
Oh, the shame and conundrum. 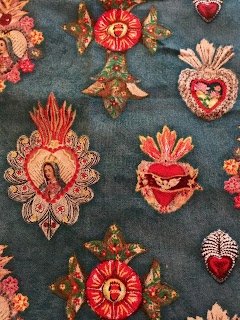 I'm thinking I should start making those in bulk and marketing them to rich followers of Catholicism and perhaps hipster parents. What do you think?

So that's what I have done today and I enjoyed it tremendously. What IS it about the pinning and cutting and stitching and ironing which is just so immensely satisfying? It's like making pickles, I guess. Something a housewife can do which she can look at and say, "I did that with my two hands," and it is something which is useful or edible and in the case of the pickles, can be admired all winter, albeit in dwindling numbers, every time the cabinet is opened and in the case of the garment, can be worn over and over and then passed down to another child.

I have been thinking about how when I was a young girl, after C. had quit molesting me (which happened about the same time I started my period which, I guess for a pedophile, makes a lot of sense) he became even weirder about me. Or at least, differently weird. He started what I can only call stalking me, knowing where I was every moment and being stricter with me and far less overtly affectionate. When we moved into our new house I did indeed get the most private room, the one farthest from C. and Mother's room but it had no lock on the door. It never did until my little brothers got old enough to want to get in my room and do their little impish boy things with my stuff, like painting everything in my room they could with nail polish, including my sewing machine case, my suitcase, and my baseboards. At that point, a sliding lock was put up near the top of the door on the outside to keep them from getting in and plundering but never a lock that I could turn on the inside which left me always feeling vulnerable in a way that even now I can feel in my gut and it doesn't feel good.
BUT, what I've really been thinking about was how C. would find me if I was in my room or just hanging out watching television and would quietly and in a creepy, threatening voice, tell me to quit being lazy and get out there and help my mother.
God knows she needed help with those two little redheaded boys, a year apart and each other's partners in crime, doing the things that little boys do. That was a full time job, not to mention laundry and meals and shopping and all of the million and one things mother housewives need to do every day. And this infuriated me. Not because I really minded doing things with and for the boys or any other household chores but because he never did one goddammed thing. He sat on his hideous weird black and red plastic recliner and watched TV (mostly a channel which showed nothing but a ticker tape of stock prices) and scratched his head and buzzed off the codeine he took to "prevent" headaches. He did not ever change a diaper as far as I know, much less rinse out a poopy diaper in the toilet or wash or dry or fold one. He never made a meal except for perhaps cooking up some of those pig brains he bought which of course no one in the house ate but him. If I'd seen him with a broom or a vacuum cleaner, I would have passed out from the shock.
And I'm guessing that my inability to actually do nothing but watch TV or read a book comes from those times. Best to always look busy. Better to appear to be doing homework than to be reading a book for pleasure. And always, ALWAYS, best to be hidden which was impossible.

This explains so much. And if I have to be honest, I will say that it's not a bad thing to want to be productive although it's probably not the healthiest thing to always feel as if I am safest if I am alone.

But, it's the way it is. I understand the reasons and if a good garden and preserved food and dresses for my granddaughter are the result, then so be it.

Yes, I love watching Dottie's babies do grown-up chicken things but it does not escape my notice that as they go about their scratching and bug eating they have a mother who stands by constantly. Who keeps watch, even as she directs her attention to her work. And that the roosters of this crazy flock do not attack or threaten the babies but allow them to go about their business, knowing somehow that they are still young and under the care of their mother.
And...although these roosters are as horny and randy as any creature could be, none of them approaches Dottie for sex while she is in this stage of tending her babies and NONE OF THEM would even think of trying to fuck one of the babies.

No wonder I love my chickens.
I wonder if they will try to go to roost tomorrow when the eclipse is happening. That will be interesting to observe.
I'll let you know.