My walk this morning was hotter but not murderous. Not torturous. Merely uncomfortable and I am listening to an audio book by Alexander McCall Smith which I've never read before, one of the Number One Ladies Detective Agency books and somehow, I'd missed it in the series. "The Woman Who Walked in Sunshine."
If there is anything more soothing than listening to an Alexander McCall Smith book narrated by Lisette Lecat, I do not know what its, with the possible exception of listening to a Larry McMurtry book narrated by Will Patterson.

I can't help but remember that today is the birthday of my now-deceased sexual abuser. He was my stepfather, my mother's second husband. I used to make him a cake or a chocolate pie, which was his favorite, for his birthday every year. I wanted so to please him in every way and this is part of the conundrum of so much sexual abuse. It is so rarely the stranger who appears and abuses. It is far more often the well-known and beloved who carefully and strategically takes his (or her) time to gain a child's trust, her (or his) love.
And I did trust and love that man as only a little girl who had not seen her real daddy for years and who yearned for a loving daddy with all of her heart and mind could yearn.
When my mother met him, he seemed perfect in all regards. He was quiet, gentle, tall and handsome. He was working on his PhD at University of Florida as she was working on a degree in education during the summers. He owned a working orange grove. He had never been married. He was a Phi Beta Kappa. He was tidy and neat. He had ambition.
He came to visit us in Roseland as their courtship began and he courted my brother and I along with our mother. He took us fishing and on boat rides. He promised to teach us to water ski. He praised my early efforts at baking and cooking to the skies.
And he made our mother happy.
This was huge. Mother had suffered suicidal depression for years and I am not saying she did not have good reason. She did. She was a divorced woman in the early sixties when divorce was still seen as shameful. She struggled to support my brother and I, teaching school which she was not truly suited to. One of her students was run over and killed by a food delivery truck while under her watch at school. Her father, who built us a little house directly behind his was a good man but never especially warm or effusive and had told her when she married my father that she was making a mistake and not to come running to him when things went bad.
He had been right. My father was a drunkard to the worst degree and eventually, my mother had no choice but to go to her parents for help as her life and the life of my little brother and I were in danger but she didn't cave to that decision until she had suffered years of his abuse and the poverty his inability to hold a job had left them in.
And so, when she met this man who showed great interest in her and was not deterred in his affections by the two young children she had, she felt that life had finally chosen to smile on her and almost every weekend, this man came to visit and stayed in a nearby motel so that the neighbors wouldn't talk although I am sure they did anyway.
At Christmas he showed up with amazing presents including an Easy Bake oven for me. I had dreamed of having an Easy Bake oven and never, in a million years, thought I would get one.
Such a good Christmas.

And then...he disappeared. He dropped out of our lives like a shadow. No visits, no phone calls, no letters.

Mother went into another major depression. And quite frankly, I do not remember the timeline in all of this. Was he gone for a month? A year? I don't know but I know that darkness closed in again on our little family and Mother began locking herself in her bedroom again, weeping behind it as I trembled and wondered what in the world I should do. I had absolutely no one to discuss this with although I knew, even then, I should get help. But because of the relationship between my mother and me, the belief that I should protect her was already forged in steel. And if I were to talk to anyone about her weeping, her threats behind the locked door to kill herself, it would have been a betrayal which I could not risk.

I may have been about eight then. About...Owen's age.
And my brother, who does not remember any of this and who insists that it never happened at all, was about five or six.

The fact was- the man (let's call him C.) had broken my mother's heart and not insignificantly, he had broken mine too.

But that summer, when Mother went back to Gainesville she and C. remet and I do not know how or why, but they resumed their relationship and once again, all was well with the world although I do not think I ever trusted him again to the extent that I had trusted him before. Still, I was so grateful that my mother was happy again and C. not only resumed his relationship with my mother but also his courtship of me.

Phew. I have to take a deep breath, remembering those times. How much I truly did love him and wanted him to be my father. I wanted and needed a father to the very blood of my heart.
How I honestly gave him my love, my little-girl daddy-yearning love and then...how he used that. How he betrayed me and in doing so, all of us.

That's all I feel that I can write now. The sun has gone behind clouds and I may take the opportunity to pick peas and edamame. I know that either Trinky or Tronky laid an egg this morning because I saw her on the nest and when I checked after my walk, there was a nice white egg there. 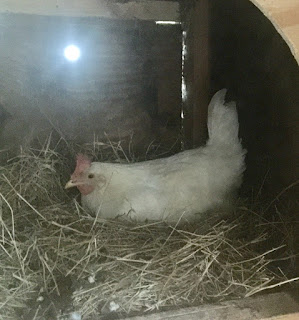 I am leaving it as incentive and indication to any other hens who may feel like laying an egg to lay there as well. Hens do like to use the same nest, probably because if one feels broody, she will sit on all of the eggs, not just her own.
That's my theory, at least.

Should I label these posts about the abuse with trigger warnings? I guess so but I have to say that the things which trigger us can sometimes be so unexpected, so mysterious.

Well. Read or don't read. I will label.

And I will also give you a quote from Gibson yesterday which made me smile and which I can't quit thinking about because it is such a very, very good question. We were in the car and out of the blue he asked, "Mom? Do aliens get affected by poison oak?" And that is the exact quote because I snatched the little notebook out of my purse and wrote it down immediately.
Thoughts?