My Babies, Part Whatever

Woke up this morning and knew I needed to get the hell out of Lloyd. Not because I wanted to but because I needed to and those are two different things. It was time.

I texted Lily and asked her what she was doing today and she said the boys needed to go shoe shopping for school and I said I'd be happy to go on that trip and she said to bring Maggie's dress because she wanted to put her in it and I said I would and then I took a walk and took a shower and drove on over to Lily's where Maggie was all ready to don her new MerMer dress. Lily had made her some pigtails and by golly, if those weren't the cutest pigtails in the history of little girls and pigtails, I don't know what are. 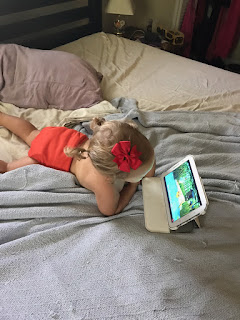 Can you see them? Her hair is a lot longer than it looks because of her curls.

The dress looked adorable on her and I think she agrees because look what she did at the shoe store. 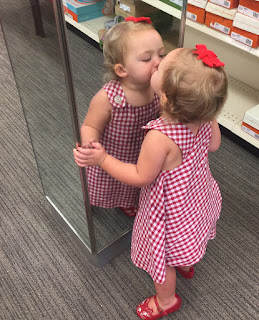 Don't nobody need to tell that child about self-love.
"Baby," she kept saying, kissing herself in the mirror. Look at those little red and white kitty-cat shoes. Can you even stand it? She took out her own pigtails, which we knew she would but she was still precious.
The boys found their shoes and I swear, I feel ten million years old because Owen got shoes that not only light up but have a control so that you can change the colors and the patterns of how they dance along the soles and they come with a charger which you can also use to charge other devices.
I am not even kidding you.
He was thrilled.
They look something like this.

At least the lights do. Damn if I can remember what the actual shoe part looked like and how could that matter? I told him that when I was a kid, I got excited about having a new cigar box to put my pencils in for the first day of school.
And I wasn't even lying.
Well, you know, times have changed and I would have loved light-up shoes.
I still sort of would, actually.
But honestly, I cannot believe that in my lifetime we've come to a place where you have to plug your shoes in before you wear them in order to get the full style-effect. It's sort of like my granddaddy seeing one of the first automobiles ever made and living long enough to see men land on the moon.
Okay. Not really. But sort of.

I'd been craving Mexican food so after our big purchases we met Hank at our favorite place, El Patron. They set out our chips and salsa and Maggie very delicately began to use her chip as a salsa delivery system. 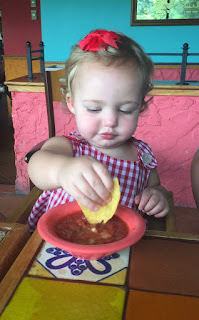 It was not long, however, before the efficiency of that technique began to disappoint her and she switched to a more direct method. 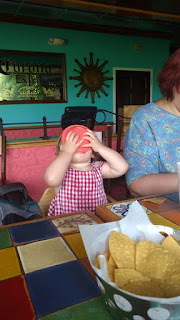 She ended up eating about three dishes of salsa.
"That's my girl!" said Lily.

After lunch we all (except for Hank) trudged through Publix where an old lady asked Gibson if he was married. I thought that was extremely funny because that's what I ask little kids too.
"Do you have a wife?" I might say. They look at me like I'm obviously insane, just as Gibson looked at this lady.
Old Person Humor. It's hysterical. At least to old people.

We drove on back to Lily's and Gibson asked us why aliens don't wear clothes and Lily and I said, "We don't know. Why don't aliens wear clothes?" thinking it was a joke, of course and Gibson said, "I don't know."
He thinks about aliens a lot, obviously.
And can you believe that in six days Gibson will be starting kindergarten?

So that was my day and I got just what I needed which was a lot of hugs and hand-holdings and kisses, too. Also, for perhaps the first time in the history of me I not only remembered my grocery list but I also got everything on it. I was so happy about today's lunch that I am going to make fajitas for supper. I got five eggs from my sweet hens and I am thinking that soon it will be time to let the babies and their mother out of the nursery coop and into the world. I hope they will be safe and that Amethyst, Pearl, and Rose will be part of the Moon flock for a long, long time.

And here, as a lagniappe, is a picture Jessie sent me today. 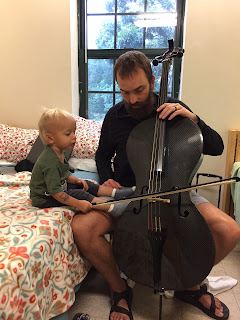 Our August! My arms ache for him. Soon. Soon he will be back and oh, won't he love the baby chicks? Won't he love his cousin Maggie? And before you know it, he'll have a new brother to love, too.
And so it goes and I may have lived a bit too long when it comes to footwear but when it comes to grandchildren, I'll take however many years I can get.