I Guess This Is Why They Call Us Survivors. Not Necessarily What You Would Think: Trigger Warning 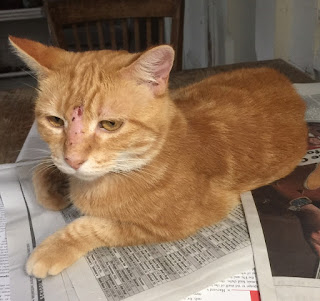 Dear old Maurice. Believe it or not, her face is looking much better now than it has looked in quite a while. Mr. Moon and I have joked that we should make her wear a battle helmet every day but of course, we do not. It seems to me that she and Jack are not quite as apt to fight as they were, although trust me- they still get into it at times. Maurice just did not want another cat in the house and Jack just did not care. He was moving in and that was that, just as Maurice had done.
Our next door neighbor asked Mr. Moon this morning if Jack was okay. She hasn't seen him in awhile. He's known as Hobo over at her place. She feeds him canned food and also, we discovered just this morning, loves to brush his fur and he loves to be brushed.
WHAT???!!!
Why in the world did he choose our house over hers?
I don't brush his damn fur nor do I give him canned food. It's Publix finest dry food for my cats and a flea collar and don't ask for anything else.
Oh, cats. Why do we love you so?
Maurice killed a mouse the other night in the fireplace of the dining room. Mr. Moon saw her do it but then she ran off with it and I found it yesterday under the kitchen island thing. It was just a small one, not one of the enormous rats she brings me. At least she tries to earn her keep. Jack does nothing but eat and sleep and cuddle with me a little before we turn out the light at night.
And I will admit that I do love that, stroking the especially soft fur of his white chest as he purrs and reaches out his paw to touch me.
Maurice still claws the shit out of me and frequently. And bites me. She thinks that means that she loves me. I understand. I tolerate it. But I don't walk by her in the kitchen when I can avoid it. She lies in wait on the kitchen island and has a reach which is far longer than you would imagine. Plus, like a Kung Fu Fighter, she moves faster than lightening.
One fast swipe before you know it and you're bleeding and all you wanted to do was put the soy sauce back in the refrigerator.

Oh well. As Hank says, cats domesticated us and not the other way around and I think it's still an ongoing process. At least in my house.

I've had a peaceful day and didn't do much but take a walk and do some ironing and a few house chores. I collected six eggs but the hens did all the work. If my calculations are correct, I may soon be getting up to ten eggs a day and another reason I'm glad that Jessie and Vergil are coming home soon is that I'll have yet another household to give them to.

I want to say that writing these posts about sexual abuse are not really upsetting me. Don't praise my bravery because I do not feel brave at all for writing them. I just feel like it's time. Now, I do definitely remember when every therapy session I went to, every meeting of the survivors' group I attended, made me feel like I was ripping the scab off a terrible, infected wound.
Honestly, that was quite possibly one of the very hardest times of my life. It was, quite frankly, horrible. A constant nightmare.
My oldest children were around nine and eleven when I realized that I had to get help and my therapist told me that it is not unusual at all for a person's defenses and crutches to cease being effective when their children reach the age they were when the abuse began. This was definitely true for me. And that therapist saved my life and those women in that group with their honesty and strength and courage and humor (yes! humor!) did too. I felt like I was being torn apart and put back together and I was crazy as a betsy bug (as my mother-in-law used to say) during those years. All of the anger and the sadness and the grief just poured out of me and I will admit, sadly, that I spilled it on everyone around me who would let me. Mr. Moon got the brunt of it and it's a miracle he's still around. I was hell to live with. And although I did not go into any details with my kids, they knew Mama wasn't right. There were many, many nights that getting a meal on the table and laundry done was tantamount to me running a marathon with one leg taped to my butt.
But I survived that. And in the midst of it, I had another baby- Jessie. So I had a thirteen year old, an eleven year old, a three year old and a newborn. I was dealing with all of those ages of children and volunteering in the classroom, and had been working at the birth center, taking call as a birth assistant. And on top of all of this, my husband was working twelve hour days.
THAT is the time when I was brave. THAT is the time when I was so much stronger than I ever knew I could be.

Now? Oh, honey. Having a whole day to myself where I can do what I want and sit down and write about something that happened over fifty years ago? That's just cake.
Okay. Maybe not cake, but it's so easy compared to those times. These are things I think about every day because they still impact my life every day. But they don't bend my days the way they used to. They do not cause me to scream and cry. They do not make me feel as if I am vomiting nails and tacks.

I did not mean to write more about it all tonight but as with all of these posts, they seem to have just been waiting for a long, long time and will have their say, irregardless of my own plans.
Not unlike these cats of mine.

But I promise you, I am absolutely fine. And no braver than I am when I walk past Maurice in the kitchen to put the soy sauce back in the refrigerator.

Thank all of you for coming along with me. I just hope that some of this is helping others to know that they are not alone and not necessarily crazy, either.
Or any crazier than circumstances would warrant.