Snapper And Okra, Dresses And Passwords 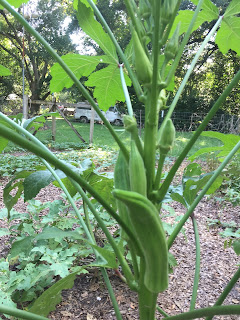 How to make a Big Mistake:

1. Lose all your passwords.
2. Don't have back-up of your passwords.
3. Allow your grandson to download a new game on the iPad.
4. When iTunes asks for your Apple password, don't remember and reset it.
5. Realize that all of your devices are now asking for your Apple password repeatedly and things are seriously AFU.
6. Google "all my devices are asking for my Apple password".
7. When all of the pages that come up for Apple support won't load, take their advice and clear all your cookies, ignoring the fact that certain things will be eliminated from your devices such as "stay logged in" stuff, meaning that you have to re-login and of course, you don't remember your passwords.
8. And so forth.

Anyway, it's been a pretty fine day except for all of that bullshit which is the very definition of first-world problems which does not preclude a certain amount of tension, frustration, and possible tears. 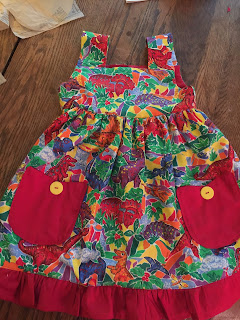 It would have been SO much better if I'd had the persistence to figure out the ruffles on the shoulder straps but life is just too short for some things. It's a perfectly imperfect dress but it is quite colorful, isn't it? I love the contrast between the funky dinosaurs and the ruffle. It's a happy dress. I feel like I'm relearning how to sew. And that feels good.

And so it goes. The boys woke up a lot earlier than I did this morning (but not as early as their Boppy who got up at 4:30 to go fishing) and were sweet and thoughtful and just came in and got the iPad (the implement of my woes) and played games on it in their bed while I continued to sleep. Finally, about 8:30 they let me know they were ready for me to get up and so I did and we had pancakes instead of French toast but that was okay. Owen helped me make the pancake batter.
I forced them to help me make their bed and they did a good job with that today and Gibson even got into smoothing out the wrinkles. They're such funny little boys. Owen had brought a stuffed Pooh pillow for me to stitch up where it had come unsewn and I did that for him. He was grateful. And when Lily came to pick them up, Maggie gave me many, many kisses and I gave her a pancake.

Mr. Moon caught red snapper today and has filleted it and I am about to go fry some up. I'm sure he's exhausted. He said they had to hang out on Dog Island for awhile before they went offshore because of a huge storm and of course we didn't get a drop of it. I hear the lightening on the way down to the coast was tremendous.

The AC has not quit running for days and still can't keep up with the heat which has kept me out of the garden. I did manage to get my lazy ass out there this afternoon to find that the okra had grown to inedible proportions in the past three days (see picture above) but I did manage to cut some that we can eat. I did not even look at the field peas.
I...just...can't.
Maybe tomorrow.
I need to dig up sweet potatoes which I did not plant this year but which are flourishing from whatever I left in the ground last summer. Even if I only get enough for two meals, it will be thrilling.

I think that tomorrow I may start another Maggie dress, another of the criss-crossed back strap sundresses if I can find some stashed fabric in my sewing dresser. Maybe the blue eyelet material with some of my Virgin of Guadalupe fabric as a lining. She could wear it to church!

Don't forget to back-up your password list. I hear there's an app for that. I need to use it.