I had a panic attack this morning. I think it was a panic attack. An anxiety attack?
I don't know. Just out of the blue came a whoosh through me and my mind went a bit out there and my heart raced and a few other physical things happened but I was able to continue with getting ready to go to Lily's and so I did.
I got dressed and put in earrings and kept taking deep breaths and remembered the last time this had happened after I went to an appointment at my former care provider's and how I'd had to call my husband to come and hold my hand but I didn't feel as if this whatever-it-was was really that bad and so I took an Ativan and carefully drove to Lily's and felt pretty fine.
By the time we got to Melissa's I felt normal and tried to entertain Magnolia while the boys got their school hair cuts.
Here's that little girl sitting on a bench in the little piece of garden next to Melissa's salon. 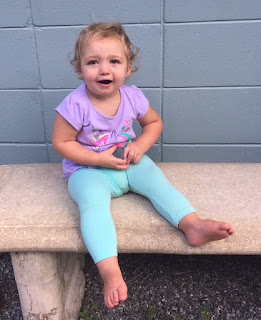 She was collecting rocks which she would then take inside to show her mommy.

Owen went first in the chair. 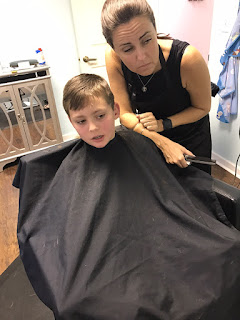 Here he is describing to Miss Melissa (which is what Gibson calls her) what he wanted. He still wanted the rat tail but he wanted his hair short on top with a stripe-design cut into the sides. And so Melissa gave him exactly what he wanted and he looks tidy and yet daring, Republican and yet oh-so-definitely not.
He was happy with the results.
Then Gibson got in the chair. He wanted the rat tail off and oh, maybe a MOHAWK!
Well, he did not end up with a Mohawk but he did get his rat tail cut off and everything cleaned up and trimmed and he was, as you can see, quite happy. 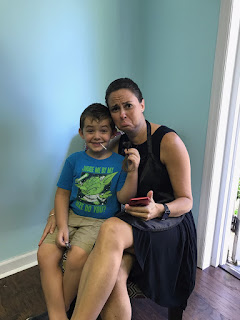 But Melissa was so sad. See?

I can't even tell you how much we love that woman. Lauren, Lily's friend who came with us today has had her hair cut by Melissa and now won't even consider going to anyone else. To know Melissa is to love her whether you are five or sixty-three.
She was happy about getting eggs from me. She's a country girl from Alabama and when I told Gibson that he looked so handsome I would marry him and he said, "You can't marry anyone in your family," Melissa said, "You can in Alabama! No problem!"

So that was all fun and we went on to Japanica! and we all ordered what we always order. The boys and Lily get sushi and I get the Bento Box with green curry tofu and Lauren, who had never been there before got sushi too. We ate our delicious soups and salads and for once I remembered to take a picture of what my meal looked like. 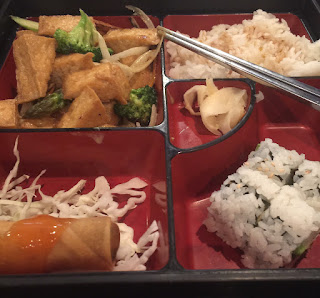 It's always a little bit different, depending on who's doing the cooking and what vegetables they have most at hand. Today my tofu was only mildly spicy and I think I detected some coconut milk in there and there was broccoli and asparagus and onions and something else. Not sure. But it was SO good. Maggie helped me eat my rice and tofu but I ate all of my own sushi and my spring roll (is that a spring roll?) with no help and I loved every bite. The boys ate massive amounts of salad and miso soup and sushi and Lauren was amazed at how good it all was. 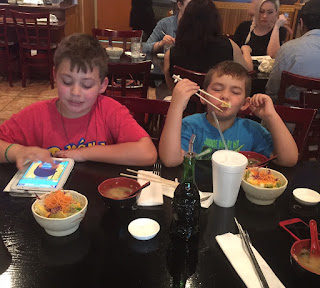 Japanica! never disappoints us! And Owen did put the tablet away right after this picture was taken.

After lunch we walked down to the Goodwill bookstore where books and a Play Dough Town Factory were purchased. Gibson was using his manners and whenever he had a question for an employee, he would say, "Excuse me sir!" or "Miss" as the case may be. We told him to use the word M'am instead of Miss but we also told him we were very proud of his good manners.
Then we had to go to Publix and Owen shopped with me, helping me to make decisions and we discussed various foods as we went. He's growing up so very, very fast. He hugged me hard in the cheese aisle and it me both so proud I could have died with the sweetness at the same time I was grieving the little one he used to be.

After we did our shopping and I left Lily's house, I came home and stopped at the Post Office to find that Owen's new Rolling Stones shirt that I ordered him had arrived. He's outgrown his old one. 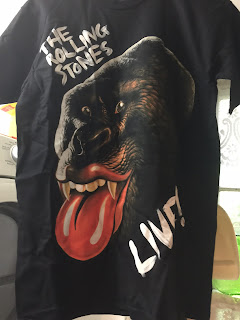 It's so fierce! I love it! I hope he likes it too. It's almost just like his old one so he probably will.

After I got home and unloaded everything and put all the groceries away, I put the clean sheets in the dryer and went out and filled up two chicken feeders and a waterer and spread a bit more feed on the ground for the baby chickens and Dottie and Trixie. By my HEY!-I-TOOK-TRIG calculations, it would appear that Rose and Pearl and Amethyst are four weeks and a few days old and I think I'm going to let them out of the coop tomorrow if they want to go. I know they're still little but they can fly if they have to and Dottie will do her best to keep them, quite literally, in line and will call them in if they are in any danger. I am not sure how a mother hen calculates the time she spends constantly watching over her chicks but if I know it's limited. One day she'll still be protecting them with every feather on her body, every claw on her feet, every beak on her beak and the next day she'll be like, "Buh-Bye! Love ya! Have a good life!"
And I want her to be able to teach them what they need to know in the big world outside the coop before that day happens.
Mr. Moon will grumble and tell me it's too early and I'm not saying he's wrong.
I'm just saying that I think it's time and I know from experience that for quite awhile, Mama won't lead them too far from the safety of the coop and will keep them in the spiny underbrush where it's doubtful that a hawk or an owl could get a clean path to snatch one.
Well, let's hope I'm not mea-culpa-ing by this time tomorrow and that all is well. At least with four roosters around, all big strong guys seem to care about the flock, there's an excellent alarm system in place and I just need to pay attention. I don't plan to leave Lloyd again for the entire weekend. I have plenty to do in the garden and in the library where I did a little more sorting and arranging this afternoon and I am getting itchy to cut out a new dress for Magnolia.
I am finding myself in the library not only willing but eager to get rid of a lot of books. Honestly, I think I could probably limit myself to less than a hundred and be happy. Of course I'll never get rid of certain books, some due to their ancient roles in my life, some due to the fact that I need to read them over and over, some due to memories and emotions I have attached to them. The books that I rub my fingers over, crack open and hold their faces up to mine and take a deep inhale and time trip back to other times, other places, other me's.

The rest? Oh, Lord. I have books on gardening and birds and wildflowers and on sea life and on maternal/infant health care and on John and Yoko and on Cozumel and Belize and Costa Rica. I have books of poems and anthologies of great American writers and great Latin American writers and great Southern writers and probably all of Shakespeare. I have books of poems and I have books by MFK Fisher and about MFK Fisher. I have books on the history of Florida and various, specific towns in it. I have a typewriting manual from the 1940's and a book on childcare from the 1920s. I have the original printing of Spiritual Midwifery and and I have books on hippie homes, Key West Homes, communes, and hippies. I have science fiction and I have The Boxcar Children. I probably have three copies of A Kiss For Little Bear. I have books about how to write books. I have books of poetry and books of photography. I have books about how to eat, how to meditate, how to do yoga, how to breathe, how to see, how to crochet, knit, embroider and how to be mindful when one is doing all of these things. I have Mark Twain and Tom Robbins. I have Robert Heinlein and I have Ray Bradbury. I have The Wind In The Willows and the most beautiful edition of the Wizard of Oz you are ever likely to see. I have a family Bible which is bigger than some kitchen counters I have created Thanksgiving dinners for thirty on. I have a copy of an art book of famous paintings that fueled the fire of my imagination throughout my entire childhood.
I have almost everything Larry McMurtry has ever written.
I have books by the beats, about the Beatles, and Lord knows I have Life by Keith Richards. I have a book about Mick Jagger whose only worth is in the pictures.
I have books I have read and reread my entire life. I have books I've never read. I have books that I've bought brand new at retail, books I've bought previously-read at thrift stores, and I have a book about animal-human communication. I have books that were autographed by the author who used to live in this house. I found a book that Lily wrote when she was in elementary school, dedicated to her sister, Jessie Moon.
I have all of these and so much more.
And to tell you the truth, I could give almost all of them up.

Not, however, my original copy of Little Women which my grandmother gave me and which I still have and if it is tucked in beside me on my deathbed, that will be fine and lovely.
Also, the book Hitty, Her First Hundred Years, which is the only thing I have of substance which belonged to my biological father. 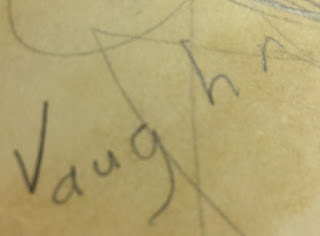 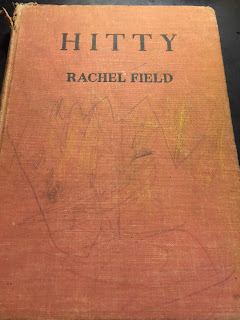 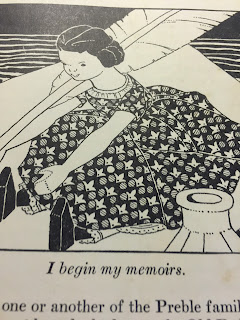 I have all of this and so much more.

I'm doing the best I can.