We Should All Be Sun Worshippers Here is what Magnolia June looks like striding across a lawn in her dinosaur dress. I have realized that because of the way I did the gathering for the skirt part before I attached it to the bodice, the pockets are a bit wonky but she certainly does not care. She looked adorable in it. Her mother and I accompanied her to Joanne's Fabrics today so that I could buy new fabric to make her another dress and flannel to make the next new baby a quilt. I have taken to calling him "King Richard" because, of course, that is Gibson's name suggestion. I feel quite certain that he will not be named King Richard but I like calling him that now.
His quilt is going to have llamas on it. A kingly animal, of course.
I hope I bought enough fabric to perhaps make a few sleeper gowns for him too. Lily said today, "So. Sewing is your new addiction isn't it?"
I paused and said, "Yeah. I guess it is."

I'm going to have to take a break in the sewing though because look what Mr. Moon brought home tonight: 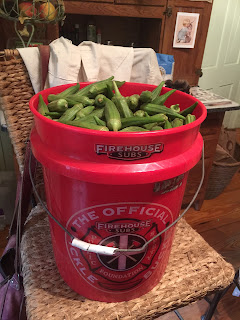 There's a man who lives down the road who keeps goats and guinea hens and I don't know what all and obviously grows okra. He brought that whole dang huge bucketful of okra to Mr. Moon at his office and charged him 12 dollars for it. He had told me that he was getting a bunch of okra for me to pickle so I bought another case of canning jars and more vinegar and dill seed and mustard seed but damn! That's a lot of okra! It would be worth it to pickle it all though because it's so delicious. So I know what I'm doing tomorrow. And you know that nothing could make me happier unless I'd grown the okra myself. I have at least a gallon bag of the rocket-shaped vegetable in my refrigerator which I did grow and I'll pickle those too.

This afternoon I blanched and iced and then froze three more quart-sized bags of field peas and it's so nice to have the freezer filling up with those. They're going to taste so good this winter. I was watching TV the other day while I sewed the buttons on Maggie's dress and there was a commercial for some sort of processed granola bar which showed people running up a mountain at an obviously suicidal pace and then stopping to rip open an aforementioned granola bar with the voice-over intoning, "Nature's harvest of energy from the sun!" or some bullshit like that and I thought, "Well, fuck, what isn't?"
From asparagus to zucchini, everything we eat wouldn't exist without the sun, up to and including meat whose donor animals get their sustenance from the plants they eat. And it's nice to have food in the freezer that I myself have harvested from the energy of the sun.
Even the venison we eat, the eggs we consume all, ultimately, get their energy from the sun and that's just the way of it.
And thus, so do we.
Duh.
We are stardust, we are golden, and we live on sunlight which has been chemically altered into food that we can eat.

Well, that's all I have to say tonight.

We shall continue the conversation tomorrow in whatever form it may take.