Dottie Is Ranging Far Afield. I Am Not 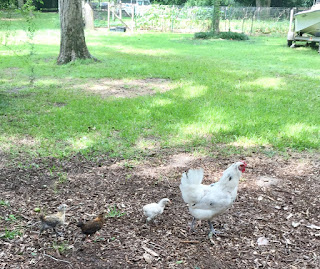 Well, dang, Dottie!
Within an hour of me opening up the door to the coop, Dottie was leading her chicks to scratch all the way up by the house. 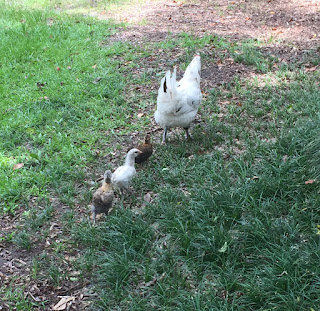 "Come along, children!" she clucked. "We are going to eat well today!" 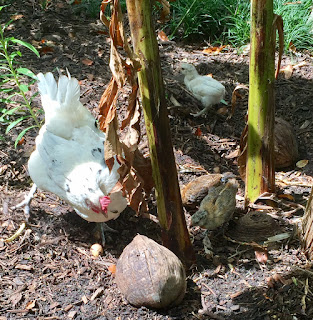 And then she proceeded to take them into the little garden off the kitchen where they happily scratched around beneath the bananas where I throw kitchen scraps.

So much for my theory that she'd stay near the coop with the babes on their first day out.
I think she's been desperate to get out and scratch. That coop is boring and does not offer much in the way of good foraging. I've tried to give them fresh fruit and greens every day but that's not real life in chicken world. That's just a poor substitute.

Let us hope for the best. So far none of the other chickens seem to be paying them much attention and Jack observed them but made no moves toward them.
He better not. She'll beak his eyeballs out.

So. That's the excitement here in Lloyd today so far. I'm enjoying being thoroughly leisurely and have enjoyed some huevos rancheros made with leftover refried black beans. I may never need to eat again.

I think I'll go pick edamames and peas if I can tolerate the heat. It's definitely the time of year for the garden to die down, die back.
Meanwhile, in Charlottesville, there is an evil growing which challenges the devil himself.
If there were ever any question about whether we have completely abandoned the garden of eden and planted the seeds of destruction, we can now see the proof in the fruits which are being harvested without shame.

I am staying here with my chickens. I am hiding my head in the sand. I am afraid for us all and for this planet which, on its own, is so wild and so tender, so harsh and so hospitable, so blue and so green and so precious and unique.

The mad men rage and are in charge. Men who do not have the sense or even the native intelligence of a mother hen have the power to destroy us and the planet.

How have we let this happen?
How?