Such A Tiny Life 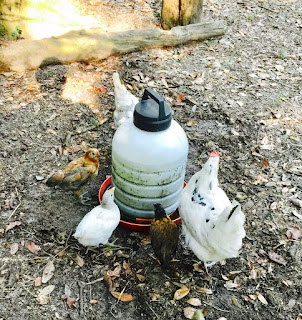 I think I took that picture yesterday. Amethyst and Rose are so well camouflaged that it's hard to get a picture of them where you can actually see them. Pearl, of course, is easy to see as is Dottie, the devoted mother. But there they are, sipping water before they start on their day's adventure. This afternoon I heard a hawk calling and went out to find Joe Cocker with Dottie, the chicks, and another hen in the brush back by the railroad tracks which is where I heard the hawk.
"Get back to the coop!" I told Dottie. Both Joe and Mick (who was in the coop) were raising hell. By the time I got out there, the hawk was gone and I hope it was dissuaded from chick-taking by the thick bushy brush. A full-grown hawk can take a small hen and a half-grown one would be naught but a morsel for a hungry hawk, albeit a tasty morsel and certainly big enough to mess with. I would hate like hell to lose one of these chicks at this point. Dottie has worked so hard, keeping them alive and well.

I've been anxious all day long. I won't go into why but I will say that it involved a dream (of course) and then Mr. Moon not telling me all day long via text that he loves me which is most unusual.
Yes. After thirty three years together, I still worry terribly that he is suddenly going to stop loving me.

No one ever said I wasn't crazy.

But he came home and reassured me that he does and I feel better now. Also, I just saw Dottie and her three grazing in the back yard and oh! now they're all sitting on the fence! It's so funny watching chickens fly. They certainly can but only do it when they really, really want to get up somewhere high. All of the chickens seem to like to sit on the fence in front of the coop before they go to roost. I really don't know why they do this but maybe they just like to take in the view before bedtime. I would not put it past them.

I went to Costco today with Jessie and August. Good Lord, but that child charms me! He wanted some of the blackberries his mama had put in the cart and he kept holding up his index finger on both hands saying, "One, two!" 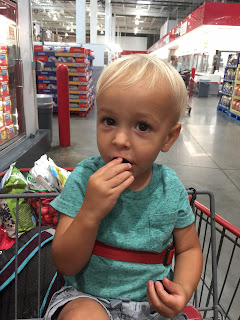 Here he is with two blackberries.
When we left the store he waved good-bye to everyone as if he were blessing them like the royalty he is. I hear that he after his nap, he went to visit his Boppa at his office in the bank where this picture was taken. 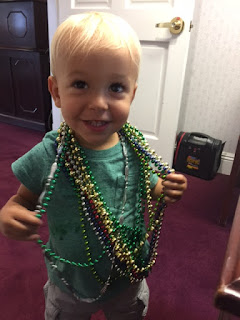 And in Amazing News You Can Hardly Believe, I have finished Maggie's dress except for a little bit of handwork I need to do. 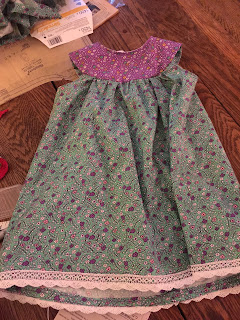 When I tell you that I have had more trouble with this dress than the prom dress I made from a Vogue wedding dress pattern in high school (and it was gorgeous!) I am not lying.
Oh well. Just one more homemade cotton dress for the Woman Baby and yes, I'll be making matching bloomers too. Those will take about fifteen minutes.

And having said all of this, it occurs to me that I should probably be talking about the horrible flooding in Houston, the loss of life and homes and property. Not to mention the death and devastation going on in other parts of the world which continues apace, as it does. In fact, I feel ashamed. But what am I going to do about any of that?
Not much, is the answer.
And so I sit here and live my life and am grateful for it. A life where roosters and gingham have meaning. And I wish I didn't feel so guilty about that.

Ellen Abbott, may the waters recede and your house stay dry.