I'd Say I'm Not Complaining But I Am

I have to say this is NOT my favorite time of year. The heat has oppressed me to my limit. No matter how careful I try to be, I am constantly running into spider webs. The chickens are beginning to molt. Mick is already down to one tail feather. Going out and trying to work in the garden is hellish torture between the biting bugs and the heat. Every day my weather widget says that it will rain tomorrow.
Tomorrow never comes.
My last stretch of walk between Lloyd Subdivision Road and the post office looks like a strip of surface-of-the-sun burning agony and it feels that way too. Sometimes I have to disassociate so hard that when I get home I can barely remember anything from my miles. For about a week I simply said, hell no, and did not bother but yesterday I knew that foolishness had to end and if I walk tomorrow it will have been three days this week that I did.

I have the last five pints of okra I'm pickling in the canner right now. I have seven pints cooling and sealing on a towel on the counter and that is all of the okra I'm pickling this year and that's a promise. A lot of you have asked about okra and the slime factor. It is true that okra can be slimy. Really, really slimy. I knew a man who said that he would not eat okra because he would not eat anything that he could not control in his mouth. But, if you cook it certain ways, or pickle it, it is not slimy. If you cook it with tomatoes, somehow the slime magically mostly disappears. And if you fry it, it entirely disappears. And pickled okra is crisp and lovely with no mucous-like tendencies.
I know, I know- none of this makes okra sound like your favorite vegetable but please trust me that if cooked properly, it is one of the most delicious things on earth. I will admit that fried okra, especially, is one fried food that I rarely pass up if it's available. We eat it with ketchup. Sometimes I "fry" it in the oven and that's fine but it sure isn't as good as what you get in a restaurant that knows how to deep fry. But okra and tomatoes is a very fine dish as well. I cook mine with onions and soy sauce and we enjoy it tremendously.

On to chickens. I went into the hen house this morning after I hung the clothes to see if anyone had laid an egg, only to find Dottie on the nest. The little mama hasn't been on the nest since she sat on her eggs and hasn't laid an egg since she started that process. She certainly laid one today. I wondered where her babies were as they were nowhere in sight.
"Where are your children, Dottie?" I asked her but she did not answer. However she had a bit of an anxious expression on her dinosaur face. I knew she must have stashed them somewhere safe and told them to stay there until she came and collected them and when I got back from my walk, they were all together again, scratching merrily away.
Don't tell me chickens can't talk to each other because I know they can. And it amazes me that the young ones did what their mother said to do, which was to lay low until she came to get them. Very well behaved young'uns and I'm impressed.

I went into town today and made a day of it as I ran my errands. I went to a consignment shop and got some sweet little long-sleeved onesies for Baby King Richard as well as a little preppy outfit with madras pants and a polo shirt. It's so darn cute. I also bought myself a falafel pita because I have been craving falafel and it's not something I'm likely to make at home. It was good. I also went to Publix and while I was there, Jason came in with the kids because Lily was working. So I got to see all of those people. Maggie was wearing her Virgin of Guadalupe dress and she was so excited to see me. She held her cookie out for me to admire, which I did, and then she leaned her head on me, which is just incredibly endearing. Owen and Gibson hugged me and asked, "What are YOU doing here?" even though I had a cart-full of groceries. I imagine that they tend to believe I spend all of my time when I'm not with them simply sitting somewhere quietly, waiting to see them again. This is not an unreasonable assumption and it reminds me of how little kids tend to think that their teachers have absolutely no life outside of the classroom and probably sleep there at night, curled up contentedly on their desks.

So that's been my day and I am worried to pieces about Texas and this damn storm heading their way. Harvey looks to be a really bad hurricane and even as I am grateful that it's not heading this way, I feel terrible for the people in its path. A hurricane of that size is no joke. Coincidentally, I saw my first hurricane lily of the season today, growing across the street in my neighbor's yard. Mine will be popping up soon. Hurricanes are another reason that this is not my favorite season. Add those damn tormenters to the general weariness from the heat and the humidity and the insects and you get a toxic brew of complete ennui and adrenaline-fueled fear.

"Kill me now," you sort of think to yourself, even as you obsessively check the tropical weather forecast. 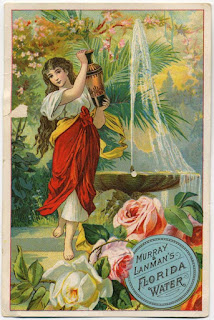 and discovered instead a sweltering heat, snakes, every sort of biting insect, bears, panthers, hurricanes, and also winters where it actually snowed and killed their tenderly planted and tended orange groves and I know exactly why we are known here as being generically insane.
We had to be to survive and stay.

Steve Reed, I stole that image from you. Thank you.