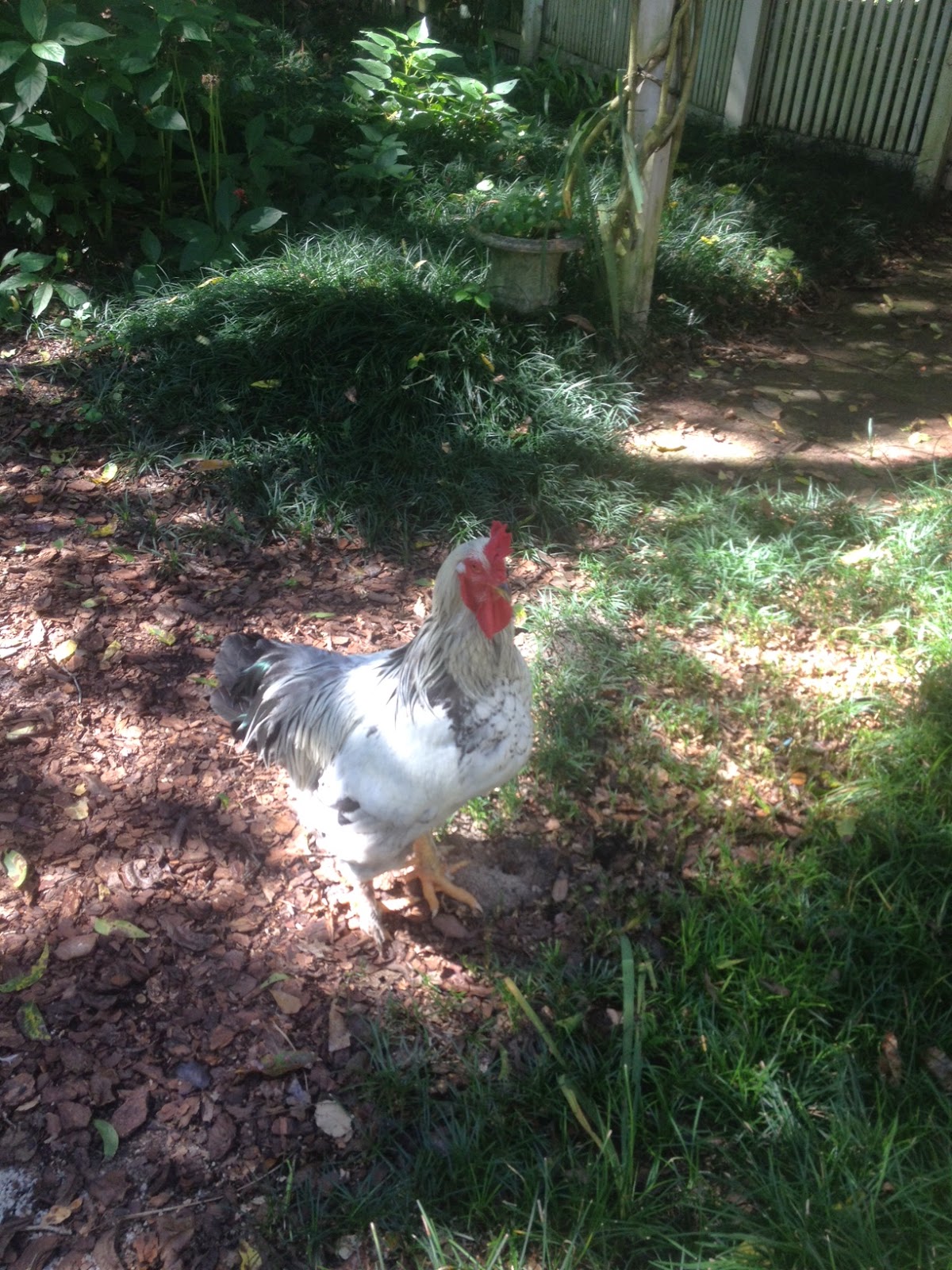 It has been the most absolutely beautiful day I can remember. I spent a great deal of time just sitting on the back porch steps watching the birds and the way the light and shadows changed. Maurice sat with me and I felt as content and peaceful as a cat myself. Not lazy, just not bothered enough by anything in this world to do a damn thing. Elvis came up and demanded treats but I didn't give him any. He has lost his last tail feather and thus, his magnificence is a bit dimmed but he is still a handsome lad, don't you think?
I remember once, before we moved in here but after we'd bought the place and I came over to clean one day and it was March, I think, and the weather was much like it was today and I was so happy, so filled with the wonder of knowing I was going to be moving into this house and I walked down to what was then the open little convenience store owned by Mr. Lawrence and his wife and I talked to them a bit and told them who I was and I bought a six-pack of beer and came back here and sat on the steps and drank one, just completely blissed-out.
Here I am, ten years later, still sitting on those steps, still feeling blissed-out.

I saw Mr. Lawrence a few weeks ago. He'd come over to mow the grass around his building which is now empty and falling-in and sad. He and his wife closed the doors a few years ago. They were helping with a niece who had to have a liver transplant, I think, and it was all getting to be too much for him. I stopped to talk to him and he did not look very well. He said that he'd had some health problems but the doctor assured him that it was "all behind" him now. And that he and wife were planning on reopening at some point.
I don't know if that'll happen. He's got to be eighty, although he doesn't look it. It sure would be wonderful if it did happen. We miss that little store, not only because it was so easy to run down there and get a quart of milk or a six pack, but because it was a place to get the news, to have a chat.
Mr. Lawrence asked about my husband. He calls him "The Fisherman" and about my grandson and I asked about his bride. "She's as mean as ever," he said.
"She needs to be to take care of you," I said, and we both laughed.
He used to tolerate no nonsense, that man. He had a shotgun behind the counter which you could not see and a framed picture of him and Bill Clinton together which you could see. One of them, and I can't remember which, was holding a saxophone. And Mr. Lawrence was wearing a bad-ass baby-blue suit and a ruffled shirt.
Yes. I miss him. I'm not the only one. He told me that day that since he'd been there an hour or so before, at least ten people had stopped to talk to him, tell him how much they missed him.
Everyone always called him "Israel" which is his name, but I always called him (and still do), Mr. Lawrence.
A community needs that sort of a place, that sort of a man to run it.
If he was still here, I'd take the boys down when they're with me and let them pick out a piece of candy. It would be a damn big deal in our days.

A few of the birds have found the feeders, one female cardinal in particular who has been chipping about it all day long. I put a neon-pink elastic collar with a bell on Maurice today. She rolled around and tried to get rid of it for about five minutes but now she seems almost proud of it. I don't know if it'll do any good to prevent bird murder but at least I've done it. And I'm going to go buy more bells and sew them onto the collar too so that she'll jingle like a belly dancer when she walks. I'll have to take it off at night because the last thing we need is a jingling cat at two a.m.

And now it's time to listen to Prairie Home Companion and I'm going to make a vegetarian shepherd's pie and did you know that one of Keith Richard's favorite foods is a good shepherd's pie and that he won't start playing a show until there's one backstage which he does not eat until after the gig, or least that's the way it used to be? I'm sure his shepherd's pies aren't vegetarian but ours tonight will be. We may be on vacation but let's not be ridiculous with the red meat. Mr. Moon is comfortable in his chair watching football and I've got The Duck out on the bed and and I can't wait until he sees it and calls it That Damned Thing and then he'll laugh and I bet Maurice will spend the whole night, sunk into its depths beside me.

Just about a perfect day.

I am so glad to be able to report about it. I am even happier to be living it.