Can We Laugh About It?

It's nice and chilly but not cold and I've found my slippers and that damn Maurice- I thought she slept on me all night long but noooo...
This morning the first thing when I got up, Mr. Moon told me about their nighttime romance. How she came and kissed him and then cuddled with him and is my jealousy directed at the cat or the man?
Neither too badly.
He loves to pretend that he does not like the cat but he doesn't pretend very hard. He is fooling neither me nor Maurice.

Yesterday I read the headline of some stupid article on Huffpost to him which went something like, "70% of married women have a back-up husband in mind" or maybe it was 50%. Whatever.
"Mmmm..." I mused. "Maybe I should have one of those."
"I'll pick you out one," he said.
"And who would that be?" I asked. And then I said the name of a friend of ours who, although he is a darling and precious soul, I wouldn't marry if he was the last human being on earth or even the last primate.
We laughed. That was that.
But last night as we were watching Anthony Bourdain on the TV, he said to me, "You can marry him if I die," which I thought was about the sweetest thing in the world because he knows I have a little crush on Anthony and also, Anthony is a tall guy like him and although the odds of that ever happening are somewhere right up there with me being killed by a piece of burning space debris, I loved him for saying that.
I should have told him that if I die, he has my permission to marry Salma Hayek because I know he has a huge crush on her. I do too, but then again, who doesn't?

One of the things I love most about our relationship is the fact that when we spend time together, really spend time together, not just exist in the same space which is what a great deal of life is like, we laugh a lot. We make each other laugh and I think that's a vastly underrated part of long-time love. We share jokes and silly memories and the punch lines that come from those and it's a sweet, sweet sharing. Other things in a relationship are very important too. Physical closeness and intimacy and shared values and respect and family and so forth but humor- that's a good one.

And pancakes, of course.

This morning I'm making what should be the Best Pancakes Ever because they have sweet potatoes and banana and apple and pecan in them but I swear to you- I can't get the pan right and they're all wonkey and either a little burned or a just a damn mess. 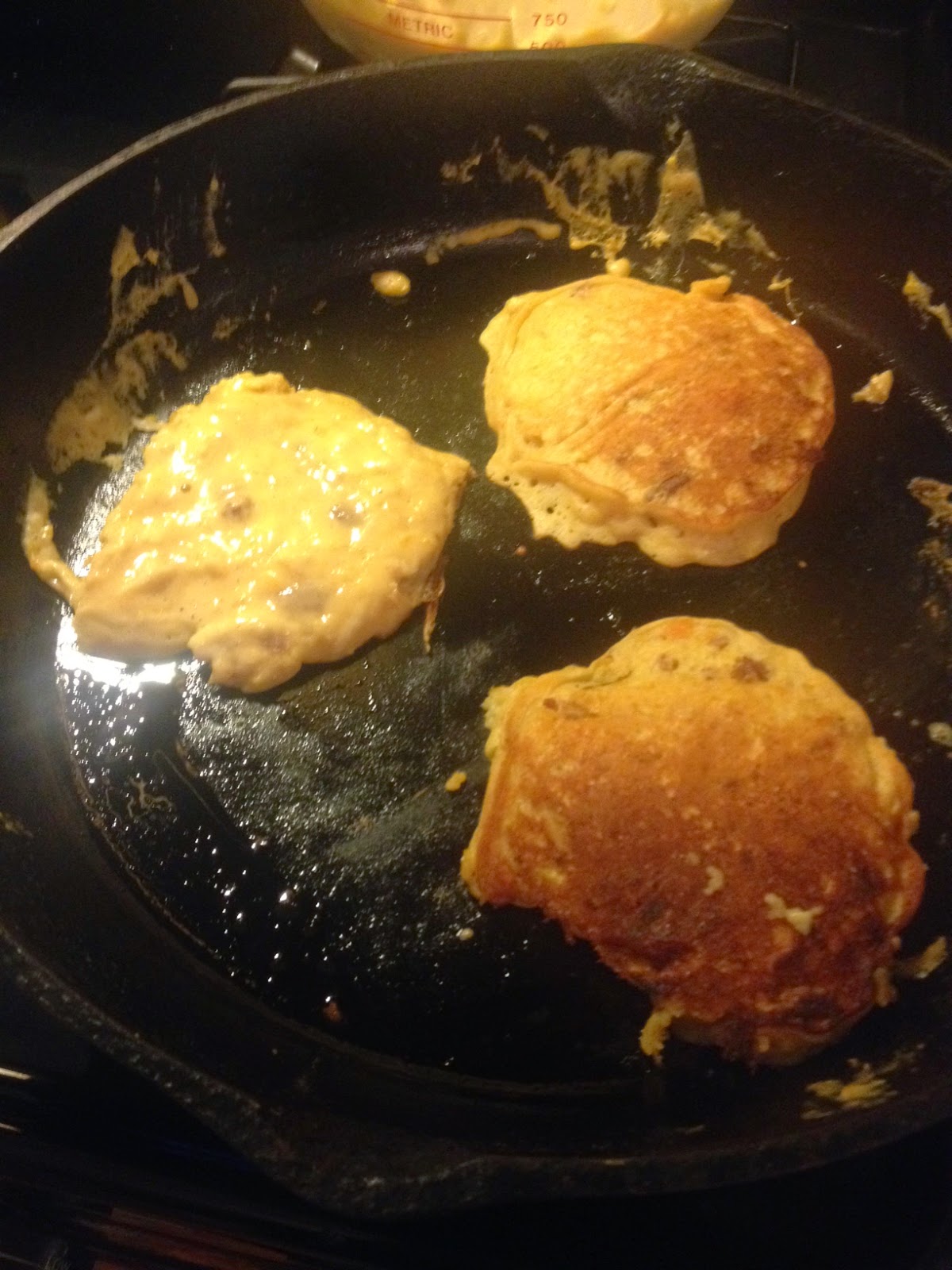 Oh well. He'll eat them and he'll like them. I promise you. And we may even bring up the joke which is not even ours, but was a story that my grandfather used to tell from the early days of his marriage to my grandmother.
When they were first wed, she couldn't cook a damn thing. She was the darling spoiled baby of a family with ten children and she always burned the toast. But he, being a loving husband, told her that it was fine, that was just how he liked it.
So once, when they went off on some sort of trip, they were at a restaurant for breakfast and the toast came out burnt. The server offered to take it back to the kitchen but my grandmother said, "Oh, that's okay. That's exactly how he likes it!"

This story never ceases to amuse us, as silly as it is. I think it is a gentle and loving story as well as a funny one.

I never remember my mother and stepfather sharing this sort of thing. His attempts at humor were cutting and mean or over-laden with inappropriate sexual innuendo. I don't remember any genuine sweetness or silliness. I remember the fear of saying the wrong thing, the cruelty of his words and actions. The threat of his anger. Not much room for laughter in that.

I have no idea how I escaped such a similar fate in my own marriage but I certainly have. There is no cruelty at all in my husband. There is, instead, his gentleness, his ability to laugh at himself and with me over our foibles. We are both losing our hearing and the other day he said, "Maybe we should get two sets of hearing aids," after I didn't hear him say something and I said, "Maybe we should."
"Nah," he said. "Let's just keep doing what we're doing and laughing about it."

Oh god. As long as we can laugh we'll be all right.

Well, the morning has passed. The pancakes were indeed pronounced "the best ever" and eaten with pleasure. My husband is out cleaning up the old convertible and I think we're going to take it down somewhere near the coast and maybe have a few oysters on this beautiful fall day. I just got off the phone with May and we laughed a lot too. We're the laughing family. And yeah, we cry too but mostly from sweetness.

Happy Sunday, y'all. For once, it really is one here and I am not disregarding the joy in that.