It's very misty here this morning and a pileated woodpecker is thunking into a dead limb on the chinaberry tree, working away.

I'm nervous this morning. Which is different from anxious. Nervous is normal and understandable. Okay, there's a little anxiety too. My doctor sent in a prescription for two Xanax for me, one to take the night before, one to take an hour before the procedure. I did not take the one last night. I figured I'd sleep okay and I did. But you can bet your bottom dollar that I'll be taking one before I go in.
Amen and yes, m'am.

I can eat up to three hours before but of course, I don't feel like eating. Drinking a smoothie.

You'd think I was the only person in the world to ever get a dental implant. At least if I was getting breast implants I'd have something to really look forward to. Probably cheaper than a dental implant too. Not that I'd know.

Jessie called me last night after she got off work. She does that a lot, gets off work, calls her mama. Such a sweetness. Last night she was crying a little bit though. It had been her last day of work at Mission hospital. They'd thrown her a party in the break room. "They made a CHEESE BALL!" she told me, laughing through her tears. Here's a picture she posted on Facebook. 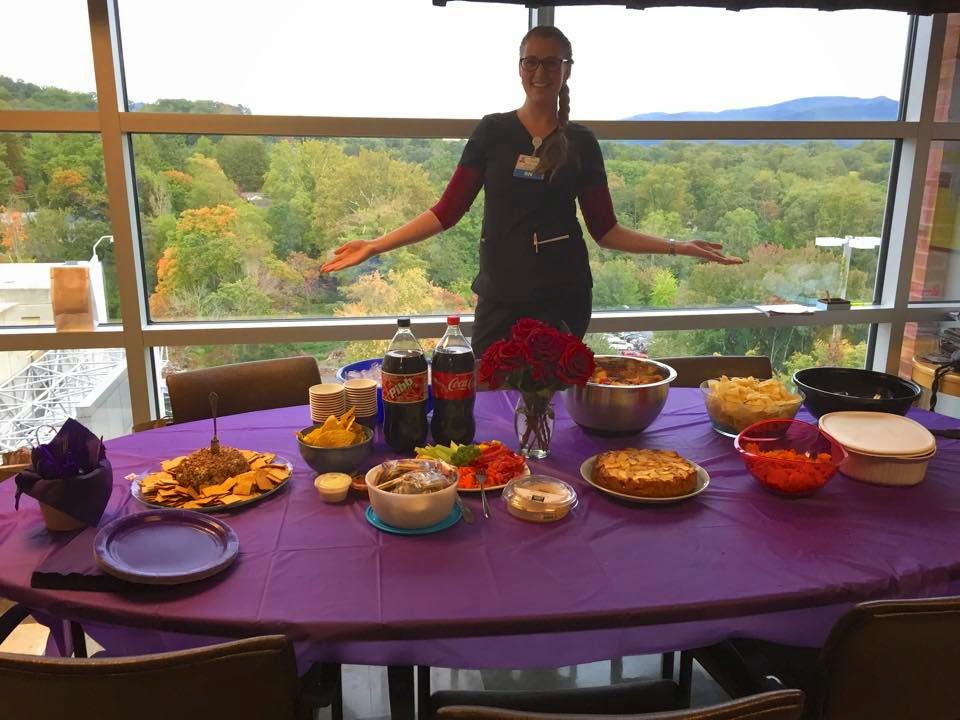 Would you look at the size of that cheese ball?
And the view from that break room? She's never going to have a view like that from a break room in Tallahassee. Jeez. No wonder she was crying. But what she was really crying about was having to leave the women she's been working with. A team of nurses truly is a team. And she's had the joy of working with such a good one and I know they're going to miss her as much as she's going to miss them.

Okay. I just ate an English muffin. That's going to do me. I'm going to clean out the hen house because it needs it. It's pretty shitty in there. Thirteen full-grown chickens will just poop more than six chickens and that's a fact of nature and science. We found a little chicken poop by the couch in the Glen Den last night so I guess Nicey and Lucille were exploring that room while I was gone. I keep visualizing them as being like a little pair of Goldilocks, you know?
"Hey! Check out this couch! Man, this is nice. Here, I'll scoot over. Hand me the remote."

Talk to you later.