This Is Turning Into A Newsletter


First off, I took down the post of the embedded video of Roseanne on Chelsea Lately because every time you came to my blog, that damn thing played an advertisement and I'm not getting any revenues from it so screw that.

I got an e-mail from my brother whose picture I so rudely posted here.
The e-mail said this:

I noticed you didn't-take a single picture of me when I was at your house on May first..why? But you show that funny picture on your blog? It wasn't that funny to me..but I dig the glasses

Well, he's right. So in the spirit of fairness, here's two pictures of my brother as he is all grown-up without the glasses. He shed those puppies as soon as he got his braces off and has worn contacts mostly since then. 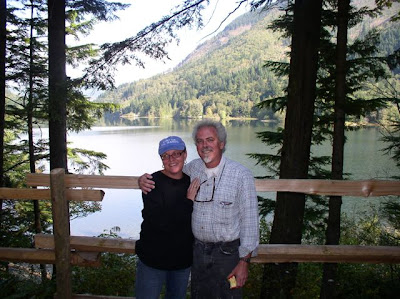 This is my brother White and me back about five years ago? I can't remember. Anyway, Mr. Moon and I had gone out west and did a road trip which was fabulous and ended up on the Pacific Coast right beneath Canada which is where my brother lives.

And here's a picture of White at Jessie's graduation this year: 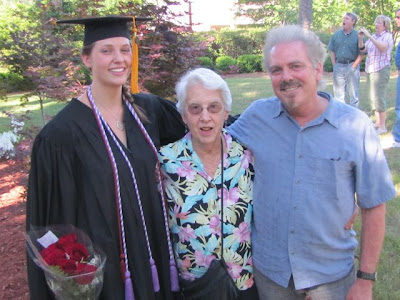 Fair is fair. White is NOT the little dork he once was and Lord Have Mercy, neither am I. I may be old and wrinkled and ugly but I am NOT a dork. I used to be. Oh yeah. Believe me. I was the dorkiest female dork on the planet. I have pictures to prove that too. Maybe I'll show you some one of these days.
I ain't proud.

So yesterday when I was in the Goodwill, a woman recognized me from the blog. It was odd! She said, "Are you Mary Moon?" and I said, "Yes." And then I think I may have actually said, "Do I know you?" Because you know I have that face recognition issue and so I may know someone but not recognize them but no, she recognized me from my blog and all I could think of to say was, "Well then you know a lot about me," which is true and for a second, I felt EXTREMELY vulnerable, not in the way where you think someone is going to shoot you, but still. She was very friendly, though, and sweet, and I got all shy and started channeling a former friend who is like the Very Princess of Southern Girl Sweetness which is not really like me at all but hell- that's what happened. And after we broke up our little aisle-tete-a-tete, I headed straight to the overalls, all the while thinking, Jesus, I am so predictable.
So thank-you for introducing yourself, Sharon Lou, and I am so glad you like my blog.

No. I did not buy overalls. I did not buy velvet, either. I am so fat I couldn't find anything I was even vaguely interested in which would fit my fat body except for an old hippie skirt and a blouse. Jesus. Thank god you can wear anything in Asheville. It is like the capital of Wear Whatever You Want, We Don't Care, which is awesome. Lis will be wearing her petticoats, I will be wearing my overalls, Hank will be wearing his whatever-he-wears and Jessie will be floating around us wearing things that make her look like a dancing hippie nurse musician beam of light.

Okay. I got boys coming over today and I need to get my ass in gear. Kathleen's darling nephew Christopher is coming around noon or so and Owen is coming around one. Two boys! I think that Owen is going to worship Christopher and this is going to be fun. It is a lovely day in Lloyd, Florida and the chickens are already out and finding tasty bugs except for three of the new ones who cannot seem to figure out how to get out of the coop. Three others did and I suppose that's an intelligence test right there. The two flocks are not blending but there doesn't seem to be a lot of conflict, either so that is good. I am wondering what will happen when the new babes reach maturity. Will Elvis want to fuck the girls and kill the boys? Only time will tell. Meanwhile, it is moulting season again and my yard is littered with chicken feathers and I'm getting maybe one egg a day and for the past two days, the eggs I did get got broken (one by Owen, one by me) and the dogs got to eat them directly from the floor.
Sad, sad, sad.
Except for the dogs who were happy, happy, happy.

I think it is Hank's last day of work with the state of Florida. Go either here or here and tell him congratulations on a new life! And check out his blogs because they are probably not like the blogs you already read and he's a great writer and has an amazing eye.
Love you, Hank! I can't wait to Rock-n-Roll with you up that road to Asheville.
(We're going to listen to the Keith book on CD and although it will be the THIRD time I've listened to it, I'm very excited at the prospect. Yes. I am weird. Possibly even a...dork.)

All right. Is everyone happy now? White? You cool with this?