From The Past To The Plastic Present

Well, all I can say this morning is thank all the powers that be that dog vomit doesn't smell like human vomit or I'd be dead. I mean really- holy mother of God- what did that dog eat?

So okay, I have that to say and also that Cypress Gardens is about to become Legoland.

Legoland? Really? I can't even begin to process this information.

Cypress Gardens as I knew it has been gone a long time and that alone makes me sad. Begun in 1936 by Dick and Julie Pope who planted the gardens themselves on a beautiful lake in Winter Haven, Florida, it was for many years one of the biggest tourist destinations in the state. Back in the simpler times I grew up, it was a fine place for a school to take a field trip, for a family to visit. I remember going there sometime in the early sixties before I lived in Winter Haven. We piled onto the school bus and Aunt Flonnie, our lunch room lady AND our bus driver drove us from Sebastian, Florida, to Winter Haven, our little grade-school bodies trembling with excitement and anticipation, our brown-bag lunches in our hands. We had been on two other field trips in our elementary school career- one to McKee Jungle Gardens which was pretty damn exciting and one to a local dairy where they gave us chocolate milk and led us out to the fields to see the cows. Even that was exciting to a bunch of kids, most of whom were dirt poor and never went anywhere but to school and the local corner store.

So...Cypress Gardens! That was just unimaginable. And it did not disappoint. The gardens were beautiful. Even a fifth-grader could recognize that. 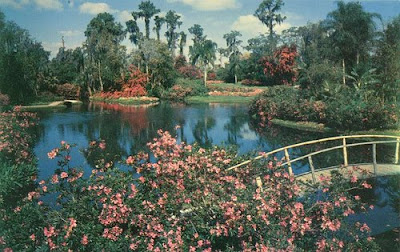 But the water ski show! Women and men doing amazing things on two skies, on one ski! on NO SKIES! Jumping and twisting and turning and flying through the air! Oh my. 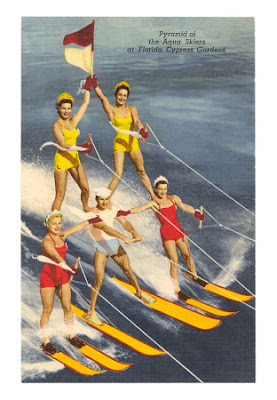 And the Southern Belles in their beautiful dresses posing under trees in front of banks of azaleas, 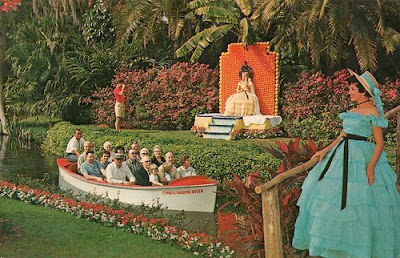 but I have to admit that the thing that stuck with me the longest was the gift shop.

Shopping where I grew up was limited to the grocery store in nearby Sebastian and the little store in Roseland where Ralph and Joy Holtzclaw lived behind the store and when you came in with your six cents to buy a popsickle, Joy would come out from the mysterious world where she and Ralph lived and cut it in half for you and your best friend with the same knife she used to cut bologna with. For real shopping you had to go fifteen miles down the road to Vero where you could buy clothes and go to the A&P or the McClure Drugstore where you could also sit down and order a BLT and a coke. And that was it, babies.

So the gift shop at Cypress Gardens was a thing of wonder indeed. I don't even remember what they sold. Cream orange blossom perfume, I am sure because I bought some and wore a tiny bit every Sunday to church.

I actually lived in Winter Haven from the sixth grade through high school and C-Gardens, as we called it, was still very much a big part of the community. I knew people who worked there, we visited it occasionally, it was the backdrop for many of the group pictures in my high school album, but when Walt Disney came on the TV and told the world he was building a new Disney Land, right there in Orlando, the simple world as we knew it began to slowly die. And of course, eventually, the Mouse did eat Florida and that was that. The Snake-A-Toriums, the Parrot Jungles, the Monkey Jungles, the Alligator Farms, Weeki Watchee, Silver Springs- all of those beautiful old places faded as all the old tourist roads were abandoned for the one Big Highway that led directly to Walt Disney World with its monorails, it's huge hotels, its A-Ticket rides and its Cinderella's castle. Cinderella? I don't know. One of those damn princesses.

And Cypress Gardens lost its luster. The Southern Belles dresses grew more tattered. The water ski show looked silly and dated. And who wanted to see a real garden with plants and trees from all over the world when they could go to Disney World where the boxwoods had been tortured into Plutos and Goofies and there was an entire giant plastic tree with the Robinson's Tree House in it? Who wanted to hear the corny ballpark organ playing behind the ski show when Disney put on a real parade with a marching band and fireworks every night?

Who needed a junky gift shop when Disney offered a shopping opportunity on every corner of Downtown USA in the Magic Kingdom?

They tried to keep it open, Cypress Gardens. But there were no more Van Johnsons and Esther Williams to come and film movies there. The Magic Kingdom ripped all the enchantment of the Old Florida right off and sucked it into itself and left the old tourist destinations which had enchanted and delighted kids and their parents for decades looking decidedly dowdy. Real parrots shit and real monkeys do too, but there is no shit on the streets of Disney World. There is no litter at all. And who needs to see a genuine Seminole Indian fighting a genuine Florida Alligator 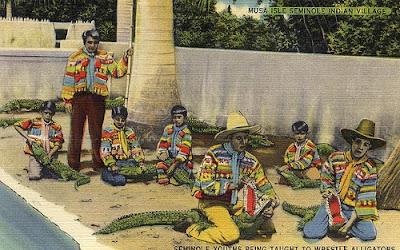 when you could get on a boat and ride around the fake and plastic jungles of Disney's Jungle Cruise where fake, plastic crocodile animatronics threatened you from the bank of the fake river 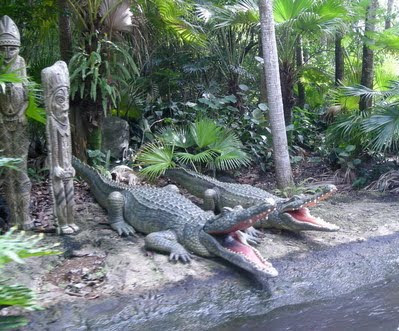 or when you could stand in line for hours to get on a little boat that took you through a Small World and where you could be reminded that yes, it's a small world after all, and here it all is, right here in the maddening world of constantly singing puppet dolls, dressed to represent all the peoples of the world?

Yeah. It's a small fucking world and you can see it all in one day at one location. Past and present, future and foreign. Pay your admission to Disney and you don't have to worry that you've missed a fucking thing.

Ah yah. So now Cypress Gardens is going to be Legoland and I can't even imagine how that's going to work. I guess it's going to look something like this: 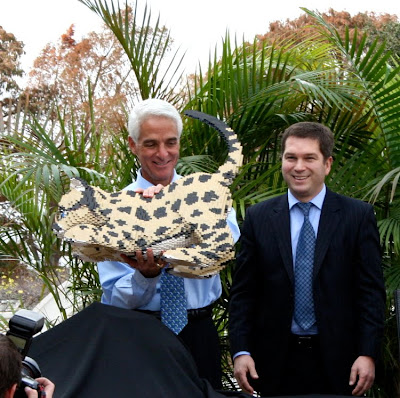 I have nothing against Legos. I really don't. I think they're swell. But what in god's name do they have to do with Florida?

Well. I'm stuck in the old Florida, let's face it. I grieve for its passing. I live in in a house which has stood witness to that passing and yet remains.

And I suppose that right now there are children everywhere who cannot wait to go visit Legoland. I'm sure the gift shop will be mind-blowing.
But there will be no cream orange blossom perfume to be found. Not one tiny orange tube of it. I don't know if there will still be gardens and I seriously doubt there will be death-defying water skiers but there sure will be plastic.

Well. Welcome, Legoland. God knows Winter Haven needs the jobs and tourist business you will bring. We move on, we move on.
And some of us are stuck in the past. Me being one of them.

Little girls will go to Legoland and beg their parents to buy them amazing Legos to build their dream worlds and that's not so bad. But I remember when little girls went to Cypress Gardens and wanted to become this: 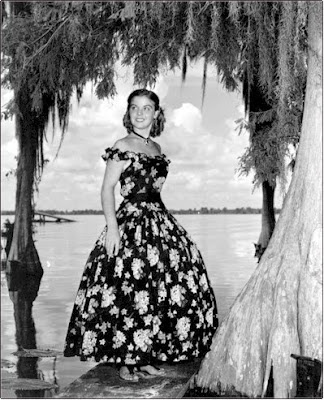 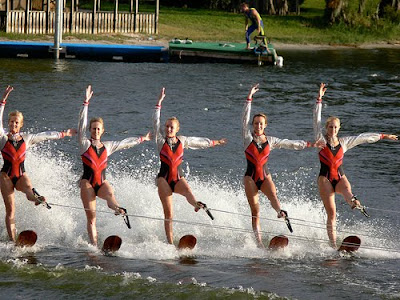 Or went to Weeki Watchee and wanted to grow up to be a mermaid. 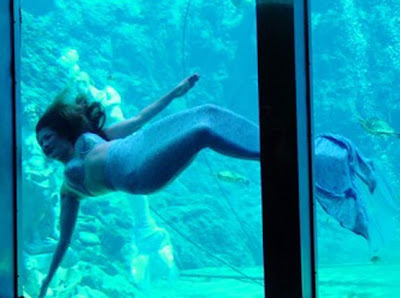 Magic? Enchantment?
Yeah. There used to be some here.
There still is. You just have to know where to find it.

And right now I need to go take a walk in the woods of Lloyd while the woods are still here. And maybe I'll pick up some of the damn plastic on the side of the road on my way home.